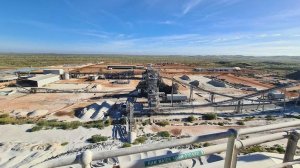 ASX-listed lithium group Pilbara Minerals on Wednesday announced a near A$300-million expansion of its Pilgangoora operation, in Western Australia, bolstering output by 100 000 t/y from late 2023.

The board has made the final investment decision (FID) to go ahead with the P680 project, which will see an increase in the nameplate production capacity of the Pilgan plant from 580 000 t/y to 680 000 t/y of spodumene concentrate.

“This is an exciting milestone for Pilbara. It reinforces the exceptional scale and quality of our Pilgangoora project, which is one of the few hard rock lithium production operations globally that has both the resource size and existing operating platform to enable a rapid scale-up of production to meet our customers’ long-term requirements,” said Pilbara incoming MD and CEO Dale Henderson.

The investment supports Pilbara’s long-term growth strategy to incrementally increase production capacity at the Pilgangoora operation in line with customer and market demand.

“From the outset, our long-term growth strategy has been to develop each stage with a focus on tailoring production to meet demand, while also planning for future expansion opportunities,” Henderson said.

The P680 project will also see the introduction of ore sorting technology to the front-end of the Pilgan plant, which is designed to reject basalt and other non-lithium hosting materials earlier in the production process. Both investments are expected to deliver processing efficiencies and improved lithia recoveries, the company said.

Pilbara will self-manage delivery of the P680 project to help mitigate cost and schedule overruns, with key long-lead procurement to be undertaken prior to the award of key construction contracts.

“We are now able to commence construction of the P680 project in the coming months and expect commissioning of the primary rejection facility during the second half of next year with the crushing and ore sorting facility to follow shortly thereafter,” Henderson said.

Production from the P680 project will support the chemical conversion facility currently under development in South Korea under a joint venture with steel maker POSCO as announced on April 11.

All major regulatory approvals are already in place for construction of the primary rejection facility. Regulatory approvals for the crushing and ore sorting facility will be sought from the relevant authorities and have been allowed for in the project delivery schedule. The existing processing support infrastructure is sufficient to support the project, including tails management facility, power plant and water infrastructure, the company said.

Additional camp rooms and support services will be required to accommodate the expected increase in the combined construction and operational workforce which have been included in the project costs.

In addition, Pilbara said that it continued to receive strong interest in longer-term spodumene concentrate supply contracts from both its existing customer base as well as from other industry participants. Recent positive market demand for spodumene concentrate was demonstrated by Pilbara Minerals' most recent battery minerals exchange auction, which achieved a price of about $7 017/ dry metric tonne.

The P680 project’s estimated capital cost of $297.5-million includes about $50-million of preinvestment capital to assist with the next phased expansion at the Pilgangoora operation – the P1000 project – with a targeted production capacity of up to 1-million tonnes a year.

While the P1000 project remains subject to a separate FID, as well as suitable market conditions and regulatory approvals, the preinvestment capital should mitigate significant cost escalations associated with retrofitting expansion capacity for both the primary rejection and crushing and ore sorting circuits.

In addition, this pre-investment will assist the company in avoiding future operational interruptions associated with infrastructure duplication and brownfield interactions.

The FID for the P1000 project is targeted for late December.

Meanwhile, the P680 project’s capital investment will be funded from existing cashflow and debt facilities, with Pilbara considering a broader restructure of its existing debt facilities.

“This increase in production capacity will enable the company to continue to capitalise on the opportunities in the lithium chemicals market, being driven by rapid transition to decarbonisation through technologies such as electric vehicles and battery storage,” Henderson said.