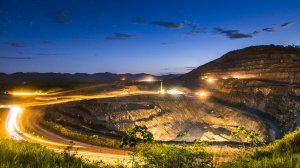 A preliminary economic assessment (PEA) has confirmed the low-cost and long-life potential of Atlantic Nickel and Appian Capital Advisory's Santa Rita nickel/copper/cobalt mine, in Brazil.

The PEA outlines a 34-year mine life, which includes a transition to underground mining after 8 years of openpit production, which recommenced in late 2019.

$355-million in capital is estimated to be required to fund the first 5 years of underground development. A portion of this capital will be funded from cash flows generated from the openpit.

Appian founder and CEO Michael Scherb tells Mining Weekly that the company took the asset “out of bankruptcy” and managed to bring it back into production.

The PEA “is a culmination of all the hard work to prove the viability of the asset”, not only through the restart of production, but also to define the longer term underground potential.

For the openpit operation at Santa Rita, analysis based on reserves has been prepared at a prefeasibility study (PFS) level. The mine is, however, already in operation and has declared commercial production.

The openpit operation encompasses a large openpit and a nearby, smaller satellite openpit along strike. Both pits will be mined with conventional mining equipment and the plan is to be executed over ten phases.

The openpit is scheduled to produce for a period of 8 years to 2028, and mining operations will use standard openpit methods with drilling and blasting, loading and hauling. A stockpiling strategy is used to optimise the throughput rate and metal recovery, the company says.

Appian principal Adam Fisher, meanwhile, adds that this report is the first time the company has been able to incorporate about 100 000 m of new drilling data since the company acquired Atlantic Nickel.

In turn, this brings total drilling on site to about 300 000 m, which Fisher says “is a significant increase” to the amount of resource that was scoped in the original project.

“The prior owners [of the project] had a large openpit mine plan, but Appian instead found a way to extract more of the material at depth while still maintaining a low-cost profile,” he explains.

The Santa Rita process plant, meanwhile, having started production in 2009, was completely refurbished and recommissioned in the second half of 2019, and consists of crushing, grinding, flotation, thickening and filtration unit operations to produce a saleable nickel concentrate.

Additionally, all necessary infrastructure is in place to continue to support the openpit mining and mineral processing operation.

About 25% of the reserve is classified as proven, Appian notes.

Further, the expansion development plan includes an underground project at a PEA level of study that includes inferred resources.

According to Appian, the combined openpit and underground operation will allow for a 34-year mine life.

Fisher, however, says the underground section is “the new conceptual piece of the project” and is backed up with geotechnical study and “sublevel cave mine design and modelling work from experts with high levels of familiarity with this mining method.”

He notes that the expansion leverages much of the same surface infrastructure, and that the underground allows Atlantic Nickel the ability to extract the deeper parts of the resource more efficiently than openpit mining, which had been the plan historically.

The geometry of the deposit and the location below a mined openpit are similar to the Ernest Henry SLC which is successfully operated by Glencore subsidiary, Ernest Henry Mining, in Australia.

The SLC mining method employs long-hole drilling and blasting techniques to extract mineralization sequentially from the surface to the bottom of the deposit and does not require backfill and therefore relies on the overlying waste rock to cave and fill the mined void.

Infrastructure capital and development of the underground project is planned to start at the beginning of 2026, from when production from the underground will ramp up over a seven-year period until full production of 6.2-million tonnes a year is achieved.

Scholz, however, mentions that, while there is some potential to mine more selectively at depth, “there aren’t many higher grade sections of the orebody that justify smaller scale mining methods”, meaning that “SLC is the way to go for the underground”.

After completion of openpit mining, a new downstream tailings storage facility will be needed to store the additional 134-million tonnes of tailings to be produced from the underground mine over a period of 26 years.