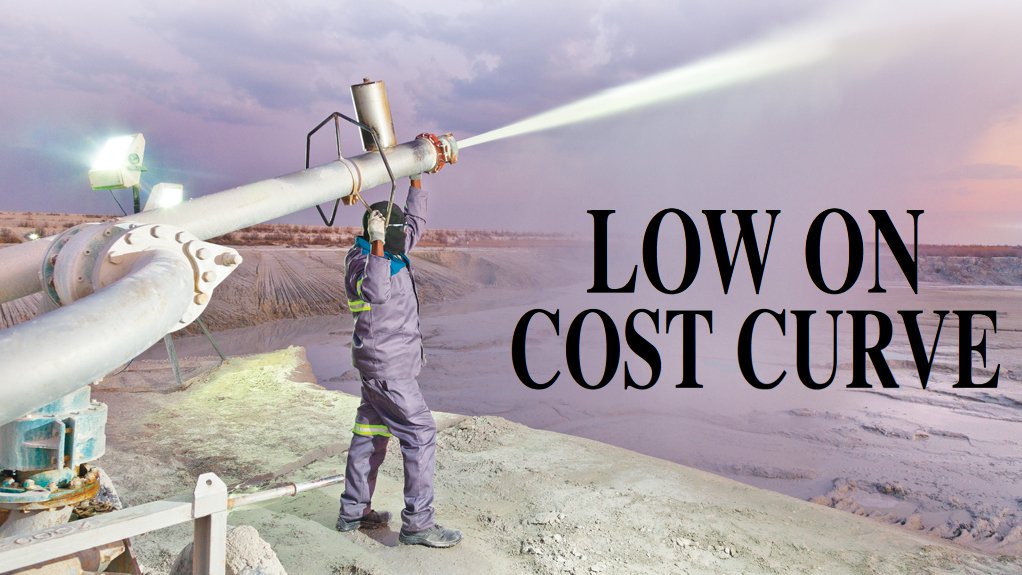 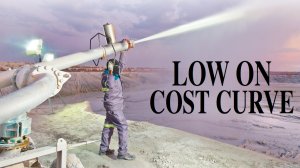 “The theme in the mining industry for some time has been one of capital discipline and cost consciousness. Locally, the rand gold price is not offsetting cost pressures and the South African investment climate is also not conducive to long-term large capital investments, resulting in very few investors being prepared to make a seven- year investment for a vertical shaft, so you have to be creative,” Pan African CEO Cobus Loots tells Mining Weekly.

He notes that few gold producers can produce gold at an AISC of about $500/oz, making Elikhulu one of the most “exceptional” gold projects in the world.

The unit cost of production for Evander’s underground operations will also be lowered, as many of the operations’ services, such as security, logistics and personnel, will be shared with Elikhulu.

The 13-year life of the project further enhances its attractiveness, and Loots highlights that there is potential to extend the project by a further two years if the gold mineralisation extends to the soil beneath the tailings storage facilities (TSFs).

Evander is a perfect candidate for a TRP project, owing to the significant tailings generated at the mine since the first gold pour in 1958. “Many companies are focusing on retreatment projects, but it is important to have critical mass in the resource, which can be built up only over many years, proximity of the dumps and simple metallurgy,” says Loots.

Evander hosts the Kinross, Bracken/Leslie and Winkelhaak TSFs, which will be consolidated into a single facility as part of the Elikhulu project.

“Elikhulu ticks all the boxes in terms of being a massively attractive financial proposition, but it also helps rehabilitate the environment,” Loots asserts, highlighting that the additional surface area resulting from the consolidation will enable the company to develop other projects, such as agricultural or housing developments.

Elikhulu’s project finance comprises R1-billion in debt and an equity component of R700-million. The equity was recently raised in an oversubscribed equity placement and the debt has been under- written by financial institution Rand Merchant Bank. The debt agreements are expected to be signed next month.

“Permitting for the Elikhulu project is going well and we are very much on schedule to produce first gold in the fourth quarter of next year,” says Loots.

During the first phase of the project, the Kinross tailings, with a head grade of 0.32 g/t, will be treated at a rate of one-million tons a month, with expected gold recoveries of between 45% and 50%.

The Evander Tailings Retreatment Plant (ETRP), which was commissioned in February 2015 at a cost of R174.3-million and is expected to pay back its initial capital outlay in less than four years, is currently treating the Kinross tailings at a rate of 200 000 t/m. The ETRP will continue to process tailings at this rate over the life of the Elikhulu project.

Phases 2 and 3 of the Elikhulu project, involving the treatment of tailings from the Bracken/Leslie and Winkelhaak dumps respectively, are scheduled to start in the fourth quarter of 2021 and the third quarter of 2026 respectively.

Elikhulu will provide work for more than 500 people during its construction and create about 245 jobs at the plant when it reaches full capacity.

GOING UNDERGROUND
Loots notes that, while Elikhulu is critical for Evander’s sustained profitability and will be Pan African’s focus in the short term, the underground operations remain a priority. He adds that the recently implemented inititiatives to improve the production efficiency and reliability of the underground operations have started delivering tangible results.

“The key focus for us is to ensure that what we have operates and functions properly, which will entrench Evander as a low-cost producer by improving the profitability of underground operations, while keeping production consistent.”

In April, Pan African completed a R41.5-million stoppage and refurbishment programme for the 7 and 8 shafts at Evander to improve operational efficiencies and the sustainability of the mine’s logistics infrastructure.

Evander GM Tenda Tendaupenyu noted during a media briefing at the mine that month that the operation was in a much better space following the programme. “This is a very old lady, so you would expect that most of the challenges we have relate to ageing infrastructure, which needs to be maintained.”

Pan African group mining engineer Bert van den Berg explained that the “mammoth” 55-day programme required a number of infrastructure components to be replaced, including 7 Shaft’s pump column support infrastructure, a damaged section of the main pump column at 7 Shaft and the water reticulation system between 7 Shaft and 8 Shaft.

Further work included the removal of redundant shaft steelwork at the 7A and 8 shafts, cleaning and refurbishing the 7 and 7A shaft bottoms, and assessing all other underground infrastructure critical to maintaining and sustaining production at Evander.

Mining operations are taking place on the 23, 24 and 25 levels at 8 Shaft, while 7A Shaft is used to hoist ore to the surface.

Van den Berg pointed out that, in October last year, damage caused to the 1.8-km-deep 7A Shaft resulted in the hoisting speed at the mine dropping from 13 m/s to about 8 m/s, significantly reducing the tonnages produced at the mine. Hoisting speeds have now been restored to 13 m/s.

An employee had also been fatally injured at 7 Shaft in February, when the supporting infrastructure for the pump column failed, emphasising the need for further interventions.

Therefore, Pan African initiated engineering studies to assess the condition of Evander’s underground mining infrastructure and reported that critical infrastructure issues needed remedial action to ensure the safe operation of the 7 and 8 shafts.

EVANDER'S UNDERGROUND FUTURE
Loots notes that, while Elikhulu will be the primary growth project at the mine in the short term, Pan African is aiming to take advantage of some of the other orebodies in the area.

Notably, the company is conducting a drilling programme at the 2010 payshoot, which has an estimated resource of about 2.2-million ounces at a grade of about 13 g/t. The resource can also be accessed from 7 Shaft, making the project particularly attractive, as it can be mined at a significantly low capital expense in the near term.

Loots explains that since deep-level gold mining is characterised by fixed costs, Pan African can lower the unit cost of production at Evander by expanding its 7 Shaft operation to mine at the 2010 payshoot, “which could result in a substantial production increase from Evander’s underground operations”.

Drilling of the payshoot started under Evander’s previous owner, JSE-listed Harmony Gold, which expected to complete the programme by 2010. Pan African has embarked on an exploration drilling programme on the offshoot and the first hole has been drilled to a depth of more than 1.5 km.

An update on Pan African’s 2010 payshoot exploration programme is expected to be released ahead of the company’s finalised financial results for the 2016 financial year in September.

Van den Berg tells Mining Weekly that the company’s short-term focus on organic growth will result in it taking advantage of the assets already under its control. “We won’t really look at sinking new vertical shafts from the surface, which will require large capital expenditure and long lead times.”

Also within the Evander complex is the Poplar, Evander South and Rolspruit orebodies. Studies of the orebodies have revealed significant resources with impressive gold grades.

In October 2009, previous owner Harmony Gold started a 24-month drilling programme at Evander South, comprising 43 holes, totalling 24 700 m, with 99 reef intersects. The resultant geological model update was signed off by mining consultancy SRK Consulting, which found that the resource, estimated at just below five-million ounces, occurs at a depth of 250 m to 1.2 km.

In December of the following year, Harmony Gold started a 12-month drilling programme at Poplar. The programme resulted in 23 holes being drilled, totalling 20 106 m, with 77 reef intersects. Using historical and new information, Poplar’s geological model was updated in May 2011, showing an estimated gold resource of about five-million ounces at depths of between 500 m and 1.3 km.

Loots notes that Rolspruit, which is an extension of the orebody being mined at Evander’s 8 Shaft, requires new vertical shaft infrastructure, as it cannot be fully accessed through existing infrastructure.

The Rolspruit resource, which is estimated at about 8.9-million ounces and located at a depth of between 1.8 km and 2.8 km, is characterised by grades that are estimated at 10.86 g/t. However, Loots says “the reality is that nobody is going to put R10-billion into sinking a 2.5 km vertical shaft in South Africa, even though it is a fantastic orebody”.

Since 2015, Pan African has been conducting its own studies at Rolspruit, which Loots notes look “very promising”, owing to the Poplar and Evander South orebodies starting at relatively shallow depths and the impressive grades at Rolspruit. Although developing these projects is not on Pan African’s immediate development horizon, this could change if the company finds a partner willing to share the capital cost, he adds.

“We have to develop our opportunities on a phased basis and the commissioning of Elikhulu, consistent with our timeline and profitability expectations, is a priority. The 2010 payshoot exploration programme is progressing well and is potentially [extremely] attractive from a generic growth perspective. We’ll continue to assess the attractiveness of the other projects and whether they make sense for our shareholders in terms of value relative to other opportunities,” Loots concludes.