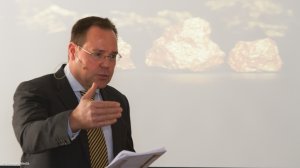 JOHANNESBURG (miningweekly.com) – Gold mining company Pan African Resources, which is completely unhedged except for the hedging of 27 000 oz of gold that will be produced next year from its upcoming Elikhulu tailings treatment project, views hedging with extreme caution.

In response to Nedbank equity analyst Arnold van Graan, Pan African CEO Cobus Loots emphasised the company’s acute awareness of the potential dangers of hedging and pointed out that most shareholders invest in Pan African because of the overwhelming extent to which it gives unhedged exposure to the gold price. (Also watch attached Creamer Media video).

“Hedging's not something we take lightly,” said Loots during question time at the company’s presentation of results, where he called on Pan African FD Deon Louw to provide even fuller insight into the company’s ultra-careful and short-term approach to the risk management strategy used to limit loss from downward commodity price movement.

“We’re very cautious about hedging because, in our experience, a large percentage of hedging often tends to burn companies,” said Louw, who explained that the hedging of 27 000 oz of Elikhulu gold had been specifically done to provide more visibility of cash flows during the period of construction of the tailings project next year, as well as during the following year. Thereafter, the debt would decline to such an extent that further hedging would be unnecessary.

Other than the Elikhulu hedging, Pan African has no hedging.

“We’ve cleaned out our book and we’re completely unhedged otherwise. Having said that, if we see a spike in the rand gold price to R665 000/kg again, there’ll obviously be a desire to lock in on the short-term a couple of ounces. I think it worked very well for Harmony,” said Louw, in reference to Harmony Gold successfully entering into foreign exchange rand-dollar hedging contracts that fixed the exchange rate on a portion of its gold sales to its advantage.

During the expansive question-and-answer session, Macquarie equity research analyst Yatish Chowthee asked whether the company’s production guidance of 190 000 oz-plus of gold for the 12 months to June 30 next year was not too conservative, given the winding down of Section 54 stoppages at Barberton, Evander returning to an expected output of some 75 000 oz and the possibility of additional ounces emanating from the company's strong focus on tailings retreatment.

Loots’ response was that the company is determined to avoid putting itself in a position of being forced to lower its production guidance and that management teams were acutely aware of the minimum production required.

“I can assure you, every single day we focus on getting the tonnes out safely, and getting the grade to the plant. A hundred and ninety thousand ounces might be conservative, but it’s guidance that we need to achieve,” he explained during the question session.

On power supply, it was revealed that initiatives to reduce electricity consumption had been implemented at Evander Mines, where alternative sources of power supply were being investigated.

Asked by Mining Weekly Online whether the scope of the investigation included the possibility of generating renewable energy, Loots emphasised that very careful consideration would be given to whatever the company decided to do on the energy supply front, given that State electricity utility company Eskom was delivering a very consistent supply without any major interruptions.

“On paper, some of these alternatives make sense, but it’s a large capital commitment and it’s not something we’ll take lightly,” said Loots.

On the Ulundi exploration drilling project, it was noted that Ulundi had the potential to be “another Barberton”, but that difficulties had been encountered with locals.

“We’ve had some setbacks, but we haven’t given up hope on that project,” added Loots on the resource that has the latent ability to bring a major stimulus to the economy of the region.