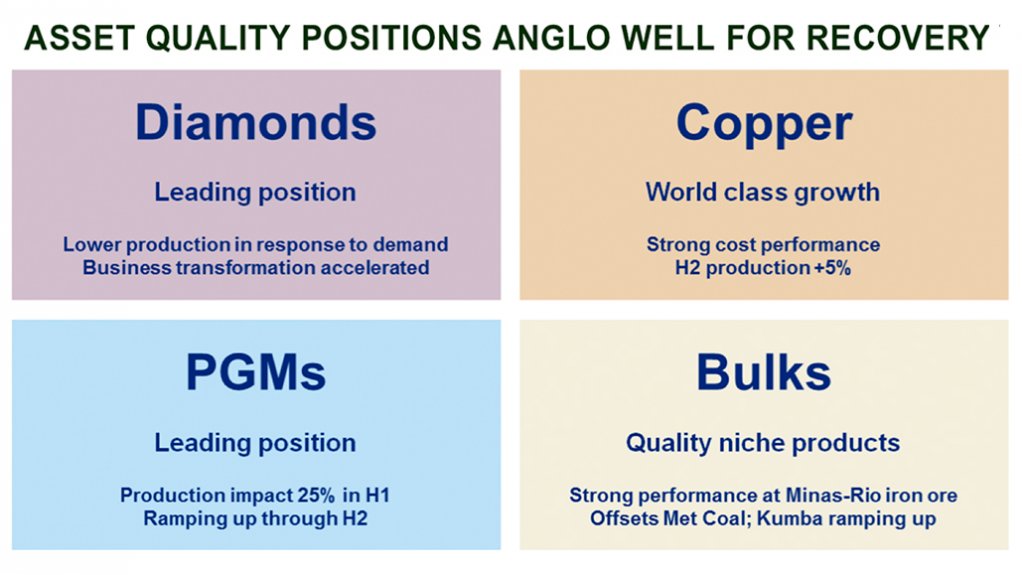 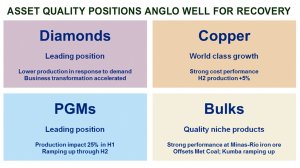 JOHANNESBURG (miningweekly.com) – The first half of 2020 has tested society to its limits, Anglo American CEO Mark Cutifani said on Monday, when the company reported 39%-lower $3.4-billion half-year earnings before interest, taxes, depreciation and amortisation (Ebitda).

“It’s been a very tough six months. Covid-19 has had a material impact on our operations and the business, but certainly, from our perspective, I think we finished the half strong ,and we also believe that taking that improving performance into the second half will be the key to us delivering a much better full-year result,” Cutifani said.

Mining Weekly can report that Anglo acted quickly at the onset of the pandemic to protect employees and host communities through its global ‘WeCare’ lives and livelihoods programme. At the same time, it secured the continuity and integrity of its operations.

The pandemic did materially impact production, with varying degrees of lockdown being the main driver for its 11% overall reduction in output and 16% decrease in revenue, alongside operational incidents at platinum group metals (PGMs) miner Anglo American Platinum's Anglo Converter Plant in Limpopo and metallurgical coal at Grosvenor in Australia.

These reductions were partially offset by strong performances from Anglo’s Brazilian iron-ore and Chilean copper operations.

By the end of June, the company as a whole was back at 90% capacity across the portfolio and the transformation of its underlying operational capabilities helped to deliver the $3.4-billion Ebitda.

"The safety of our people comes first, no matter what. We have made so much progress, yet we are acutely aware that serious incidents continue in our business, none more alarming than at our Grosvenor underground mine in Australia in May. Across the global business, we recorded another all-time low injury frequency rate, representing a further 3% improvement compared to the record low of 2019 and a 62% improvement since 2013.

"Looking beyond the near term, we continue to invest in high quality growth. We still expect first production at our world class Quellaveco copper project in Peru in 2022, despite the prolonged slowdown through the national quarantine, reflecting the excellent progress achieved prior to March,” said Cutifani.

The trajectory of Anglo’s portfolio is towards later cycle products, with development of our recently acquired Tier 1 Woodsmith polyhalite fertiliser project in the UK continuing to progress well, while in May the company set out its plans to exit remaining thermal coal operations in South Africa.

"During the second half, I expect our product diversification and operating model to continue to serve us well. As the global economy recovers, PGMs, copper and iron-ore are all particularly well positioned, while De Beers, as the world's leading diamond business, is taking all appropriate steps to address the effects of acute disruption.

With its products increasingly geared towards a fast growing population and a cleaner, greener, more sustainable world, Anglo is continuing to invest.

Outcomes for the six months to June 30 included: