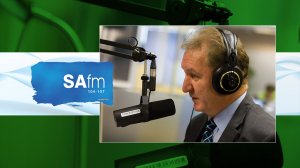 Kamwendo: Reckless oversupply of iron-ore by greedy Australian and Brazilian giants has put 2 400 iron-ore miners out of work in South Africa.

Creamer: The way the big giants of the iron-ore business have acted has had a tongue lashing directed at them in Australia. There have been calls for Senate enquiries in Australia, because these big players in iron-ore, particularly the Australians, imagined that they could just smash all the little guys if they put their foot on the accelerator and produced a lot.

Because of this downturn in the market, they would clean it up and get their opposition out of the way, which is anti-competitive. Of course, they don't do that, we see our own Kumba Iron Ore has come out with a cash-positive position, because the little guys fight when the chips are down. At the same time, it is a victory because they announced on Tuesday, this is the Anglo American group company called Kumba Iron Ore, that they had to cut 31% of their staff in order to make themselves competitive.

That is a massive slice of staff because of the way people in the world act when they try to get control of markets. If they were in other countries there would be all sorts of anti-competition things that would come through to them, but because it is a big wide world it is very hard to keep these people at bay.

We see that even the calls for a Senate enquiry in Australia to make sure that there is not reckless oversupply, because it is damaging the Australian economy as well, have not been heeded. Massive market capitalisation has been wiped off to get 5% extra market share; they have wiped off nearly $3-billion of their own market cap. So, it is just a lose lose lose for everybody.

Kamwendo: The use of platinum fuel cells is gaining momentum globally, with thousands of refuelling stations on the drawing boards.

Creamer: This week again Anglo American Platinum announced their results and, during their results presentation, they talked about the total number of fuel cell refueling stations now in the world being at a level of 140. They have already been built in the world for fuel cells, with another 40 in development and 2 000 planned over the foreseeable future.

We have definitely reached a point where the battery electric vehicle and the fuel cell electric vehicle will be competing head-to-head, almost like you have in the market at the moment with diesel and petrol vehicles. But, fortunately in all the sectors of these vehicle economies, platinum will benefit. If you look at the diesel situation, it appears that diesel market share is going to fall in actual numbers.

The number of diesel vehicles in the world will still be up, which means platinum will benefit from that. People don't understand, and this was brought up at the Anglo American Platinum results presentation, that hybrid vehicles, the mixture between a normal combustion engine and an electric battery, also needs platinum. In fact, the loading is a bit higher because it still has an exhaust and still needs the autocatalyst, so you still have got to get platinum into that. Then the normal petrol vehicle, which the world calls gasoline vehicles, need palladium, which is also a platinum-group metal.

They need that market demand. You can see the price of platinum still not going to the levels that it should. Again, the tough get going when things are tough and we saw that Anglo American Platinum is also in a very strong cash position, but they have to fight their way through these battles.

Kamwendo: The world is heading for a shortage of physical gold as global demand surges for coins, investment bars and gold exchange traded funds.

Creamer: When there is insecurity in the world and there is a fear that the value of your currency will not hold and that the confidence in government’s credible sources of capital start to fall, the world always turns to gold. They feel that their buying power will be maintained if they have gold.

What has been happening though, is people have imagined that a lot of gold is being stored in vaults around the world, because when you look at the Central Banks they show on their balance sheets huge amounts of gold. In reality, people who are observing the situation say these banks also want to get this gold out to make some money from it. They end up with pledges that the gold will return. Their bars go out to a bullion bank, the bullion bank puts it in the market and it ends up as earrings on an Indian woman somewhere, or as jewellery in China.

That can’t come back very easily, but the bank has got a pledge that it will come back at a certain date. People are saying this has gone out in all sorts of directions; gold has gone out of these vaults in such a reckless and crazy way that they just expect that this gold will come back because the gold mines are producing and they will get the new gold on the market and eventually that balance sheet will be covered.

Now there is a fear that this won’t happen, because not all the countries are like South Africa, where the local currency is poor and they are getting paid in dollars; so the gold mines here are doing very well. In many of the jurisdictions, their costs are in dollars as well, so they are not really doing that well even though the dollar price has lifted.

The outlook now, particularly from DRDGold, is that we are heading for a shortage of physical gold. Of course, that will be a wonder thing for the gold mines, because if that does happen and there are defaults from returning of the gold that the gold price should rise and we will benefit.