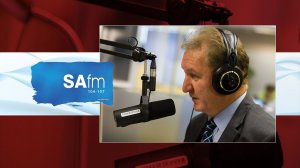 Creamer: This is the Richards Bay Coal Terminal (RBCT). If you go down there and I have just come back from it, it is an example of excellence. We earn enormous amounts of foreign exchange for this and it is so well oiled it is smoother than a margarine. One of the big things about it, is that it is a very good example of how the government sector, public sector and the private sector, including business and labour, can work so well hand-in-glove. It is almost seamless the way the coal comes from 68 mines in Mpumalanga and then enters the market.

One of the things that is happening now, is that there is a weather pattern that they say is just worsening, which means that you are not able to export the coal that you could do. This has got quite a big capacity of 91-million tons, but they are not getting well beyond just over 70-million tons mark of exports. Another caveat is that they are going into Asia in a big way. You can see the coal export recipient of our coal is mainly India. They are the big recipient of the coal. India have said to us, clearly, that they are not going to keep taking this coal in the long-term.

So, it is more of a medium-term. We have a situation where this fantastically excellent way of exporting and earning foreign exchange can be impacted in the short-term here by weather and coal mines that have gone into business rescue. But, in the long-term, I think it will be in the interest of South Africa to start thinking about what other material could come down there that could actually earn the same volume of foreign exchange that may not be coal, because of the world starting to turn its back on coal.

Creamer: If you are not doing a pursuit that is climate friendly, not only will the banks turn their backs on you and they have been doing that for some time, but now the fund managers are saying outright that you are not going to get equity investments from us. One of the biggest of those is Black Rock. When I am talking big, I am talking like R100-trillion worth of investment that these people can put into companies.

They will give you that money free, but you have got to make sure you earn on it, that is called equity. They are saying outright now, that if you are climate change unfriendly, forget about it, we are not going to give you anything. We can see even at Davos the billionaire pilgrims to Davos all they spoke about was what we call environmental social governance (ESG). So there is ESG here and ESG there and ESG simply everywhere. You won’t get money if you are not climate friendly.

Kamwendo: Anglo American has taken the exciting step of employing space boffins to come up with mining solutions.

Creamer: Anglo American is really technology orientated. They are also moving in a new direction that is decarbonising. They feel that this is an essential, but you can see that they are getting the world’s best brains now to help them to do this.

Some of the people that were involved with Planetary Resources and some of those that are actually aspiring to mine the heavens, are now back to earth here in Limpopo. First Mode, of Seattle, has been brought in by Anglo American to make sure that when they produce this world first hydrogen fuel cell, which will mine platinum group metals at Mogalakwena in a very clean way, this will be done with great excellence.

To make sure that everything goes through well, they have brought in the space boffins who are among the most brilliant minds in the world.