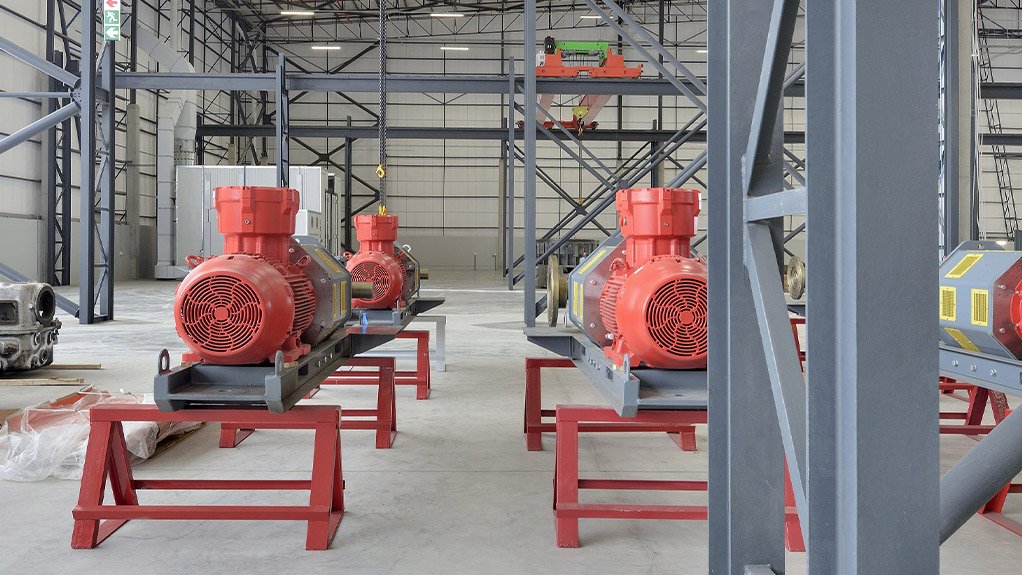 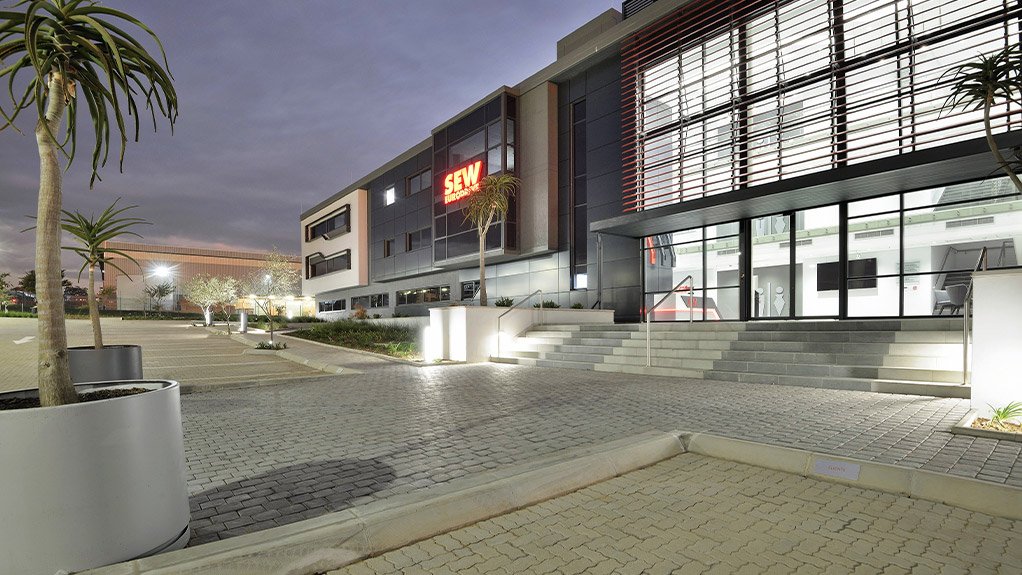 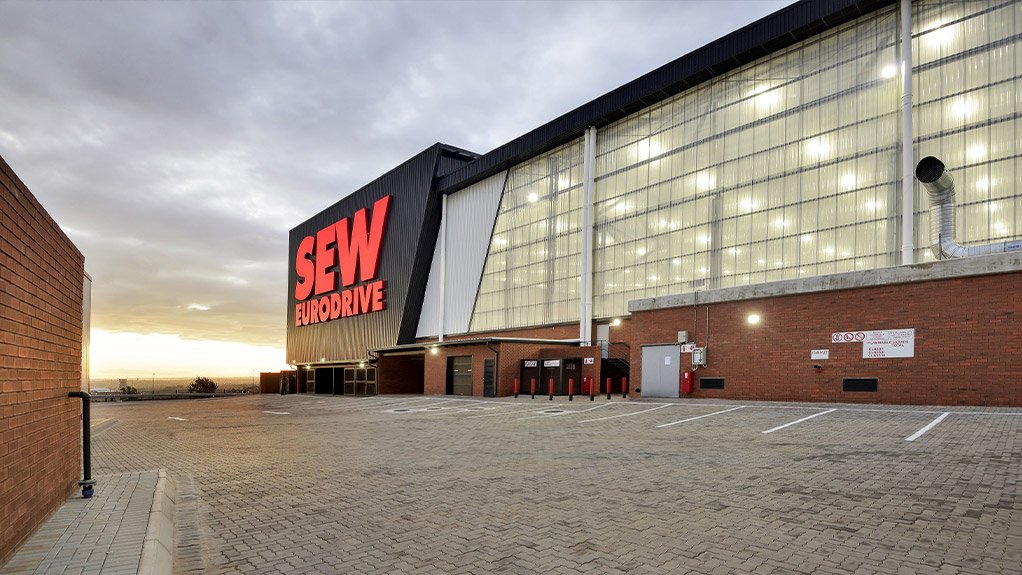 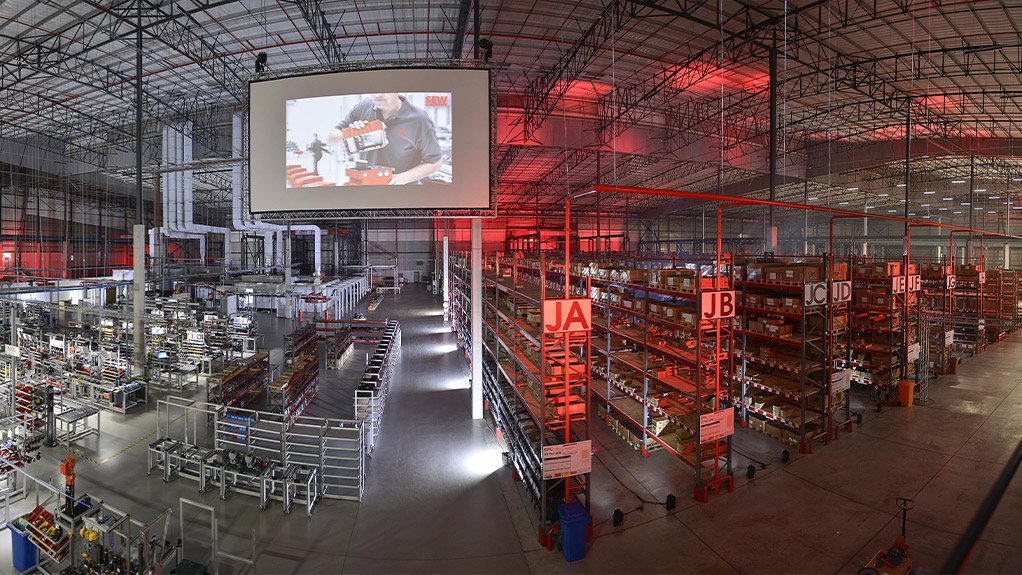 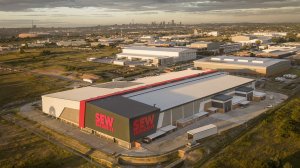 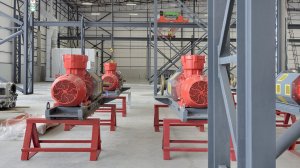 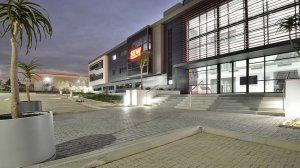 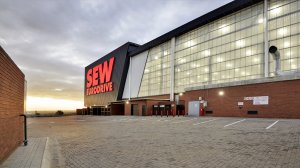 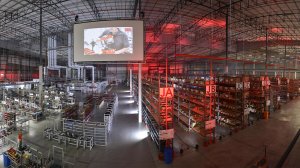 SEW-EURDRIVE’s state of the art headquarters
Built and equipped at a cost of R200 million the new SEW-EURODRIVE facility makes extensive use of the latest technologies to effectively network people, processes, services and data.
The new facility will play a pivotal role in allowing SEW-EURODRIVE to service the burgeoning Africa market efficiently.
The expanded warehousing gives SEW-EURODRIVE the ability to increase stock levels, a huge benefit given the problems currently affecting the global supply chain.
SEW-EURODRIVE has used its own technology to automate operations at the Aeroton facility.

SEW-EURODRIVE South Africa, a specialist in drive and control technologies, moved into its new state-of-the-art 26 000-m2 headquarters complex in Aeroton, Johannesburg, earlier this year. The new complex more than triples the floor and factory space that was available at its previous premises.

Built and equipped at a cost of R200 million and modelled on SEW-EURODRIVE’s showcase factory in Graben-Neudorf in Germany, the facility – which accommodates approximately 150 employees– makes extensive use of the latest technologies to effectively network people, processes, services and data.

The investment reflects SEW-EURODRIVE’s confidence in the future of both South Africa and the African continent. The company points out that Africa is regarded as the world’s next growth market. Home to 17 % of the global population in 2019, it is expected to account for 26 % by 2050, as well as an estimated US$16,2 trillion of combined consumer and business spending.

Commenting on the investment, Raymond Obermeyer, Managing Director of SEW-EURODRIVE South Africa, says: “This is a bold step that demonstrates our commitment to being part of solving South Africa’s problems and developing the economies of countries across Africa.”

SEW-EURODRIVE currently services 23 countries throughout the African continent from South Africa. “With the implementation of the African Continental Free Trade Area (AfCFTA) protocol, which came into effect in early 2021, and a push to grow manufacturing on the continent, we are expecting African markets to account for around 50 % of our turnover within the next few years,” says Obermeyer.

The new facility will play a pivotal role in allowing SEW-EURODRIVE to service the burgeoning Africa market efficiently. It houses not only the group’s African head office but also an assembly plant for industrial gears and electric drives, expanded central warehousing and repair facilities. It also encompasses assembly and repair of all VSD’s, AGV’s and Servo motor technology. SEW-EURODRIVE also employs multiple mechanical, electrical and mechatronic engineers to further support technical customer queries.

The expanded warehousing gives SEW-EURODRIVE the ability to increase stock levels, a huge benefit given the problems currently affecting the global supply chain. It means the company’s customers in Africa will be able to able to get orders – for new equipment or spares – fulfilled with minimal delay.

“The new facility allows us to service our customers more efficiently, reducing the high cost of unplanned downtime and allowing them to adhere to their scheduled maintenance programmes,” Obermeyer states. “Ensuring our customers’ continued productivity has been the key driver behind the development of our new premises.”

Over a three to five-year period, SEW-EURODRIVE will incorporate further 4IR technologies, including automated assembly machines and guided vehicles, into the Aeroton factory at a cost of an additional R200 million.

“We are working hard to shape the factory of tomorrow with system solutions for Industry 4.0 and a focus on raising productivity and implementing smart maintenance while, at the same time, providing ergonomic support for the people working in these facilities,” notes Obermeyer.

SEW-EURODRIVE has used its own technology to automate operations at the Aeroton facility, with the main production conveyor being based on the company’s high-tech MOVI-C® all-in-one modular drive solution which is now being introduced to the African market. MOVI-C® had its official African launch at the recent Electra Mining Africa 2022 show in Johannesburg.

In essence, MOVI-C®C is a suite of products – which includes controllers (PLCs), variable speed drives, gear motors and servomotors – that automates drive applications, whether they be simple or very complex.

The installation – which has resulted in a 40 % productivity gain – includes the MOVIGEAR® mechatronic drive system. The MOVIGEAR® units – which combine an energy-efficient IE5 motor, gear unit and corresponding drive electronics in a single housing – control and drive the production conveyor. The modular nature of the installation means it can easily be extended in the future should the need arise.

The assembly line for geared motors can accommodate 7 000 units per month while assembly of industrial gear (IG) units is currently being ramped up to between 100 to 140 IG units per month, doubling current capacity. New spray booths and automated oil filling stations have been installed to cater for these volumes.

All local assembly is conducted in accordance with SEW-EURODRIVE’s global quality standards, with the assembly of VSDs, servo motors and other sensitive equipment being conducted in an isolated clean area – with copper grounding and anti-static mats – of the facility. The assembly and logistics processes are also now incorporated into SEW-EURODRIVE’s SAP system, which gives better traceability and visibility of all orders as they move through assembly processes.

Among the products to be produced at the new facility  are SEW-EURODRIVE’s modular air-cooled condenser (MACC) drives, which have already experienced excellent sales in South Africa with two units having been installed recently in the Northern Cape and a further 24 units at a Limpopo site.

SEW-EURODRIVE will stock a single casing size with multiple components and specific ratios depending on which power station requires the drive. This modular approach will enable the new facility to custom assemble MACCs at a rate of approximately two to three units a week, drastically cutting the long lead times typically associated with equipment of this type.

Illustrating the benefits of the new Johannesburg facility, SEW-EURODRIVE anticipates being able to assemble and test customised M1 units within two to three weeks from an order being placed. Previously they had to be imported from overseas with lead times of between 16 and 20 weeks.

Allows delivery times to customers to be cut dramatically