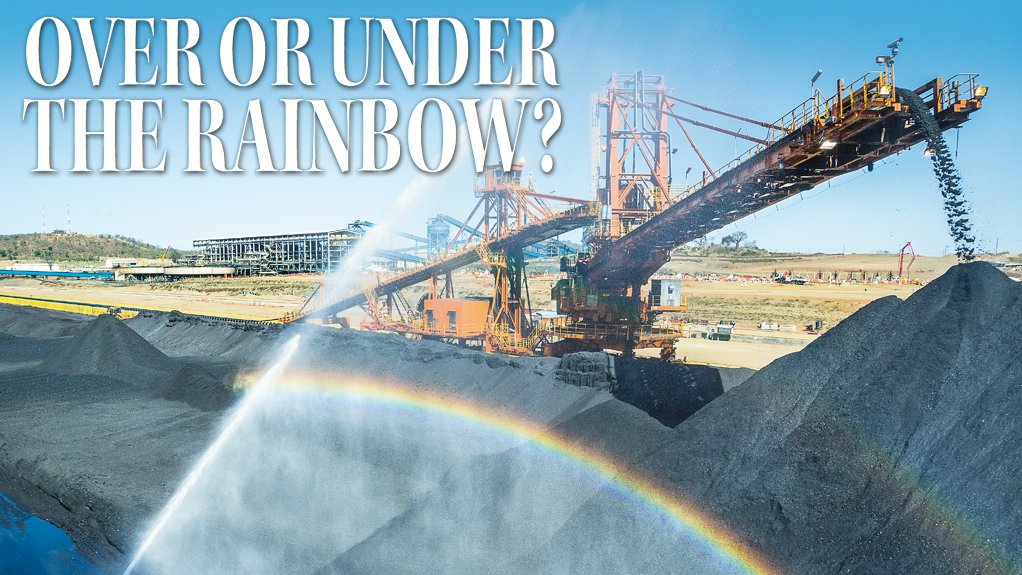 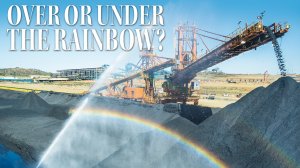 JOHANNESBURG (miningweekly.com) – Although Mozambique is an established producer of heavy mineral sands and high-quality rubies and, although important high-quality graphite projects will soon start operation and gold is likely to be added to the country’s mining portfolio in the near future, it cannot be doubted that the mining sector in the south-east African country remains dominated by coal. High-quality hard coking coal, or metallurgical coal, to be precise, is mined in the western and landlocked Tete province.

According to the African Economic Outlook 2015, mining and quarrying accounted for 1.6% of Mozambique’s gross domestic product (GDP) in 2009 but for 3.6% of GDP in 2013: a large amount of that increase would have to be credited to the coal sector. Further, the extractive sector was the fastest-growing part of the Mozambique economy in 2014, at 22%, and this was largely driven by increased coal exports. The African Economic Outlook 2014 reported that Mozambique coal production in 2013 was 7.5-million tons a year (Mt/y), representing a 4.8-million ton increase over the 2012 figure. And, in 2012, coal from Tete increased the country’s GDP by 0.8% (reported the Correio de Manhã newspaper in January 2013).

However, Mozambique’s coal sector has been afflicted by infrastructural inadequacies, particularly in port and especially railway capacity. Worse, global coal prices have fallen by half since 2007. The Indian newspaper The Economic Times reported in July: “Mozambique’s coal rush is officially over . . . the coal boom has come apart at the seams, hobbled by low prices, overblown expectations and a rail and port network that remains woefully inadequate.”

According to independent consultant geologist Andy Lloyd (cited by The Economic Times), as of November last year, the Mozambique government had granted, for Tete, 124 exploration licences and approved 11 mining concessions. But only four operating licences had been issued. The African Economic Outlook 2015 reported that all coal mines in Mozambique are currently losing money. Currently, coal mining in Tete is largely the preserve of big international corporations with long-term plans and lots of money.

The biggest single problem has probably been the inadequate capacity of the 575 km Sena railway line from Tete to the port city of Beira. Currently, this is just 6.5 Mt/y. The line has also suffered from flood damage in the past couple of years. However, a major upgrade undertaken by the Mozambique Ports & Railways Company (better known, from its Portuguese initials, as CFM) will increase this capacity to 20 Mt/y by the end of this year. This upgrade is reportedly costing about €163-million.

Brazilian group Vale is certainly big and in Mozambique for the long term as well as being willing to make significant investments in the country. Its Moatize mine is the first and still the biggest coal operation in the country. Moatize Phase 1 has a production capacity of 11 Mt/y, but actual production in 2013 was four-million tons and, during the first half of this year, 2 424 000 t. The major reason for this constrained production is the inadequacy of the Sena line, which must also carry coal from at least two other operations.

Nevertheless, Vale authorised the development of Phase 2 of Moatize, which will double the mine’s capacity and achieve that production in 2017. Moatize produces high-quality coking coal, which the Brazilian miner markets as Chipanga Premium HCC. Other good news is that Vale had little, if any, trouble in selling 15% of its local subsidiary, Vale Mozambique (which owns and operates Moatize) to Mitsui, of Japan. Vale now holds 81% of Vale Mozambique, having originally owned 95% (5% is locally held).

To deal with the logistics problem, Vale has developed the Nacala Logistics Corridor (Corredor Logístico de Nacala, in Portuguese, abbreviated to CLN). This has involved the construction of a new coal terminal at the deep-water port of Nacala, as well as the refurbishment of 684 km of existing railway and the construction of 228 km of new railway, for a reported total capital expenditure of $4.444-billion. The CLN runs through Malawi as well as Mozambique. Vale had originally hoped to have already started exporting its coal along the CLN by now but severe flooding damaged the line last year, forcing a delay. In July, there was more frustration for the company when a nearly complete coal stacker collapsed at the Nacala terminal. The CLN should, nevertheless, start full operations in the near future.

Vale originally held 80% of CLN but, as a result of a deal announced in December (at the same time as the Vale Mozambique transaction), the Corridor is now owned 35% by Vale and 35% by Mitsui, with the remaining 20% held, as before, by CFM. The Brazilian group expects to export 22-million tons of coal in 2017, of which 18-million tons will be along the CLN and through Nacala and four-million down the Sena line and through Beira, leaving the rest of the expanded Sena capacity for the other miners in Tete.

Although Chirodzi is linked to the rail network (it has its own 8 km long railway siding) and although the company owns its own railway locomotives and wagons, the operation has, like the other coal operations in Tete, suffered from the capacity limitations of the Sena railway. Although hoping to benefit from the programmed improvements in the country’s coal export infrastructure, Jindal is also considering a coal slurry pipeline from the mine to Beira.

The number three operation in the province is Benga, with a current capacity of 5.3 Mt/y. This mine is 65%-owned by India’s International Coal Ventures Limited (ICVL). This is a special-purpose vehicle created at the initiative of the Indian Ministry of Steel, with the purpose of obtaining metallurgical and thermal coal assets in foreign countries, in order to assure the supply of imported coal. Its shareholders are the Steel Authority of India Limited (SAIL), Rashtriya Ispat Nigam Limited (a steel company), the National Mineral Development Corporation and NTPC (India’s largest power producer). Coal India was a shareholder but has pulled out. All these companies are wholly or predominantly State-owned. ICVL also owns 100% of the Zambeze and Tete East coal projects (also in Tete).

But, again, the logistical difficulties, driving up costs, and the fall in global coal prices, have forced ICVL to restrict production at its Mozambique mine to about 3.6 Mt/y. In April, The Financial Express newspaper in India reported that, of this total, 35% was coking coal, 10% thermal coal and 55% comprised rejects. The coking coal was being exported to India but the thermal coal and rejects were being stockpiled at the mine. Complicating matters, actual mining operations at Benga are contracted to another company in a deal that will expire in the coming months. Once ICVL takes over the actual mining, it expects to be able to cut costs by using the low-cost mining expertise of its Indian shareholding companies.

Currently, however, Benga is losing about $7.5-million a month, reported The Financial Express. Under these circumstances, it is perhaps not surprising that the other shareholder in Benga, Indian private-sector group Tata Steel, announced in February that it would make no further investments in the operation, in which it has a 35% stake, and that it was planning to sell that shareholding. ICVL did, however, buy its stake in Benga very cheaply last year for a reported $50-million from major miner Rio Tinto, which had bought the project for some $4-billion in 2011 (and so suffered a massive loss on the project).

A much smaller operation is Minas Moatize. This was owned and operated by London-based Beacon Hill Resources (BHR) and, with proven reserves of 25.45-million tons, was aiming to produce at least 600 000 t/y of hard coking coal (plus thermal coal). However, hit by the fall in world coal prices, having to put the mine into care and maintenance in November 2013 and unable to secure funding, BHR could not service its debts and went under at the start of this year. The Minas Moatize operation was put up for sale. However, BHR owned no more than 50% of Minas Moatize – Consolidated Minerals was a joint venture partner in the project, while India’s Global Coke subsequently acquired 26% of it. Consolidated Minerals now seems to be supervising the mine.

Another project is Minas de Revuboè, which is jointly owned by Australia’s Talbot Group, Japan’s Nippon Steel and South Korea’s Posco. Originally it was meant to develop a predominantly coking coal mine in the Moatize district, adjacent to Vale’s and ICVL’s operations, with production forecast to potentially reach 17 Mt/y. In 2012, Anglo American proposed to buy a majority stake in the project for $555-million, only to abandon the idea in March 2013. Minas de Revuboè was awarded a mining concession (4064C) on April 1, 2013, which it reported in a press release dated August 25, 2013. This remains the most recent press release on its website. Today, Bloomberg Business reports that Minas de Revuboè “offers coking and thermal coal exploration and mining services in the district of Moatize, Mozambique. The company is based in Maputo, Mozambique.”

According to the African Economic Outlook 2015, Mozambique’s power demand is increasing by 15% a year. This provides an opportunity that London (AIM) listed Ncondezi Energy seeks to exploit. Unlike the miners mentioned, Ncondezi is focused on mining thermal coal and it is not interested in exporting it; rather, it seeks to turn that coal into electricity and sell that. Also located in Tete, the company plans to build an integrated mine and power station, which will be developed in stages, from 300 MW in the first stage to 1 800 MW in the final stage. The electricity will be sold to national power utility Electricidade de Moçambique (EdM), with which Ncondezi concluded a conditional commercial power purchase agreement last year. Currently, the plan is to commission the mine and plant in 2017 and start commercial operations during the first semester of 2018.

Power generation also offers the other miners an opportunity to exploit the thermal coal they are producing as a by-product to their coking coal output. Thus, Mozambique has approved the construction of a 600 MW power station at Moatize by ACWA Power Moatize Termoelectrica (a consortium including Saudi Arabia’s ACWA Power, Vale and Mitsui) that will use thermal coal from Vale’s mine. It will be developed in two phases, each of 300 MW, with the first phase reportedly costing $1-billion. Of the 300 MW in the first phase, 250 MW will be used to power the mine and the remaining 50 MW sold to EdM.