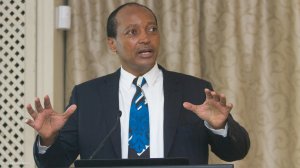 In presenting ARM’s latest set of interim financial results, Motsepe spent time explaining how many of ARM’s broad-based BEE trust shareholders had opted to cash in on their ARM shares to meet their own personal financial commitments. (Also watch attached Creamer Media video).

The ARM executive chairperson confided that as much as ARM and many other mining companies encouraged their BEE shareholders to hold on to their shares so that obligatory company BEE credentials could remain intact, the opposite was being widely experienced.

“They sell. You’ve got teachers, small business owners, shebeen queens, spaza shop owners, domestics who say to me, Patrice, my son or my daughter is at university and I can’t pay the university fees. I’ve got shares in African Rainbow Minerals as part of the ARM BBBEE and they have done well and I have to sell,” he told analysts and journalists.

Rather than companies being legally obligated to retain 26% BEE credentials in perpetuity, Motsepe indicated his preference for a once-empowered, always-empowered arrangement with this comment: “So, it’s another discussion we will have. We shouldn't try and do weird things. There’s a way in which the market works globally and there’s a way in which the market succeeds and we will succeed when we play by the rules of what makes markets successful.”

ARM, he reported, was in the process of seeking shareholder approval to restructure its ARM BBEE Trust to ensure a permanent and sustainable funding solution for the trust in the face of current low share price challenges.

“I called a meeting with all of our ARM BBBEE shareholders and I told them that I wished I was in a business that never went down but those sorts of businesses don't exist.

The Chamber of Mines of South Africa, which is in the process of seeking clarity on the assessment of the continuous consequences of previous BEE deals, has calculated that the value of BEE transactions since 2000 amounts to R205-billion in 2014 money terms, resulting in meaningful economic value transfer of R159-billion.

ARM’s headline earnings per share more than halved in the six months to 223c a share and basic earnings were a loss of R996-million compared with R801-million profit for the same period last year, hit by a R1.4-billion attributable impairment of the Lubambe copper mine assets in Zambia.

The dollar prices of ARM's iron-ore, coal, platinum, copper, manganese, nickel and chrome interests were down across the board.

In response to journalists on the economic challenges facing South Africa as a whole, Motsepe said when it came to business and country, a focus was needed on aspects that were in the best interests of jobs, the poor and business growth.

On the cost front, ARM managed to reduce its on-mine unit costs to levels below the inflation rate in the half year to December 31. (Also watch attached Creamer Media video).