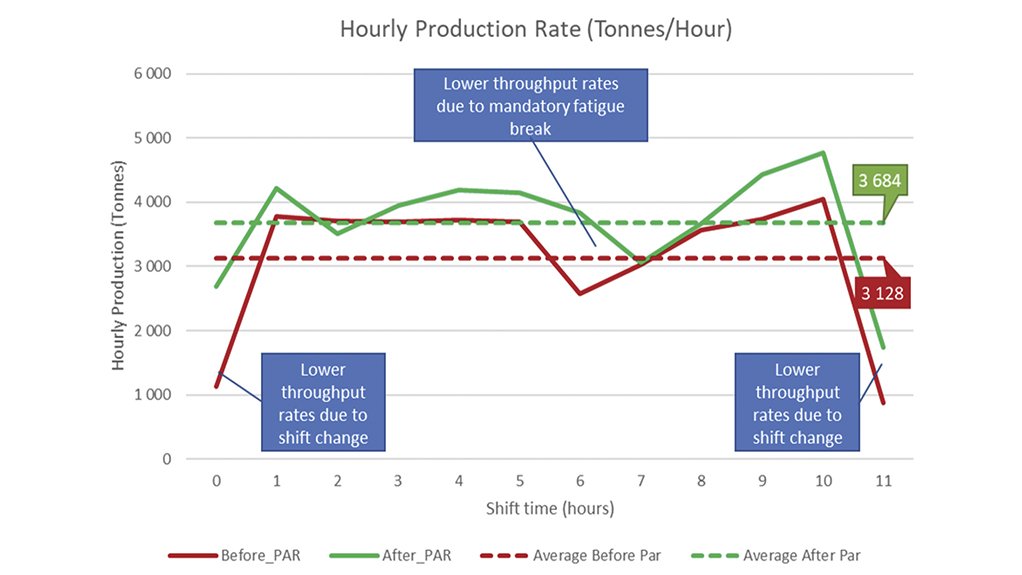 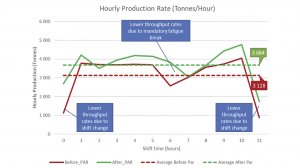 Improving drill and blast and load and haulage are critical upstream processes that need to be optimised to enhance downstream processes such as crushing and conveying. However, another critical factor to improving downstream efficiencies is ensuring that crushers are evenly fed, as poor feed arrangements can have consequences on the crushers’ performance and the bottom line.

A large coal mine in South Africa has been a long-time customer of mine services company Modular Mining, utilising the DISPATCH fleet management system to optimise their haul cycle. In this case study, the mine further leverages the DISPATCH system to optimise downstream processes and maximise their crusher throughput, adding more value across the mining value chain.

The South African mine was faced with the challenge of an underperforming crusher. The mine operates three crushers in total and advised Modular Mining’s Performance Assurance (PA) team that Crusher 1 was not meeting its hourly set target of 3 480 t/h. In comparison, the other two crushers continued to meet their hourly production targets.

Concerns were raised about this because in addition to the crusher not meeting its production targets, a poorly fed crusher can affect its mechanical components performance and life. It could also compromise productivity and reliability, so it was crucial that the mine identified and addressed the issue.

In large scale operations, this can occur when haul truck drivers prioritise certain crushers over others. It was highlighted to the PA team that if the coal mine continued to operate under these same conditions, it would be at risk of not meeting its annual target, which would have resulted in possible contractual penalties for the mine.

By working collaboratively with Modular Mining’s PA team, the mine set out to improve Crusher 1’s productivity to 3 480 t/h and meet its set targets whilst ensuring that all crushers continued to have an evenly distributed throughput. To ensure the mine would achieve this, the PA team conducted three scenarios, all addressing different aspects of the mine’s operation, to determine what was causing the low productivity at Crusher 1.

The PA team analysed the mines feed rate logic to determine whether there was a miscalculation on the trucks required to feed Crusher 1. This can typically happen as shovels move around the mine and the trucks, which are required to service that shovel without queuing, are not updated in DISPATCH.

The second scenario involved Modular Mining’s PA team conducting a shovel priority test. Shovel priority involves ranking the shovels based on the material needs. This means that if a shovel is mining more material than the others, it gets priority, and the DISPATCH system ensures that that shovel gets full coverage in terms of trucks being supplied to it. Therefore, the PA team checked if the shovel priority algorithm in DISPATCH had a customised code that may have been causing the wrong calculations, resulting in not enough trucks being sent to Crusher 1.

The final scenario involved the PA team looking into the use of ‘region locks’. This consists of locking shovels to a region within the mine based on the material being mined and delegates a certain number of trucks to run freely amongst the shovels within that locked region. In addition to this, the mine set Crusher 1 as the priority crusher for this region.

After the three scenarios had been implemented and analysed across three 12-hour shifts, the PA team met with the mine management team and presented each scenario’s results. The PA team determined that Scenario Three: Operational Influence, showed a significant improvement in the throughput of Crusher 1, while the other methods had no impact.

The results indicated an improvement in the average hourly productivity of Crusher 1, which was a direct result of the PA teams analysis and implementation of scenarios. The average throughput per hour increased from 3 128 t/h to 3 684 t/h.

This improvement resulted in an hourly average production improvement of 17.7%, which translated to 556 t/h or 6 116 t/day. The throughput increased by 183 480 t/m of coal and slightly above two-million tons of coal annually.

By leveraging the Modular Mining Performance Assurance programme, the mine successfully improved its hourly target for Crusher 1 while also enhancing the productivity of Crusher 2 and Crusher 3.