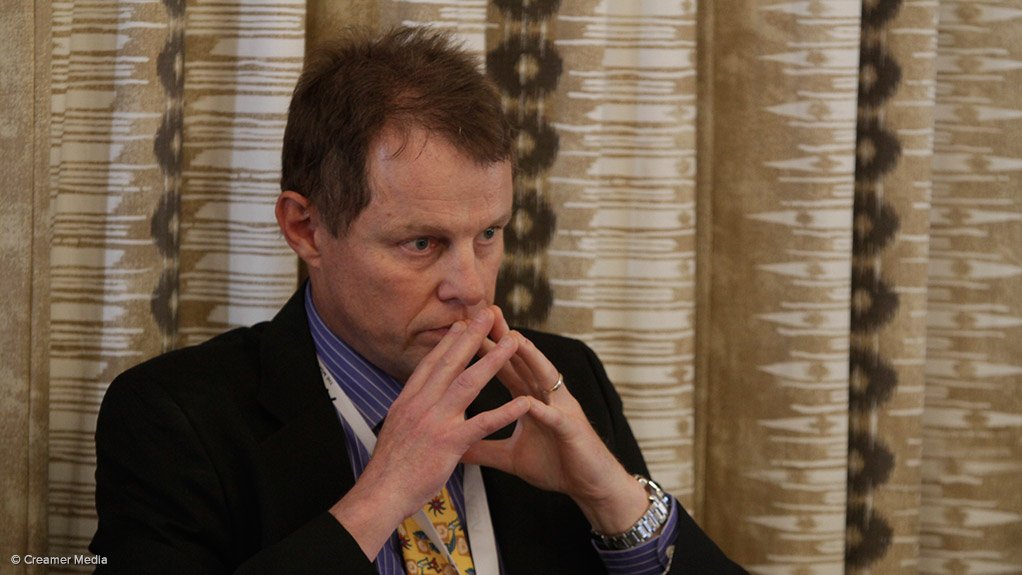 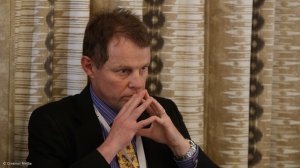 He notes that, as a result of low investor confidence in the country, little diamond exploration activity has recently been undertaken locally, leaving many potential mining opportunities unexplored by modern technologies, such as detailed ground geophysics and microdiamond analyses.

Work at the site began in February, with a budget of R2-million set for this year’s exploration activities.

Campbell explains that the attraction for diamond exploration in the area is Vutomi presenting a portfolio of twenty high-interest kimberlites in ten prospecting rights, covering about 50 000 ha of prospective ground, with the potential for further additional kimberlite discoveries. These properties span the project development pipeline from exploration through to the inferred resource, with Frischgewaagt as the flagship project.

Frischgewaagt is an eastward extension of the mined-out Marsfontein kimberlite pipe, a joint venture operated by De Beers and diamond miner Southern Era Diamonds until 2000. Marsfontein was operated for two years and the economics were such that the entire capital cost of the operation was recouped in less than four days. Marsfontein’s run-of-mine grade was 172 ct/100 t at a bottom cutoff of 1.2 mm.

The purpose of Botswana Diamonds’ drilling programme, which consisted of core and percussion holes, was, thus, to increase the geological confidence in the Frischgewaagt kimberlite dyke/blow complex, which is about 6 km long. Thirty-four percussion holes, totaling 1 459 m, and nine diamond drill holes, totalling 432 m, have been drilled along a 1 580 m strike length of the kimberlite dyke/blow complex.

The width of the kimberlite dyke/blow system is between 1 m and 2.7 m, with two wider areas, or blows, identified. To test the vertical continuity of the system, a 104 m hole was drilled, chiefly in kimberlite.  Petrographic analysis of the samples has resulted in classification of the dyke as a Group 2 Olivine Phlogopite-rich magmatic kimberlite, with the blows being volcanoclastic kimberlite. The large grain size and high abundance of olivines are indicative of high grades.

A population of more than 200 garnets have also been microprobed and indicate similar mineral chemistry to the nearby Marsfontein mine. A 200 kg core sample has been consigned for microdiamond analyses by Johannesburg-based mining consultant MSA Group Services, with results expected this month.

In work undertaken by Vutomi, prior to the earn-in arrangement with Botswana Diamonds, to test the diamond potential of the surface and near-surface kimberlite 467, diamonds yielding 247 ct were recovered from the processing of surface material.  The largest diamond was 3.66 ct and the parcel had an average size of 0.53 ct a stone.  The sale of these diamonds achieved a rough-diamond value of $180/ct and a modelled value of $259/ct at a bottom cutoff of 2 mm.

“The deal with Vutomi was only announced in February and within two months, we were able to issue positive results . . . Particularly notable was the geological continuity of the kimberlite dyke/blow swarm and the discovery of volcanoclastic kimberlite, which indicates blows within the area of investigation.”

Detailed ground geophysical testwork has also been undertaken by geophysical services provider Geofocus to determine the most effective ground geophysical technique for delineation of the further lateral, principally eastern, extent of the system.  The result of this work was the selection of the frequency-domain electromagnetic technique using MaxMin and EM34 systems, which was implemented last month and will result in the two-dimensional delineation of the kimberlite dyke/blow system and the identification of further drilling targets.

MARKET FUNDAMENTALS
“Exploration remains the tough part of the diamond pipeline, with few major discoveries of late. Global rough-diamond production is estimated at about 140-million carats for 2017, valued at $16-billion, and will peak over the next three to four years. Thereafter, production is expected to start to trend downwards, which will impact on global market dynamics,” says Campbell.

Campbell notes that key challenges facing diamond producers generally centre around the timing of capital expenditure and the reduction of unit operating costs in relation to the prices achieved for rough diamonds to ensure their sustainability.

“The rough diamonds business is in good shape for now. Although the pricing policy of the main suppliers to the market will dictate how the year pans out. No major shocks are expected if a steady hand is applied to pricing.”

He adds that the downstream market for polished diamonds has been relatively stable, with demand in the US, Hong Kong and China this year remaining consistent with 2016.

While Campbell notes that, internationally, South Africa is often perceived as a high-risk business destination, with complex bureaucratic obstacles creating barriers to development, he says the country has sophisticated fixed and banking infrastructure in place, as well as a long legacy of profitable diamond production.

“The Vutomi team has strong commercial skills and has overcome any bureaucratic hurdles it has faced, and, together with sound local ownership, has delivered the Frischgewaagt package of highly prospective ground, which we are exceptionally excited about,” he concludes.