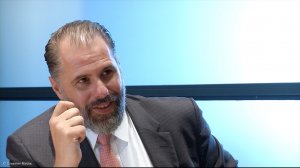 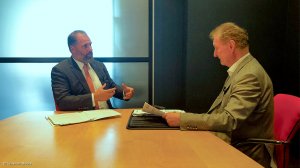 JOHANNESBURG (miningweekly.com) – An investment pavilion will be introduced at the upcoming Investing in African Mining Indaba to drive capital into African mining with even greater intensity, MD Alex Grose said on Thursday.

Speaking to Mining Weekly Online during a media roundtable, Grose also revealed that more time would be devoted to the innovative investor battlefield feature, the Mining 2050 topic dealing with the future of mining would be expanded and a time wall would be established to reflect all 25 indabas, to celebrate the 25th anniversary of the event. (Also watch attached Creamer Media video).

"We have an investor relations team working every day arranging meetings between investors and mining. Now we’re physically going to put them together, so we’re going to have a home in the event for the investors and mining company CEOs, with a big focus on juniors, but also on the corporate development teams from the bigger companies to all be with each other all day, every day,” Grose said.

International exhibition and conference organiser ITE last week announced that it had acquired the indaba from Euromoney for £30.1-million. ITE’s strategy is reportedly to own all of the world’s biggest ‘must-attend' events across industries.

President Nana Akufo-Addo of Ghana has already confirmed that he will speak at the 2019 Investing in African Mining Indaba, which will be held at the Cape Town International Convention Centre from February 4 to 7, and the event organisers are going all out to attract as many African heads of state as possible.

On South African President Cyril Ramaphosa giving the keynote address, Grose told Mining Weekly Online: “I’m happy to say that we’ve had a very strong indication from the Mr Ramaphosa’s office that he will be one of our speakers, as well as from two other African heads of state. It’s looking like a mini-UN, with multiple heads of state at the event.”

The indaba takes place in the week of the State-of-the-Nation address and at a time when South African mining’s contribution to gross domestic product is at a low 4% and has great scope to increase when compared with this country’s rich minerals endowment.

“Driving capital into African mining is what this event is all about,” said Grose, with the investment pavilion allowing junior mining companies to interface with world-class investors

“It’s all free to do and the juniors find the pitching quite exciting, and the investors quite like it as well,” Grose told Mining Weekly Online.

Every effort is being made to have a panel of high-ranking people from the Democratic Republic of Congo to discuss resource nationalist measures that are significantly more extreme than those being adopted in most other African countries.

On Mining 2050, Grose said: “We weren’t sure how it was going to go, but as it ended up, there was standing room only, so we’re doing another half a day of that.”

The Mining Indaba will be providing free access to 20 students, who will receive a week of tuition at the University of Cape Town on how to be a young leader in mining. A scholarship will also be conferred on a Master’s student.

“The numbers are looking great; everything is looking superb on the event so far,” said Grose, who is expecting a possible attendance level of 7 000.

“In general, we stopped the bleeding two years ago, and then last year saw a big increase, with many more mining companies, investors and government representatives,” he added.