Mine export values back but volumes need boosting – Minerals Council

Mine export values back but volumes need boosting – Minerals Council 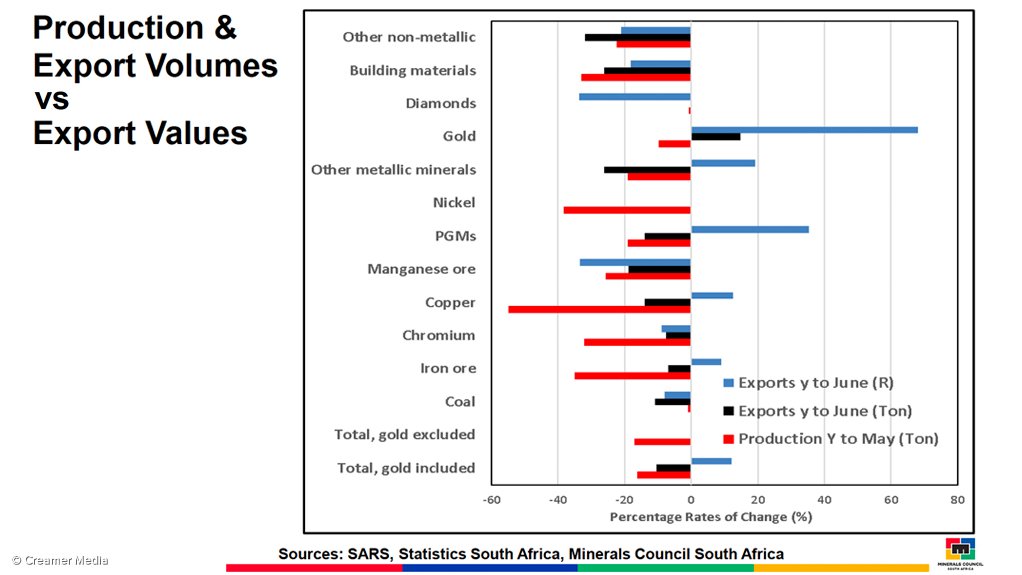 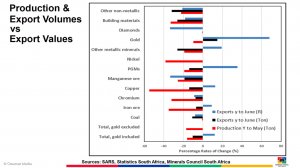 “Exports in value terms and earnings have bounced back, but we have to get the volumes up as well,” Minerals Council South Africa chief economist Henk Langenhoven told journalists during a 22-slide presentation on the state of mining.

June numbers were actually fantastic. In value terms, gold was more than 60% up on pre-lockdown 12-month averages; chrome was 31% better, platinum 26% better, manganese 18% better, copper 17% better and other metals 29% better.

Value was helped by the exchange rate, the weakening of the rand and the fact that South Africa gets more from whatever it exports.

Gold is at its high level because of uncertainties; coal is down because of lower demand; platinum group metals are well up on palladium and rhodium demand; and iron-ore is driven by the tailings tragedy and subsequent clamp down in South America.

“There’s been a turnaround, but the recovery to where we should be will be slow. Thursday will show how production is doing,” Langenhoven said in response to Mining Weekly.

Langenhoven expressed surprise that chrome-ore volumes had recovered so well, given the Lebombo congestion and the closing of the Port Elizabeth harbour.

He noted that it had been very difficult for the mining industry to respond quickly to higher commodity prices because of the logistical issues, work shifts, what happens with electricity in the smelt houses and the refineries.

In rand terms, the commodity price bounce back has been 14% to 15% better so far this year and first-quarter figures are not showing any drawdown on inventories.

May on April was a 14% bounce back on the very low number in April, but the first five months compared with the same period last year is still 16% lower.

But he cautioned that anything can go wrong in all the moving parts, which include:

Input costs were up 8% against commodity prices being 12% up and there is a slight improvement in the overall level of employment and a stabilisation since 2016.

Although South African Revenue Service (SARS) eight-dimensional export data for commodities has always been available, it has not been that simple to analyse and Minerals Council now has a tool at its disposal to slice and dice the SARS information, which arrived two weeks earlier than the production data, which is only due on Thursday.