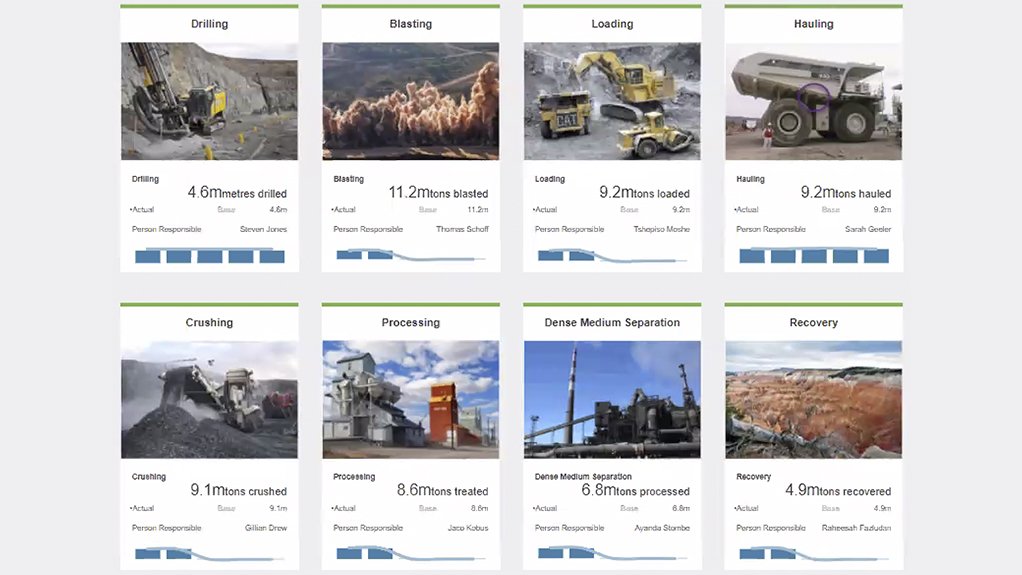 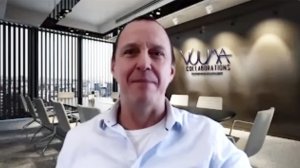 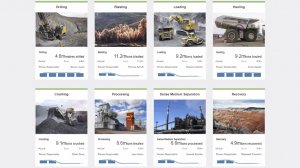 The operation’s earnings before interest, taxes, depreciation and amortisation (Ebitda) soared hugely from $634.3-million to $1.1-billion at a cost of an additional R150 000 a month. (Also watch attached Creamer Media video.)

This was revealed by Southern African Institute of Mining and Metallurgy (SAIMM) technical programme committee chairperson Gary Lane during an SAIMM webinar demonstration of a case study that highlighted the value destruction of ill-considered budget cuts caused by a general manager (GM) refusing to include four extra operators in the budget.

The VDT webinar, which provided a visual representation of all the variables and value drivers, was introduced by SAIMM president Vaughn Duke, SAIMM incoming junior VP Elias Matinde and SAIMM manager Sam Moolla, and succeeded in demonstrating how attention to the key value drivers has the power to increase operational performance.

In this case, cuts by the GM ended up with the operation having only 9.2-million tonnes of output instead of the required 15.4-million tonnes – a situation the VDT highlighted as needing only four extra operators to reverse.

In response to Mining Weekly during question time, Lane said: “I won’t tell you the mine, and I’m not going to tell you the GM’s name, but this is how ludicrous it was – we almost had $600-million of Ebitda extra by spending R150 000 a month more on four more people.”

Lane, who is also the director of the experiential simulation centre SiMINE at the Mandela Mining Precinct and mine-of-the-future firm Vuuma Collaborations, recalled how his VDT team had pointed out the hauling constraint in the system to the particular mine’s human resources (HR) department, which responded: “The miners never got their tonnes.”

But the biggest reason for the poor hauling performance was, “no operator available”.

The reality is that a mining system is complex.

"Murphy lives in the operation but to have a piece of equipment that costs R20-million and to have maintained it and to have a mine plan and then to have it standing because you need four more operators available is ludicrous.

“I can give you examples of big mining operations in this country that have had restructuring and in the restructuring process they have retrenched drivers. This is the core engine room of the operation and we’ve got to make sure we effectively understand one of the indicators that drive the performance," Lane told Mining Weekly.

The latest VDT technology now allows for the integration of work and management routines together with levels of work and source data to drive focused accountability for continual performance improvement.

During the stimulating presentation, Lane recalled how it was pointed out to HR that employing four more operators is where they could become involved. Equipment was available. There were no other delays but there were no operators.

“HR actually started laughing in this instance and said, you know, I actually asked the GM because that works out at 9 500 hours, which is only four operators per month over the year,” Lane recalled.

“You see straight away here that the wrong outcome was being driven. Unit costs and budget cutting were being debated but in actual fact value was being destroyed,” added Lane.

But the full attention of HR was soon secured, because it could see that VDT enabled it to do a business case for every one of its budget line items.

With four operators costing an extra R150 000 a month, calculations were done on the benefit of having enough operators, which significantly reduced operational delays and pushed up direct operating hours by 50%.

“You’re talking one focused metric here. We're not talking all the other ones,” Lane pointed out.

What the extra R150 000 a month did was increase tonnes and increased carats and lift earnings before Ebitda from $630-million to $1.1-billion on that one decision.

HR then brought another case where the finance department cut his training budget, which had forced it to find a cheaper service provider for training ­– and because of that, personnel spent extra time off site, which impacted operational delays still further.

Extra training caused a delay of almost 360 hours and the loss of 215 000 t of performance. Correcting those moved the operation much closer to overall target, with targets in certain parts being exceeded, resulting in so much more value being obtained. By focusing on these errant items, the operation was eventually put in the position to far exceed its original budget.

SWAMPED WITH DATA, STARVED OF INSIGHT

The sentiment was expressed during the VDT presentation that the Fourth Industrial Revolution is “driving even more data, probably creating even more noise, more confusion with regards to decision-making but we don’t even really use what we’ve currently got, which can add on a lot of value to an operation”.

On what would be the best headline to sum up the current situation of data generation, Lane said: “Something around 'swamped with data, starved of insight'. Focus attention on what really matters. Driving performance through focused attention. This is what we’re trying to achieve in the industry."

Mining Weekly: How many mining companies have adopted the VDT concept in integrated form?

Lane: There have been many value driver trees built on Excel, but not integrated, so they have generally been the world of the business improvement department as a tool. There is a zinc operation that we worked with recently. We worked with GE and we built a value driver tree from the top to the bottom of the operation. The value driver trees are being used as actual operational performance. I think it’s a big opportunity. It needs a mindset shift and this is really what I’m trying to push now with this case study to show everyone the opportunities of how we can now change the way we do performance management.

Mining Weekly: In one paragraph, why should mining companies use VDT?

In one sentence, it’s about creating focus that you are impacting your leading indicators that are impacting the performance of the operation. Fundamentally, you are trying to maximise the performance, you want to focus on the right areas and the right indicators because we are unfortunately chasing too many initiatives and too many things that are not actually generating value. I will give you a good example from something I did in Australia a few years ago. I presented to a whole bunch of PhDs and they were doing incredible work and the head of this institute asked me to come and do a presentation to try to explain to all these guys that it’s about the system. After I had explained about systems thinking and about value streams and finding where you are constrained in the system, a lot of the PhDs came back to me and said I now understand you. One said he was doing an incredible mill project. He improved mill throughput by 10% and automated process control but the client complained that he wasn’t adding any value. He said to me that he now understood it because the mill wasn't a constraint. You can do whatever you want to the mill but if it’s not the system constraint, you won’t generate a single extra ounce of material out of the system.

The case study on a VDT as a means of integrating value drivers across disciplines and activities produced by Lane and B Wylie of Cyest Corporation talks of mining companies traditionally being managed in silos, with each discipline owner or department head focusing on and managing key performance indicators (KPIs) very specific to their area of control.

For example, the individual responsible for the drilling and blasting activity, they state, focuses on KPIs relating to improving that activity, often without understanding the impact on downstream activities such as loading, hauling, and processing.

They add that the support functions of HR, finance, and engineering are functionality-focused, and often just see their role as administrative and having no direct control on production and therefore company performance.

The paper presents a case study of how a VDT model of the full mining company value chain was used in a structured workshop with mining, engineering, finance, and HR to show that every activity and functional area has value drivers that they control. These in turn impact other activities that have a direct impact on production and therefore overall company performance.

Some important insights were gained, where functional areas that saw themselves as purely administrative realised that they could make value-based decisions that directly impact company performance. For example, engineering focused exclusively on availability for all equipment, without an appreciation of reliability, utilisation and consequential downtime.

In summary, the authors of the case study, which is accessible online, state that they were able to demonstrate that:

Duke described Lane as having a passion for transforming the mining industry and said his 26 years of experience started with various engineering and project management roles with Anglo American.

“He believes in collaboration with thought leaders globally to bring together the technology skills and experience needed to drive a quantum change in the mining industry,” Duke added.

Points noted by Mining Weekly during the webinar included: