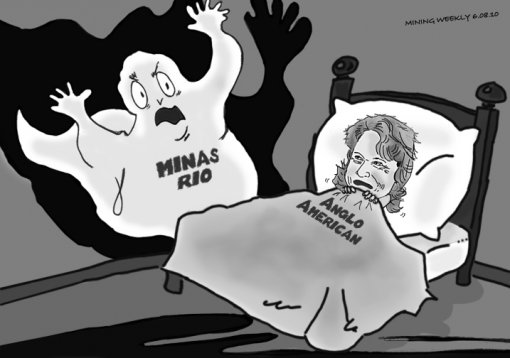 Mining investors continue to go through Anglo American's incipient Minas Rio iron-ore project, in Brazil, with a fine-tooth comb. The latest news is that the Minas Rio project will only be able to start by 2013, at the earliest. There is also talk of substantial potential cost overruns. The Minas Rio ghost, which seems intent on continuing to haunt Anglo CEO Cynthia Carroll for some time, is certainly attracting more negative attention than anything South Africa's Kumba/ArcelorMittal/Imperial Crown Trading mineral-rights debacle has been able to do so far. A number of key Minas Rio approvals remain outstanding, and Anglo makes it clear that Brazil's environmental permitting processes have become increasingly rigorous, forcing ongoing high-level dialogue with the Brazilian authorities. Anglo paid $5,5-billion in 2008 to acquire full control of Minas Rio from Brazilian billionaire Eike Batista.