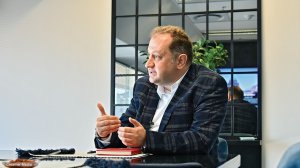 JOHANNESBURG (miningweekly.com) – Initial project activities are under way at the R250-million cash-funded East Manganese project in Hotazel, Northern Cape, where the hot sun will be harvested to provide solar power to the mine’s infrastructure.

The development forms part of the company’s strategy of building a manganese portfolio in the Northern Cape and diversifying the company’s portfolio, particularly in bulk minerals.

East Manganese is located in the manganese-rich Kalahari basin, which hosts 80% of the world's manganese orebodies.

Menar likes the macro supply-and-demand fundamentals of manganese and is confident that it can leverage the group’s existing skills and relationships in South Africa to build a strong manganese business.

“Obviously, we’re taking all the precautions to ensure that our employees keep safe but we’ve carried on working and one of the things that we’ve pushed through during this lockdown is establishing East Manganese,” he said.

The opening development of the boxcut is scheduled to begin in the second week of August, when delivery of mining equipment will also commence.

East Manganese will be an opencast mine with a single mining pit, located on a small 50 ha portion of the total 1 000 ha mining right area. The remaining unused portion of the mining area will be used for cattle and game farming by the farmer.

Owing to the conical shape of the proposed pit, it will take six to seven months to reach first ore, after which steady state production and processing of 30 000 t/m will be achieved swiftly. Physical mining activities will commence once all operators have been certified, both operationally and medically.

Menar began upgrading the existing access road linking the mine to the main road in early July and this will allow the haulage of ore to the nearby Transnet Freight Rail line that is dedicated to manganese transport. The manganese will then be railed to Port Elizabeth harbour for export. Transnet has increased its ability to rail manganese destined for the export market, which is encouraging for investors.

The fleet on order consists of three production teams, each made up of one 75 t excavator and three 40 t articulated dump trucks. In addition, two suitably specified dozers, one grader, three front-end loaders and a water bowser to manage dust emissions have been procured.

“It’s a small deposit with a three-year life-of-mine. For us it's a learning curve and we're already looking at different projects in the manganese sector to increase our life-of-mine,” Bayoğlu explained.

Menar has acquired the land portion on which the proposed pit will be located. The reserve consists of a total of 870 000 t of run-of-mine ore.

Consultations have taken place with the local municipality and other community stakeholders regarding the social and labour plan and to ensure that the mining activities can be beneficial to local residents.

A dry crushing and screening plant will be operated on site which will reduce water requirements and limit pressure on local water sources.

“We’ll have a crushing and screening plant on the property and we’ll get about 85% lumpy product and 15% fine materials. We’re in the process of developing the mine and were dealing with all the aspects.

“We’ve started recruiting the people. It’ll employ about 80 people in the beginning. That’s going to be the direct employment and I think with indirect employment, it will reach about 120 people, which will mean that if you look at the overall effect of this mine in the area it’s going to be about 1 200 people, and it’s important for us to show that we are committed to South Africa by continuing to develop mines in the middle of the pandemic. We believe that life carries on. We have to carry on creating jobs. It’s important to have job security in that area as well,” said Bayoğlu.

In addition to being an ingredient to improve the properties of steel, manganese is a battery mineral and important in aluminium alloys, copper alloys and a variety of chemicals. Batteries making use of manganese include energy storage batteries as well as electric vehicle batteries.

“It’s a critical mineral and South Africa is in a good position to benefit from having manganese in the country.

Menar will be investing own funds of about R250-million in total in the next 12 months: “For these kinds of projects, we generally use our own cash,” said Bayoğlu. This is because project finance to start a mine is not easy to get from any financial institution because of the risks involved.

“But we believe in the project. We did our feasibility study. We know it's a shallow deposit. We know the ore qualities. We’ll have a 37% manganese product. We know how we’ll take it to the port. We’ve made our applications regarding Transnet and we’re talking to an offtaker. So, we see that this business is going to make money, hence we risk our own cash,” he said.

On taking advantage of the region’s hot sun to self-generate electricity, he said: “We’ll be using solar energy to power our offices and our weighbridge. All of our infrastructure will be powered by solar energy.”

The manganese market is a volatile market. A month ago the price of manganese was $5 per dry metric tonne unit (dmtu) and now its $3/dmtu.

“It goes up and down. This volatility is more about mainly one customer, which is China, getting most of the product from South Africa or Australia or Gabon. That plays a part, but also, when they see a lot of product in the market, then they obviously try to get better prices, and when they don’t see the product on the ground, then it’s a different story.

“During lockdown, South Africa’s opencast manganese mines carried on and the underground mines returned when the lockdown rules were eased. So, there’s no production issue, there’s no stock issue. Hence the prices didn't really go up,” he said.

This was Bayoğlu’s comment on manganese marketing taking its cue from its better-performing associate, iron-ore:“If you look at iron-ore, it’s slightly different because China needed to keep their steel plants operating to keep the jobs safe. People are between a rock and a hard place. Are they going to lose their jobs, or are they going to lose their health, what is the balance?

“They found out that they had to carry on working, but then obviously take all the precautions to keep everyone safe. I think that’s what happened in China.

“Because of that, they carried on buying iron-ore and they kept the prices up, but on the manganese side, manganese is an ingredient in steel, it’s not the main mineral. It’s like your nickel or your chrome, and it all depends on what China is going to produce in terms of stainless steel or a certain type of steel with a different property. Hence manganese is not like iron-ore, but I’m thinking that iron-ore might also have issues at some stage, depending on the movement of rebar steel in China.

“We accept that the manganese price is volatile and we said look we have to start at some point. You can’t start when there’s a peak because you don’t know where the peak is. As long as our cost is right, as long as we operate in a lean manner and our costs are under control, that’s alI I can do. If my cost is low, even if the manganese price is low, we will still benefit and still be profitable,” Bayoğlu explained.

Most of South Africa’s manganese mining businesses are doing quite well, especially the majors, because their infrastructure is paid for and their initial investments are long covered.

“In any mining operation, if the management doesn't do the right thing, then they will end up having a problem. It’s not specific to manganese. It could be a chrome mine or a platinum group metals mine.

“I guess, we just have one struggling mine at the moment and I’m hoping that they can fix it as quickly as possible because it’s a good asset, a lot of money was spent on it, and I hope that they can manage it right so that can get out of their financial struggle,” he said.

What other opportunities are there in the manganese fields of South Africa?

“Obviously underground mines are more costly and some of the opencast mines after a period of time will also go underground. So, my thinking is that future manganese mining in South Africa is going to be more expensive.

“First of all, it’s going to be underground versus opencast and it will not be that easy to carry on putting more and more investment to develop more mines. Hence, I’m thinking that the miners who know what they are doing and who mine in a cost-effective manner, will do better than the others.

“There are projects on the market available, but the appetite to put the capital in those investments is not there yet because they are mostly underground, and they are not like your 44%- and 45%-manganese underground mines, they’re mostly 36%- and 37%-manganese mines.

So, if a deposit is 37% and it’s underground, you have to be very careful before you sink a shaft, so that you don’t make a mistake and your return on investment is a very long period of time.

“My thinking is that if careful investors look at the opportunities in South African manganese mining, I think there are opportunities, but I can't say that there are a lot of them, and if there were, that would affect the manganese price, because if someone carries on producing more and more, then the price is going to drop,” Bayoğlu commented.

Menar purchased East Manganese from Southern Ambition in September 2018 and was granted environmental authorisation in February 2019 and the mining right in August 2019.