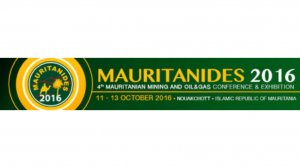 
The fourth edition of the Mauritanian Mining & Petroleum Conference & Exhibition (MAURITANIDES 2016) will take place from 11 – 13 October 2016, in Nouakchott, Islamic Republic of Mauritania. MAURITANIDES is already a fixture in the worldwide mining and petroleum trade event calendar with over two hundred companies from over twenty countries represented at the last edition. This biennial event is organised by the Ministry of Petroleum, Energy & Mining, Mauritania in partnership with AME Trade Ltd. The event supported at the highest level is held under the High Patronage of His Excellency Mohamed Ould Abdel Aziz, President of the Islamic Republic of Mauritania

Despite the vacillating prices of global mined commodities and petroleum, which has produced many challenges for countries dependent on extractive industry resource revenues such as Mauritania. There has been some very encouraging recent developments in the country, which will be highlighted during the event by our principal sponsors Kosmos Energy and SNIM.

Andrew G. Inglis, Chief Executive Officer, Kosmos Energy will outline their plans to explore and develop a World-Scale Hydrocarbon Resource offshore  Mauritania and Senegal. There is certainly potential for Mauritania to become an exporter of LNG in the very near future.

SNIM, Mauritania’s parastatal iron ore company is planning to place Mauritania into the top five worldwide exporters of iron ore by 2025 with an annual production of 40 million tonnes. Despite the falling iron ore prices, their Administrator and Director General, Mohamed Salem Ould Bechir will present their strategy to reduce costs, keep production levels up and improve the competitiveness of their workforce. SNIM’s second iron ore enrichment plant at its Guelbs Mine (inaugurated November 2015) will add around 4 million tonnes of ore concentrate to its annual production.

At the same time Kinross-Tasiast; a platinum sponsor of MAURITANIDES with their Tasiast gold mine recently hailed as one of the top five gold producing mines in the world. Senior representatives from the company will be presenting at MAURITANIDES to outline their long term vision for the mines expansion which includes a $300 million investment to increase mill-throughput capacity by 50% to 12,000 tonnes per day (t/d).

Other sponsors of MAURITANIDES include:

The Canadian Institute of Mines, Metallurgy & Petroleum will also be organising a panel on "Corporate Social Responsibility (CSR): a prosperity factor and risk management tool for the mining and petroleum industry". The panel will be comprised of private companies and government officials for a balanced debate.

The opening ceremony of MAURITANIDES will take place on 11th October 2016, followed by two days of conference sessions and a three day trade event.