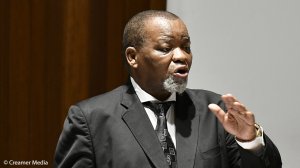 Despite South Africa’s significant coal resources, there are “binding constraints” impacting on the future growth of the coal industry – an issue Mineral Resources and Energy Minister Gwede Mantashe says is the coal mining industry’s issue to solve.

Speaking at the Coal Colloquium, held at the Council for Geoscience in Pretoria on February 1, he rallied coal producers to band together in tackling constraints within the coal value chain; which, if left unattended, “will result in the stagnation and ultimately the shrinking of the coal industry”.

“It is no secret that the coal mining industry is faced with serious challenges arising mainly from the downstream side in the use of coal, which is energy generation,” said Mantashe.

He stated that, domestically, coal would continue to play a role in developing an economic energy mix, as well as sustaining steel and cement industries. “But, its use will eventually decline as nations and businesses strive to reduce their environmental impact and abide by climate policies.”

As such, to ensure South Africa did not phase out coal, Mantashe said the coal sector must map out, clearly, an engagement strategy in the national interest, which will enable it to “speak with many voices, but one message”.

Further, he said global ambitions to phase out coal should not be applicable to South Africa because “global energy transition discourse is determined solely by what works in the advanced economies” – a case often playing out at conferences such as COP26.

At such events, Mantashe said, advanced economies asserted their own trajectory on the energy transition, often seemingly failing to recognise developing economies’ predicaments.

That said, he urged that South African coal mining companies should naturally be concerned about the downstream use of coal and how they can find technologies and innovations to help move from high carbon emissions to lower levels as part of a just energy transition.

Mantashe noted that the South African government ratified the Paris Agreement, which entered into force on November 4, 2016 – a signal then, that the government was committed to addressing the challenge of climate change.

In this regard, he alluded that it was difficult to meet Paris Agreement obligations because South Africa’s coal sector contributes about 80% of the country’s total greenhouse gas (GHG) emissions, with 50% of such emissions stemming from electricity generation and liquid fuel production.

“While, as a country, we are committed to combatting climate change as a consequence of burning coal in power stations, we have three major factors to consider pertinent to our national realities,” explained Mantashe.

Firstly, he said, South Africa is highly endowed with coal and, secondly, it is highly dependent on coal for its baseload electricity generation.

“Thirdly, the coal mining and energy generation industries not only bring massive revenue but also employ thousands of employees. The critical question then becomes how can we respond to these national realities? This is what the energy transition discourse and programme must engage with,” stated Mantashe.

All things considered, he said that, as a significant component in South Africa’s economy and considering the value of the commodity, the South African government “intends to introduce interventions that will not sterilise the development of its coal resources”.

Instead, Mantashe said any new coal-fired power projects “would be based on high-efficiency, low-emission technologies and other cleaner coal technologies”, coupled with underground coal gasification, fluidised bed combustion and the development of carbon capture and storage.