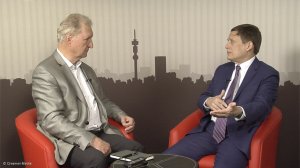 JOHANNESBURG (miningweekly.com) – Hydrogen energy has been like science fiction since the post-World War II period. Many have dreamed about being able to replace oil and natural gas with hydrogen, but limiting factors have been been the cost of production and safety issues.

Now, widespread sun and wind power use as well as liquid organic hydrogen carrier (LOHC) advances are sweeping these issues aside to make hydrogen's $1/litre, or $4/gallon, cost competitive with petrol.

“Research has continued quietly, we’ve jumped through some hoops and now, all of a sudden, the hydrogen economy looks like it could happen,” CPM MD Jeffrey Christian told Mining Weekly Online this week. (Also watch attached Creamer Media video).

The implications of hydrogen replacing oil are economically and politically far-reaching. The world, which once used whale oil, wood and peat, then shifted to coal, petroleum and natural gas.

“It would be one of those major economic transformations to go from petroleum and natural gas to hydrogen,” Christian commented in an interview in Johannesburg, where he reported that major global energy companies are viewing hydrogen as an upcoming universal energy source.

This is coinciding with tremendous renewable energy growth the availability of significant off-peak power generation capacity plus a momentous demand for a phasing out of the high-carbon environment that is endangering the future of the planet.

At the point of use, hydrogen is able to provide clean electricity and can be stored for as long as one likes – a day, a week, a month, a year or ten years.

The oil-like character that LOHC technology provides allows hydrogen to be transported, stored and dispensed conventionally. A cubic metre of LOHC can convey some 57 kg of hydrogen. Currently used fossil fuel road tankers, rail tankers or ships can be used to render hydrogen tradable on a global scale.

“In my eyes, hydrogen’s most important contribution to a future energy system will be that it makes renewable energy transportable and tradable on a global scale,” said Germany-based Hydrogenious Technologies LOHC founder and CEO Dr Daniel Teichmann in response to questions put to him by Mining Weekly Online.

"But there is still a lot of work to be done. We need the political will to make the hydrogen economy a success story. We need government funding for research and development and for industrial-scale projects that demonstrate the technical as well as commercial feasibility of hydrogen use. In addition, the industry worldwide has to contribute its fair share and make an even stronger commitment to hydrogen," Teichmann stated in his written response.

‘Green’ hydrogen is produced by splitting water into hydrogen and oxygen in electrolysers.

To produce hydrogen, it is envisaged that renewable power will be used to desalinate seawater at the coast or brackish water and acid mine drainage inland, and then to electrolyse the desalinated water. Some 50 kWh of electricity will be required to electrolyse 1 kg of hydrogen.

Ross stated that South Africa’s combined solar and wind power provide a hydrogen production capacity factor of almost 100% during daylight hours; during the night, wind will enable electrolysers to produce hydrogen at a capacity factor of about 30%, which is higher than the international norm of about 22%.

Isondo Precious Metals CEO Vinay Somera, whose company is planning to manufacture membrane electrode assembly (MEA) for fuel cells at the OR Tambo International special economic zone, has advocated that South Africa’s sunlight, wind, platinum and base metals be combined within a value chain to boost the South African economy.

South African company Hydrox Holdings, which has patented a water electrolysis method that is membrane-free technology, is targeting hydrogen production at a cost of below $7.5/kg

Hydrox CEO Corrie de Jager has reported that Hydrox’s divergent electrode flow through electrolyser can operate at temperatures greater than conventional systems owing to the absence of a temperature-limiting membrane.

Hydrogen South Africa Infrastructure (HySA Infrastructure) director Dr Dmitri Bessarabov has pointed out that hydrogen and fuel cell technologies are presenting major beneficiation opportunities for South Africa’s platinum group metals (PGMs) sector, as PGMs are required not only as catalysts in fuel cells but also in electrolysers that produce hydrogen, for which there is export demand. HySA Infrastructure has been successfully operating a solar-to-hydrogen system since 2013.

When President Cyril Ramaphosa went to Japan in 2015 as Deputy President, he drove a hydrogen-using Toyota Mirai fuel cell electric vehicle. At the time, Ramaphosa and the then Science and Technology Minister and now International Relations Minister Naledi Pandor were attending the Japan South Africa hydrogen and fuel cell symposium. Later, while launching a fuel cell forklift and hydrogen refuelling station at the Impala Platinum refinery in Springs, Pandor noted the need for South Africa to address the issue of hydrogen distribution from highly dispersed sources.

The cover picture of the December 16, 2011, Mining Weekly showed the former South African President, Kgalema Motlanthe, admiring a platinum-catalysed Anglo American fuel cell, which was on display at the United Nations Climate Change Convention’s seventeenth Conference of the Parties, in Durban, and former Anglo CEO Cynthia Carroll saying that the window of opportunity was “wide open” for South Africa to create “hundreds of thousands of new jobs” and simultaneously obtain a source of clean zero-emission electricity through investment in manufacturing, insulation and maintenance activities.