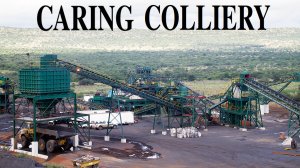 JOHANNESBURG (miningweekly.com) – The Zululand region of KwaZulu-Natal was afflicted by what the Department of Water and Sanitation described as the “worst drought in a century” in 2016 and is still one of the water-scarce areas of the country.

Helping neighbouring communities survive this disaster, investment company Menar Holdings’ Zululand Anthracite Colliery (ZAC), near the town of Ulundi, supplied, and continues to supply, them with more than 42-million litres of clean, potable water a year from its water purification plant. The mine is, thus, providing locals and their cattle with much-needed drinking water.

ZAC has, over several years, built a series of pipes, boreholes and taps to supply the communities with water, with the furthest tap being located about 17 km from the plant. The mine uses about 16-million litres of water a month, but is making “great efforts” through its water stewardship to reuse water within its operations using a closed-circuit water reticulation system, while carefully monitoring the amount of water it extracts from surrounding freshwater sources such as the Umfolozi river. The company is also pumping water from its shafts for reuse in ZAC’s mining and processing operations.

In addition to its water relief efforts, Rothmann highlights that ZAC is also involved in several community and social projects, with the primary focus on local economic development, education, enterprise development and corporate social investment initiatives for the four nearby local communities of Mandlakazi, Matheni, Mlaba and Zungu.

Rothmann points out that the company has provided about R7-milion in financial assistance for infrastructure projects, including the Falethu skills centre, the Dalisu laundry, the Vukuzame community garden and the Sidlangaye hydroponics project, as well as the Mandlakazi and Celukufuna concrete-block-making projects.

He says, as a result of the company’s interventions, there have been nine local cooperatives registered since 2011, which have 194 members in total and have created a number of jobs in an area with very high unemployment rates. The mine has also employed about 800 people directly and about 550 contractors, predominantly from the surrounding communities.

OPERATIONAL REVIEW
ZAC’s 13.4-million-ton coal reserve comprises 3.3-million tons in proven reserves and 10.1-million in probable reserves. The mine also has 17.1-million tons of inferred resources and has a life-of-mine (LoM) up to 2027. But, Rothmann points out, there are undeveloped known resources still to be considered in future, with further exploration potential on ZAC’s mining tenement and areas adjacent to the mine.

Producing coal at all-in sustaining costs of R1 500/t, ZAC intends to reduce this to about R1 200/t over the next few months by improving overall operational efficiencies, while increasing outputs.

Rothmann comments that ZAC has had several owners since its establishment in 1985, prior to Menar taking ownership of the mine in September 2016, including mining companies BHP Billiton, Riversdale Mining and Rio Tinto.

ZAC uses a combination of Joy Global 14HM15 and Voest-Alpine AM CMs in its operations. The CMs can be employed at all shafts down to seam heights of about 1.2 m. Average production from the CMs is 22 000 t/m of coal, with ZAC using in-house mining teams.

He highlights that the machines offer higher productivity and can carry out secondary extraction, but they are less flexible, take considerable time to be relocated to another mining area and are costly and highly dependent on support equipment.

Additionally, Rothmann notes that ZAC has been using D&B mining methods for the past 30 years and can mine seam heights as low as 0.85 m. He points out that average production using D&B is 7 200 t/m of RoM coal.

“The advantages of using D&B are consistency, flexibility and ultralow-seam mining, while the disadvantage of employing this mining method is that it only provides for medium levels of productivity,” he states.

ZAC has three shafts – Ngwabe, Deep E and Outcrop – in operation. Ngwabe consists of three CM sections, with the third one having been commissioned at the end of April. Deep E has a single CM section, while Outcrop comprises one D&B section.

Ngwabe, which has been operational since 2011, is a “key driver” of LoM production at ZAC. The shaft has 5.2-million tons of reserves remaining, which will be depleted by 2025. Rothmann says the about 380-m-deep shaft has seam thicknesses of between 1.6 m and 2.5 m.

Outcrop, which has been operational since 2007, has reserves of 2.6-million tons remaining, which will be depleted by 2027. However, Rothman remarks that there is a further 1.9-million tons of exploration potential coal available, should the company decide to extend the shaft’s life span. The shaft is about 240 m deep, with seam thicknesses of between 1 m and 1.2 m.

DEVELOPMENT PROJECTS
Several other shafts are also under consideration, Rothmann tells Mining Weekly. These include Block D, a decline shaft adjacent to Ngwabe that is scheduled to be opened in 2018; Mgeni, a new decline shaft that the company aims to open in 2021; Qongqo, which has reserves that are not yet scheduled in the LoM plan; and Maye B, an existing shaft that needs further exploration work before it can be brought into operation.

He says ZAC also plans to open a new anthracite mine about 100 km from its current operations. “We are conducting a feasibility study on the project and are aiming to bring the new mine into production in 2018.” Menar Holdings expects to release more information on this development “in due course”.

PROCESSING AND PRODUCTION
The mine commissioned a new R55-million dual dense-media separation (DMS) plant last month to process materials from its discard dump. The plant, which produces middling product, was built and is operated by local mineral processing company Ingwenya and can process 100 t/h of coal, which translates into 600 000 t/y of coal.

About 70% of the mine’s product is supplied to the local market and 30% is exported, primarily to Brazil for steelmaking and Spain for domestic heating purposes. However, ZAC has also received enquiries about supplying Vietnam and Ukraine.

LUCKY IN LOGISTICS
Rothmann enthuses that ZAC is “fortunate” to be located near key logistical infrastructure, which supports the transportation of products to local and international customers.

“The siding is also well positioned to load empty trucks heading back from the port for a return load to the inland market,” Rothmann concludes.