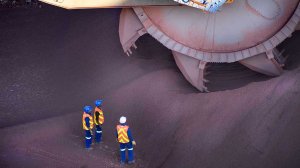 Miners inspect a bucket wheel excavator at Kumba's Kolomela mine

For the fourth quarter of 2021, the miner produced 9.7-million tonnes.

Production at the Sishen mine decreased to 6.5-million tonnes for the quarter, compared with 6.6-million tonnes produced in the fourth quarter of 2020.

Sales for the fourth quarter were 3% higher year-on-year at 10.7-million tonnes – all of which went to the export market.

For comparison, Kumba’s reported headline earnings and HEPS for 2020 were R22.79-billion and R71.07, respectively.

For comparison, Kumba’s reported basic earnings and EPS for 2020 were R22.77-billion and R71.03, respectively.

The increase in earnings in 2021 is largely attributable to the higher average realised free-on-board export ore price, partly offset by a stronger rand:dollar exchange rate, relative to 2020.

In addition, she says the company’s strong safety performance in 2021 means it has achieved more than five years of fatality-free production.

“Our focus on product quality and development of markets beyond China contributed to an average realised price of $161 per wet metric tonne (wmt), 18% above the benchmark price of $136/wmt,” says Zikalala.

While market uncertainty may persist, she says Kumba’s premium-quality products and value-focused strategy ensure the company is playing its role in the global steel industry’s transition to a cleaner and more sustainable future.

Meanwhile, more than 75% of Kumba’s workforce is fully vaccinated against Covid-19, while a booster programme is currently being rolled out to further protect its workforce against the pandemic.

As a result, Kumba continues to see reduced operational disruption.

Further, Kumba continues to actively encourage those who have not yet been vaccinated to take the earliest opportunity to do so and protect themselves and those around them.