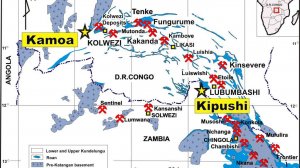 TORONTO (miningweekly.com) – Following the successful – despite lengthy and problem-beset – process to dewater the Kipushi high-grade copper/zinc project, in the Democratic Republic of Congo (DRC), Africa-focused project promoter Ivanhoe Mines on Monday announced that underground drills had started turning on a campaign to confirm and expand the old mine’s historic resources.

The company had embarked on a 20 000 m diamond-drilling programme at the copper/zinc/germanium/lead/precious-metals mine on the Central African Copperbelt, in southern Katanga province, less than a kilometre from the Zambian border, a critical step in its goal of restarting production from the mine that closed in 1993.

"This is a major advance toward our goal of returning Kipushi, formerly one of the world's highest-grade copper and zinc mines, to full production. Our first rig began drilling from a strategically sited pad 1 225 m below the surface last Saturday. We expect that two additional rigs now en route to Kipushi also will join the drilling later this month,” Ivanhoe executive chairperson Robert Friedland said.

Among the programme's objectives is to conduct confirmatory drilling to validate the historical resources within Kipushi's Big Zinc and Fault zones and qualify them as current resources in conformance with standards established by the Canadian Institute of Mining, Metallurgy and Petroleum (CIM).

The Big Zinc, an extremely high-grade zinc deposit, adjacent to the Fault zone, was discovered shortly before the mine ceased production in 1993 and has never been mined. From its top at about the 1 200 m level, the Big Zinc deposit extends downward to at least the 1 640 m level.

Ivanhoe's planned 2014 drilling programme is also designed to conduct extension drilling to test and upgrade the deeper portions of the Big Zinc and Fault zones, below the 1 500 m level, that previously were classified as inferred resources; to conduct exploration drilling to test areas that have not been previously evaluated, such as the deeper portions of the Fault zone and extensions to the high-grade copper mineralisation of the mine's northern deposit; and to obtain large-diameter drill core from the Big Zinc for confirmatory metallurgy testwork.

Most of the underground infrastructure is already in place to support the drilling programme. The majority of the drilling will be conducted from sites on the hanging-wall development drift at the 1 270 m level and from the footwall ramp below the 1 150 m level.

A 280 m step-back extension of the drift will also be driven to allow the drill crews to test the down-dip extensions of the Big Zinc and Fault zones.

Independent consultant South Africa’s MSA Group has been appointed to prepare a current estimate of the Big Zinc resources to CIM standards, following completion of the confirmation drilling programme.

Ivanhoe Mines, formerly known as Ivanplats, also owns the high-grade Kamoa copper deposit in the DRC, as well as the Platreef polymetals project, in South Africa.