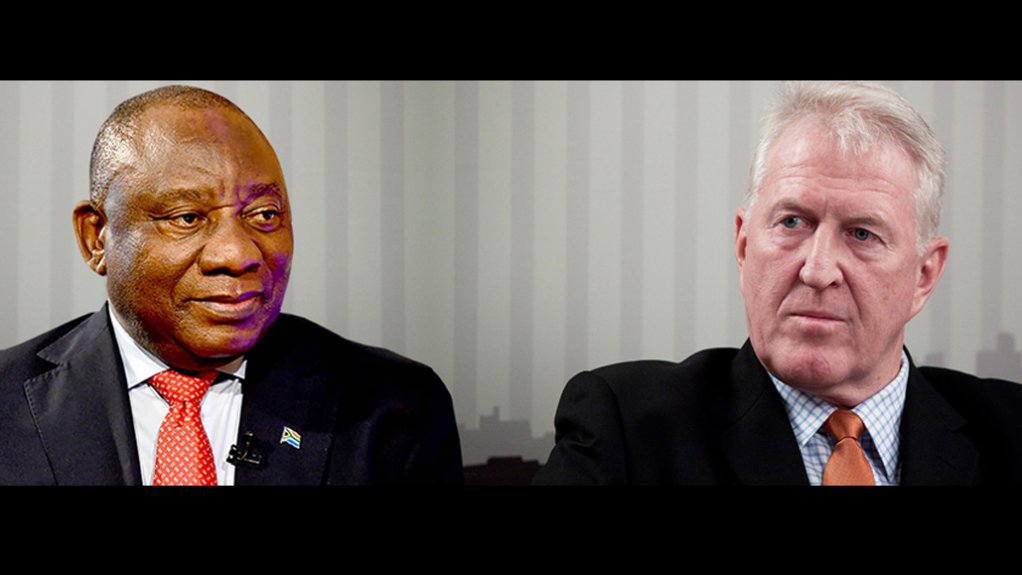 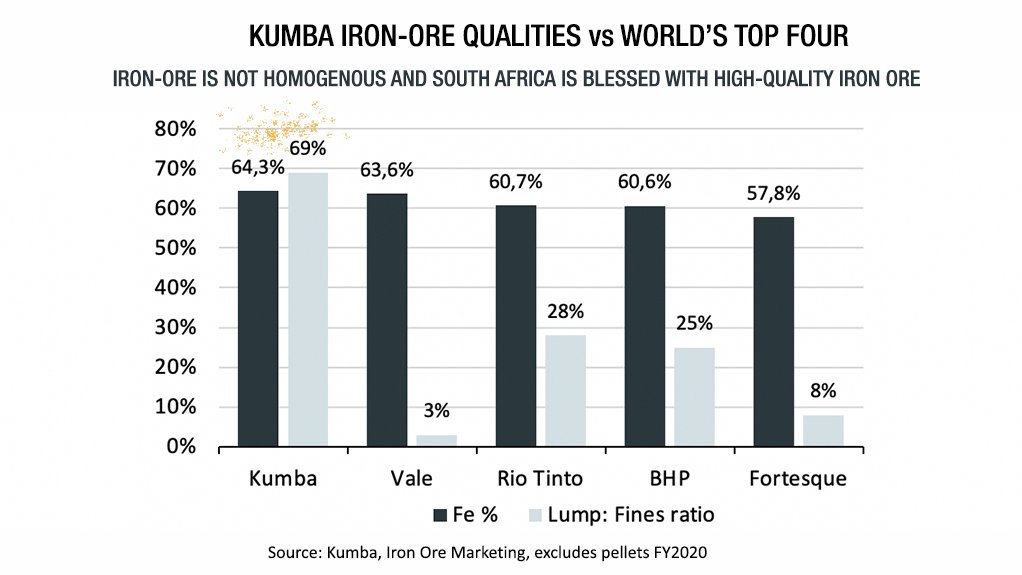 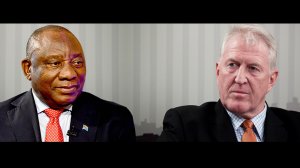 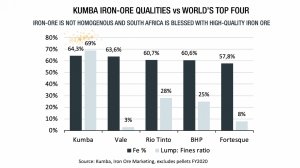 Photo by Creamer Media
In a ‘Postcard’ to President Cyril Ramaphosa, mining analyst Bruce Williamson (right) pleads for the creation of ‘all-weather’ mining policy.
‘Fairy dust’ has rightly been sprinkled over Kumba’s iron-ore versus the ore of the Top 4.

JOHANNESBURG (miningweekly.com) – If you bought R100 000 worth of shares in Kumba Iron Ore at the start of 2016, you would now be sitting on shares worth a staggering R2.67-million, excluding dividends.

This is because Kumba’s all-time low share price of R25.35 in January 2016 has skyrocketed 2 647% to R696.45, reflecting the unfolding of one of the world’s most stunning commodity bull markets in the iron-ore sector.

The global iron-ore market has literally gone from the depths of despair at the end of 2015 to the acme of euphoria now – and therein lies a huge reason why mining policy in South Africa must be formulated to deal with the hugely valuable highs but devastating lows that are a feature of the cyclical nature of the mining business.

In it, he emphasises that South Africa is blessed with the highest of iron-ore quality that earns premiums left, right and centre (see attached graphic). South Africa’s iron-ore is fetching closer to $255/t than the $220/t the rest of the world is raving about currently, which is why Williamson makes a special plea for State rail authority Transnet to go all out to ensure that it rails more iron-ore to the port than it has ever done in its history, for the likes of Kumba, Assmang and Afrimat.

Williamson also pleads forcefully for a derisking of the industry – in the good times like now – through the creation of ‘all weather’ mining policy, so that more companies can survive the downturns and be around to benefit from the commodity boom times. Policy is needed to ensure that the mining sector is able to operate within a coherent, investor-friendly and perpetual legislative framework for the good of the South African people into the long term.

In his ‘Postcard to the President’, Williamson puts it thus:

“Mr President, whilst you and your Cabinet are grappling with Covid-related business closures and job losses, you may have missed one of the greatest commodity bull markets unfolding in the iron-ore sector. I highlight this because mining is the ultimate economic ‘multiplier’ in terms of creating growth and employment. In addition, the iron-ore and platinum group metals (PGMs) miners are bringing in huge amounts of dollars and paying record-level taxes that you could not have imagined possible. However, miners have to deal with massive highs and lows, which makes appropriate policy all the more important.

“Mr President, witness Kumba’s rise from the dead in 2015, and understand the magic of the mining multiplier and why mining policy needs to prevail for decades.

“Kumba’s earnings crashed due to the collapse in the iron-ore price, which bottomed at $38.50/t in December 2015. In turn, the iron-ore price fell due to strong growth in supply and slower crude steel production growth in China. Kumba achieved a realisable price of $53/t due to much lower lump premiums. Unit cash costs were cut by 26% to $54/t and Kumba was ultimately saved by a 15,1% fall in the rand which averaged R12.84/$ in 2015.

“Management described the period as ‘turbulent and challenging in a rapidly changing market where economic fundamentals resulted in the price of iron-ore falling faster and deeper than expected'. These circumstances reinforced the need to make tough decisions for the business and to take necessary action to safeguard the viability of the operations.”

“When parent company Anglo American (77% shareholder in Kumba) announced its December 2015 final results, under huge balance sheet pressure, CEO Mark Cutifani was reported as saying that ‘the company will be directing its focus to its diamonds, platinum and copper assets, which are performing well'. Cutifani added, ‘I think we’ve drawn the line, there are some good assets for sale that will help us reset the balance sheet and create a very different group for the future’. This included the intention to sell off its majority stake in Kumba ‘with the target of trimming its net debt to around R10-billion by the end of the year’.

“From an all-time high of R611 a share in February 2013, the Kumba share price fell almost 96% to R25 in January 2016 - valuing the company at a mere R8.1-billion. To think that parent company Anglo American, partly driven by its debt woes, contemplated selling its majority stake in Kumba does not just defy belief, but gives you an insight into what the bottom of a commodity cycle looks like. Mr President, suicidal comes to mind.

“That China was the first major economy to recover from the Covid lockdowns was important for global iron-ore producers as China accounts for over 50% of global crude steel production and almost 70% of seaborne iron-ore demand. The strong Chinese demand for iron-ore has been supported by a global recovery in auto and manufacturing in the US, Japan and parts of Europe and Asia.

“The supply-side dynamics have also added to a tight market. Post the 2015 downturn, miners realised the folly of bowing to analyst and fund manager calls for growth. Instead, many focused on restoring their balance sheets, modernising their existing infrastructure and enhancing productivity. This time around there is limited excess capacity, also curtailed by the tragic Samarco and Brumadinho tailings dam collapses. A combination of a global recovery in China and developed markets, weather and operational problems experienced by producers, tight seaborne cargoes and ‘hefty’ steel mill margins has pushed iron-ore prices to new highs.

“There are three main iron-ore fines CFR China prices quoted daily: Fe 58% ($181.70/t); Fe 62% ($229.60/t) and Fe 65% (263.10/t) of which the Fe 62% is the benchmark. But there is considerably more to it than meets the eye. Iron-ore deposits around the world differ in content and form, either fines or lumpy. For instance, while the 62% benchmark iron-ore price is at a record $229/t, iron-ore produced in South Africa’s Northern Cape by companies such as Kumba Iron Ore and Assmang and now also Afrimat, is generally even better priced in that our 64.5% iron-ore content is fetching closer to $255/t.

“In addition, close to 70% of our local iron-ore is lumpy which currently earns a premium ($0.58/dmtu) of around $37/t. This adds almost 15% to the already higher Fe 64.5% price, a notch higher in that lumpy ore can be fed directly into furnaces, whereas fine ore has to be agglomerated in a sintering plant to produce pellets. You can't just put fines into a blast furnace, so local producers earn a lump premium for about 70% of their product. The point, Mr President, is that we need an ‘all-weather’ mining policy so that more companies can survive the downturns and be around to benefit from the commodity boom times.

“There is more to consider, Mr President, with better and more efficient rail infrastructure South Africa could export much more down the Saldanha line and enjoy the benefit of both added value and volume. If South Arica could get another 10% to 15% down the line, it would yield massive extra dollar revenues for the companies and significant additional taxes for the South African Revenue Service. The grade and lump quality of Kumba’s ore compared with the Top 4 global iron-ore producers is highlighted by the figures in the attached graphic. We need a mining policy that cares for such orebodies and companies, that ensures that our existing mines prevail and that we develop new mines.

“Mr President, a great mining policy has a good chance of attracting great mining companies to the stock market. Again to reiterate how far the magic of the mining multiplier stretches, the performance of the JSE over the past year has been dominated by mining stocks, in particular, iron-ore and PGMs. Admittedly, patience and timing is a virtue, but note that since the listing of Kumba in November 2006, the share price has compounded at 13.1% a year, whereas the total return (dividends reinvested) has compounded at nearly 22% a year. Since the all-time low of R25.35 in January 2016, the Kumba share price has increased by 2 647% to R696.45. A R100 000 investment in January 2016 is worth R2.67-million today, excluding dividends.

“There is no doubt that the performance of mining stocks, whilst other sectors have battled, has contributed significantly to the country’s retirement wealth. Without this, more citizens would rely on social grants,” Williamson contends in his ‘Postcard to the President’.

As reported by Mining Weekly last month and which is appropriate to reiterate now, mining, preceded by exploration, is the greatest economic multiplier of all business activities, including government expenditure. It therefore makes huge sense for government to enact attractive policies that encourage exploration and mining. Explorers and miners are the pioneers that open up a country. Without them, there is a lack of knowledge about the country’s full potential. By simply taking ore out of the ground, mining initiates significant benefits that extend vertically and laterally throughout the economy, it must be emphasised.