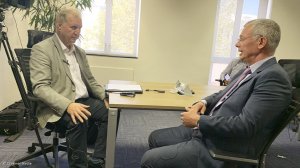 Speaking to Mining Weekly following the company’s interim dividend reinstatement and generation of R5-billion in free cash flow in the six months to December 31, Muller said the proposed solar project would supply not only the required 80 MW of power at Zimplats but also the 30 MW the company uses at the Mimosa mine in Zimbabwe. (Also watch attached Creamer Media video.)

In addition, it would feed power into Zimbabwe’s national power grid as part of a broader in-country strategy.

Currently, the Zimbabwe mines, he said, were totally reliant on power from the Cahora Bassa hydropower scheme on the Zambezi river system.

“All of our power there is renewable energy, so that’s probably the cleanest platinum being produced on the planet at the moment,” he pointed out.

Implats renewable energy plans in South Africa, beyond the company’s hydrogen fuel cell development at its refinery in Srings, would also likely to include solar power generation.

On platinum substituting currently high-priced palladium, Muller said the fact of the matter was that there is sufficient availability of PGMs to meet world demand, with PGM-using technologies available to lower emissions.

“It has to happen in a cautious way so that whenever we produce a new catalytic converter in ensures emission compliance so that the entire world has faith that it will do the job as designed. I support the cautious approach and I look forward to the new emerging technologies that will see substitution and PGM demand being more in balance with supply,” Muller said.

(In the attached Creamer Media video, Muller also speaks on the remarkable turnaround of the company’s PGM mine in Rustenburg, the acquisition of PGM assets in Canada, the company’s latest approach to the development of the Waterberg PGM project in Limpopo and fuel cell development on land the company has donated.)