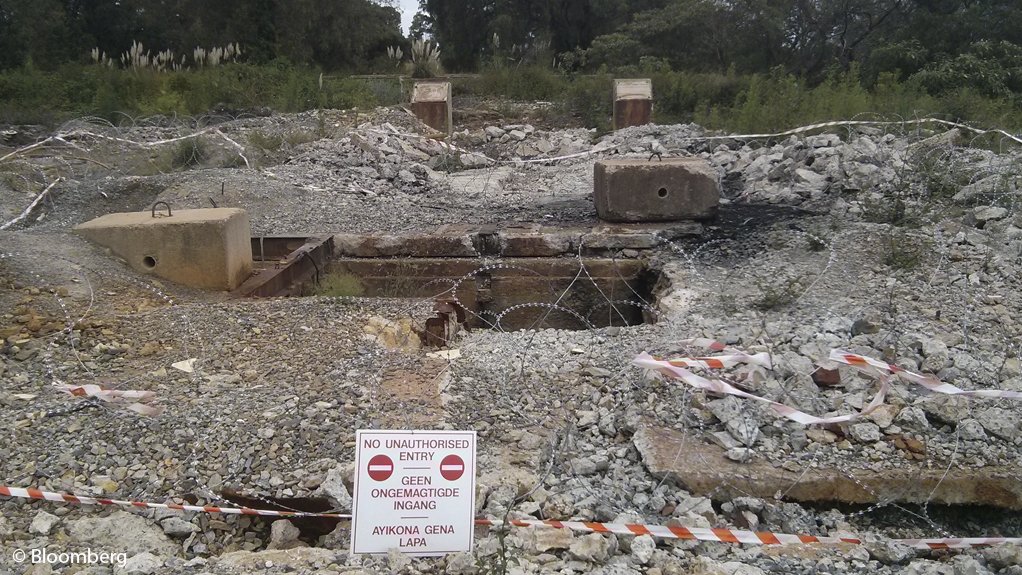 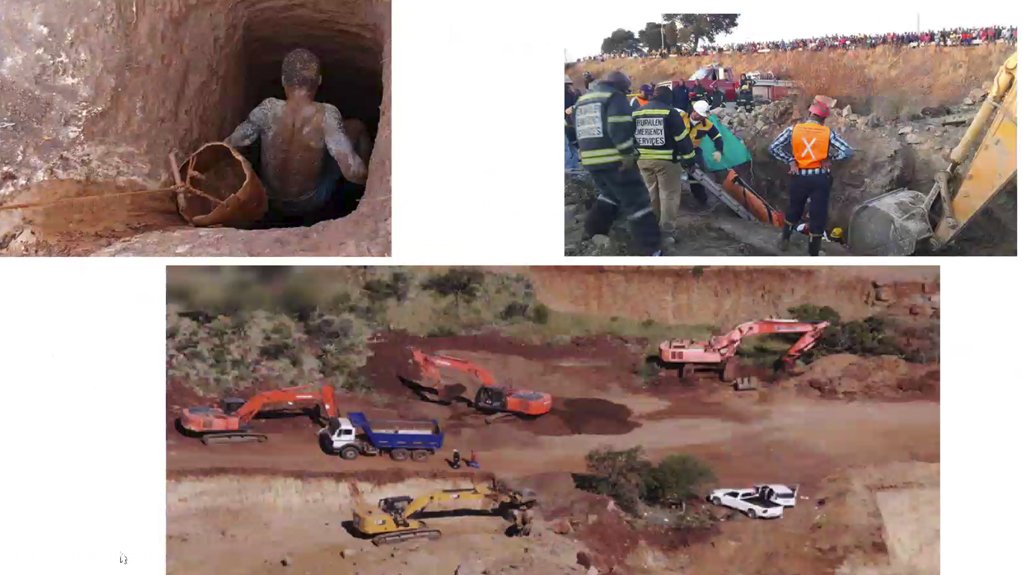 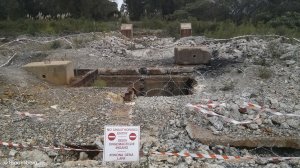 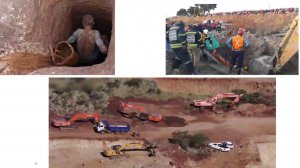 Photo by Bloomberg
Feeble attempts to close disused mine shafts means illegal miners will have an easy avenue to gain access to underground tunnels and ore.
Top left showing an illegal miner entering a disused shaft, followed by an operation to extract trapped illegal miners from another shaft. Bottom picture shows an industrial scale illegal mining operation and the equipment employed, making it difficult to determine legitimate from illegitimate miners.

Minerals Council South Africa legal deputy head Mxolisi Ngubane says that, although the prevalence of illegal mining is not new, the brazenness and evolving nature at which operations are taking place, is becoming increasingly concerning to the wider mining industry and especially to miners in hotspot or sensitive areas.

Attacks on legitimate mining operations are being handled with military-like precision. “They [are] highly skilled, highly trained, highly armed. At times, they even use booby traps . . . aimed [at] their rival illegal miners, [as well as] at some of the [legitimate mining] employees, where they take over [operational] shafts,” adds Ngubane.

“As much as the focus of illegal mining has been on abandoned and derelict mines or shafts that are no longer in use, there are instances where the brazenness is to such an extent that there are attempts to take over [existing] operations,” he explains.

Recent examples of the violence meted out on mining sites include an armed attack on a Harmony Gold operation about two months ago, as well as a four-hour-long assault at Sibanye-Stillwater’s Cooke shaft, where 150 armed men attacked the mine’s security using an assortment of heavy weapons, including AK47s, R1s, R4s, R5s and 9 mm pistols, says Baxter.

He notes that there is a growing trend of illegal miners infiltrating operational mine sites and stealing minerals, as well as other items, such as copper cables and key infrastructure, as they pass through.

“On mine sites, we have a significant amount of theft taking place. That is through a degree of illegal mining . . . infiltrating mostly large-scale operations, and increasingly smaller-scale operations,” says Baxter.

The presence of illegal miners at legitimate mining operations is leading to extortion and violence at mine sites, which is in addition to disruptions caused by community protests. “Many of the community protests and unrest disruptions are caused by the ‘procurement mafia’ – the same concept as the ‘construction mafia’,” says Baxter.

This procurement mafia intimidate a mine’s management to redirect procurement contracts to them, using threats of violence, and/or destruction to property and/or the ability to operate.

He adds that there have also been a significant number of armed attacks, particularly on precious metals mining facilities, as well as on logistics infrastructure such as railways.

On rail theft, Baxter says Transnet is facing the unprecedented crisis of copper cable theft, “losing [about] 60 km of copper and signalling cable a month.”

Theft of rail infrastructure has a “huge impact” on local miners’ ability to sell commodities to the international market, he says. “Last year, we saw bulk commodity exports from South Africa down by R35-billion because of the challenges that Transnet [is] facing”.

As for mining illegally, he says this trend is also experiencing a significant increase, with estimates of as much as 10% of South Africa’s chrome production being illegally mined and exported.

“Just imagine the criminal syndicates that exist to facilitate the transporting of that to the coast.”

However, Baxter says the Minerals Council is not “sitting on [its] hands”, and is involved, with its security team, in significant engagements at a Ministerial level, on a security cluster level and even through to engaging with the National Joint Operational Centre of security forces.

Nonetheless, Ngubane says the illegal mining industry cannot be tolerated because such miners have a concerning and significant disregard for safety among themselves, while their haphazard use of explosives undermines the structural integrity of mine shafts, as well as the health and safety of miners working in those operations.

“There are instances where supplies to ventilation systems have been cut by illegal miners, which puts legally operating miners at risk,” he states.

Further, there is a significant negative impact on the environment, particularly with illegal miners using materials such as mercury to separate gold from ore. “With illegal miners, there is a total disregard for anything that is legal . . . all they are concerned about is getting product,” says Ngubane.

About R7-billion is lost to the fiscus as a result of unpaid royalties and taxes. “What we have also seen is that the world of illegal mining has introduced an entirely new economic system underground in terms of how they supply [miners with] food [and] weapons [and how they] operate ‘banks’ underground,” he says.

Ngubane says not all those going into illegal mines conduct illegal mining, with a portion of those who enter illegal shafts being sales people, “bankers” and those handling weapons.

For their part to address the situation and negate the impact on legitimate operations, mining companies are spending in excess of R2.5-billion on security measures a year, he says.

“There has been heavy investment in the technology that is used. A lot of mining companies are resorting to the use of drones, particularly to monitor perimeters.”

Ngubane adds that there is also increased vigilance on activities on sites near mines, as illegal miners move in heavy machinery and plant, which makes it increasingly difficult to determine legitimate from illegitimate miners.

However, collecting intelligence on illegal mining operations has become more commonplace and important for cracking down on illegal miners.

“[Security] operations are being set up, which enables us to target some of these syndicates. There are major interventions that have been introduced, particularly in Mpumalanga and Limpopo, where the focus has been on illegal mining,” he says.