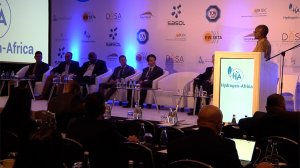 A panel discussion provides insights into the timescale and opportunities in developing hydrogen mobility in South Africa.

Hydrogen projects are bankable and capital is available to fund them, but there are measures that must be pursued to ensure South Africa can capitalise on these projects and get its share of the available funding to get projects off the ground.

This was a key message from a panel discussion during day two of the Hydrogen Africa Conference and Expo 2022, held in Sandton on September 29.

Nedbank Infrastructure, Energy and Telecommunications head Mike Peo said the narrative should be how to transition South Africa to hydrogen to re-industrialise the country, with considerable opportunities being available.

He mentioned that, as this is pursued, capital for funding of hydrogen projects would include blended financing, with other speakers also calling for innovation in funding models to ensure the requisite capital is obtained.

Peo pointed out that capital was available, but said clearer policy direction was needed to allow the private sector to develop more projects.

He also noted that there was considerable capital available for the prefeasibility studies of proposed projects.

Peo emphasised that South Africa would need to position itself to be globally competitive in this industry, given that many markets and countries were vying for the capital.

Conduit Ventures UK CEO John Butt pointed out that the green hydrogen industry was in its infancy but maturing rapidly.

He said one objective, therefore, was to mitigate innovation risks.

Another risk is posed by the value chain also being in the development phase, and having multiple components to it, which could be perceived as a financing risk by investors.

Therefore, he said these needed to be derisked so that capital could flow.

While this was challenging, Butt said it was doable, with the company’s approach, for example, being to target the right partnerships and to collaborate to navigate challenges and the different components of projects.

Wesgro chief trade and investment officer Garth van der Horst, meanwhile, emphasised that the country needed to have a manufacturing paradigm in place.

He pointed out that the concerns around the hydrogen industry being a heavy water user were not as big an issue as perceived, with this only accounting for about 2% of the operational cost of hydrogen projects.

However, the biggest challenge was in terms of electricity, with this constituting a large component of the operating cost, Van der Horst informed.

He pointed out, however, that a significant amount of solar and wind energy potential would be unlocked when the country solves its wheeling framework problem.

Also, he noted that, until the issue of electricity being a considerable source of funding for municipalities was solved, this would present a bottleneck to the industry.

Moreover, he said Wesgro was exploring the potential for hydrogen projects in the Western Cape, near Saldanha, as this enjoyed proximity to a special economic zone and ports.

Van der Horst said conservative estimations put the global demand for hydrogen by 2050 at between 400-million and 600-million tonnes, with 75% of this being demand for green hydrogen.

He said many countries would be unable to meet their own requirements, therefore, there were opportunities for megaprojects in countries like South Africa and Namibia, but these would not be sufficient either.

Van der Horst indicated the need to work collaboratively and for local and export offtakers to be pursued. For example, he pointed out that there was local demand, such as a steel plant in Saldanha that could reopen if it had green hydrogen to power it.

Meanwhile, Herbert Smith Freehills senior associate Ernst Müller emphasised that due diligence on green hydrogen projects must be done early on. He also referred to the need for comprehensive pre-feasibility studies and risk matrices to identify issues from the outset.

The importance of proper due diligence was echoed by TÜV SÜD Hydrogen PtX and Storage VP Dr Thomas Weiss, who noted that this would help ensure that projects are bankable.

Further, he said that while there was capital available, it was not being dispersed.

Also, for South Africa, it was noted that given that there is funding available, and offtake demand, the country needs to ensure that its value proposition is good, given that other African countries have similar potential and are also engaging with investors.

This value proposition must come from both a capital returns and social perspective.

Also, in terms of innovative funding, areas such a crowdsourcing, for example, could be explored, from communities that would benefit from these projects.