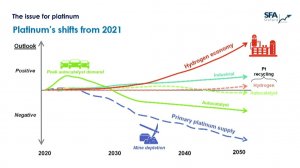 Other key points highlighted by Forrest in his keynote address included:

SFA Oxford has been able to draw on its 20 years of in-depth industry experience to identify the important future trends, which enabled the company to state that, from the middle of this decade, unless new projects come on stream, mine depletion means that primary supply will contract and secondary supply from recycling will be insufficient to avoid a significant deficit by 2050.

Automotive emissions legislation was described as remaining positive for PGMs in the nearer term. Tightening emission standards will be key to the continued acceptance of the internal combustion engine and hence the use of PGMs in autocatalysis.

In the mid to the late 2020s, the catch-up in emission standards in some of the less well-developed regions, offers some cushion for PGMs-based autocatalysis against the migration from the internal combustion engine to electric vehicles. Globally, there is a clear timeline to roll out tighter emissions legislation as much more stringent future emission standards are now under discussion, a reference to Euro 7. Whatever the outcome of legislation, personal mobility will continue to be a non-negotiable requirement across all regions of the world.

Looking further out at the types of vehicles that we will be driving, helps us to see the future shape of PGM markets. To address the pressing issue of deteriorating air quality, particularly in urban areas, decarbonisation on a global scale is essential. but there will be considerable regional variations in the speed of uptake of battery and fuel cell electric vehicles. In the next decade, the overall number of internal combustion engine vehicles built is forecast to still increase with corresponding growth in PGMs demand.

This all changes in the following two decades, with only modest light vehicle production growth and internal combustion engine vehicles continuing to lose share to electric vehicles, leading to a decrease in PGM autocatalyst demand.

The hydrogen economy is a potential game changer for platinum demand in the very long term, with most of this demand predicted to come from fuel cell electric vehicles. Platinum, ruthenium and iridium are the mission critical metals for hydrogen production and fuel cell deployment, but ruthenium and iridium are not at the forefront of mine planning, which raises the question of whether there'll be sufficient supply of these metals in the future.

After 2030, the existing trends and industrial uses are expected to persist. However, total industrial demand is forecast to edge up to 1.5-million ounces in 2050 as growth in the chemical and other end-uses outweighs the declines in dental and electrical requirements.

Rising global data storage requirements such as cloud storage at data centres are likely to lift demand for hard disk drives, and thus platinum use in electrical devices. Longer-term, platinum demand is projected to increase steadily to 2050, with expanding silicone production in China, and the rest of the world continuing to raise catalyst requirements in the chemical sector.

Electric cars are set to displace combustion engines whose auto catalysts represent PGMs' greatest end use, but there is a huge uncertainty around the rate and speed of penetration of electric vehicles. Might there be a long tail of hybrid vehicles requiring PGMs and will there be enough rhodium to service them? Ultimately, rhodium supplies are set to be half of today's levels by 2050, when it is estimated that 44-million vehicles will still require PGMs.

The total automotive production forecast is limited to 114-million vehicles in 2050, because the market is predicted to essentially reach saturation as vehicle ownership plateaus. As congestion in urban areas and on road increases, fewer people will choose to drive, accelerating the shift towards mass transit, such as buses, trams, trains, with the ensuing drop in emissions per capita.

In the 2040s, the platinum market is projected to move into a widening deficit because of declining primary and secondary supply and increasing demand from the hydrogen sector. The risk is that the development of the hydrogen economy is slower than predicted or that alternative technologies that do not use platinum win out, which results in lower demand than the market extrapolation. (Also see graphic.)

From 2014 to 2050, when hydrogen demand is expected to rise by 2.2-million ounces, primary and secondary supply is set to fall by 1.7-million ounces. So even if hydrogen market demand were lower, the platinum market could still be in deficit, owing to the decline in production. As we head towards 2050, many of today's mines will be exhausted, with implications for the associated processing infrastructure and jobs. Might the remaining mines continue to have long tails of production? And could they justify their processing overheads? Will tomorrow's mines be fully mechanized and achieve net-zero emissions?

Moving to another continent now, in China, population trends have a particular impact on platinum jewellery demand. While China remains the largest market for platinum jewellery, the demographic pressures of a shrinking population and fewer marriages weighs on its consumption of platinum.

Bucking this trend will require a huge marketing effort with significant shift in focus, and initiatives that align with the changing demographic landscape. For example, it is a tradition in Japan for men at retirement to buy thank-you gifts for their wives.

"Could this potential new market represent an opportunity to regain some of the lost ground in wedding demand? One thing's for certain, we cannot assume that it's business as usual for platinum jewellery, by the time we reach 2050," said Forrest.

In addition to demographic pressures, a significant trend over the next two decades is a major headwind for global GDP growth from the high level of public and corporate debt. The high debt to GDP ratio has been shown to retard economic growth and governments have now borrowed more money than at any point in history, a debt-to-GDP ratio of 90% has been identified as the level at which the burden slows economic growth.

Continuing with some of these contributing factors to rising debt, limiting global warming to 1.5 oC, implies significant economic cost from major changes to industry and agriculture. To limit global warming to 1.5 oC relative to pre-industrial times, the world on average must be net carbon neutral by 2050. Thus, a net-zero policy is non-negotiable, and must be implemented, regardless of cost and despite the impact on GDP.

Russia and the northern limb in South Africa predominantly make up tomorrow's supply base, given the high palladium content of their ore. Russia is set to become the largest producer of all PGMs by 2050. Supply will become inelastic to price because nickel pays the bills.

There is a possibility that shallow Zimbabwe supply could replace depleting mature South African supply. The regional distribution of supply in South Africa is likely to change with a much greater emphasis on the northern limb. What is the potential of what is left? How much do we need to pay for it? In other words, what is the PGMs incentive price?

Vehicle production peaks between now and 2050, as city streets become overcrowded, and personal vehicles are phased out. If combustion engines are outlawed, they could be a recycling peak as governments force combustion powered engines into early retirement.

Global PGMs recycling is forecast to peak at about 8.3-million ounces in 2038, coinciding with a predicted peak in autocatalyst recycling, which then provides about 88% of secondary supply.

As electric vehicles take up an increasing share of the market, a tipping point is reached in 2038 at which several end-of-life diesel and gasoline vehicles start to decline, as does the recovered PGMs volume from spent autocatalysts.