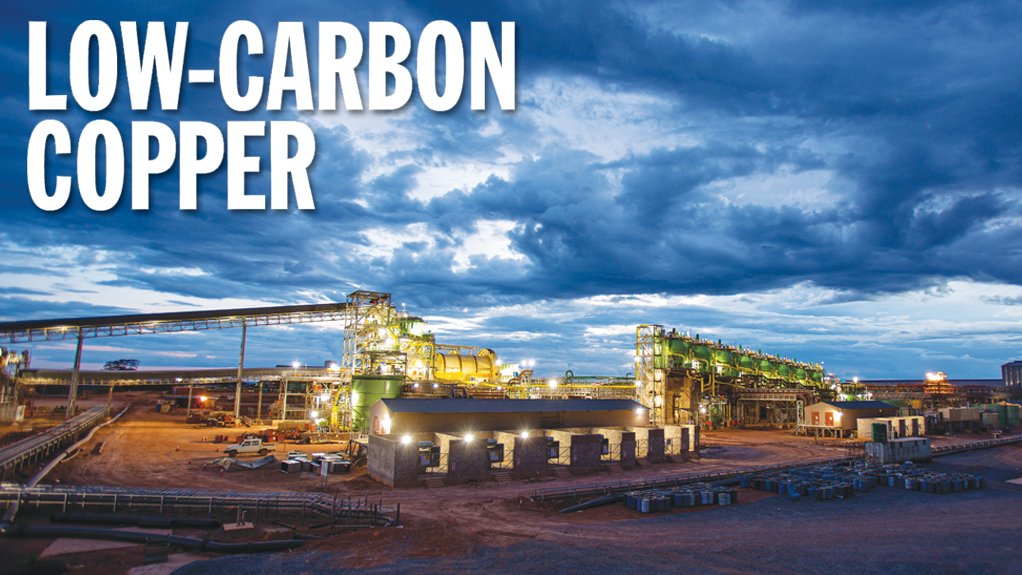 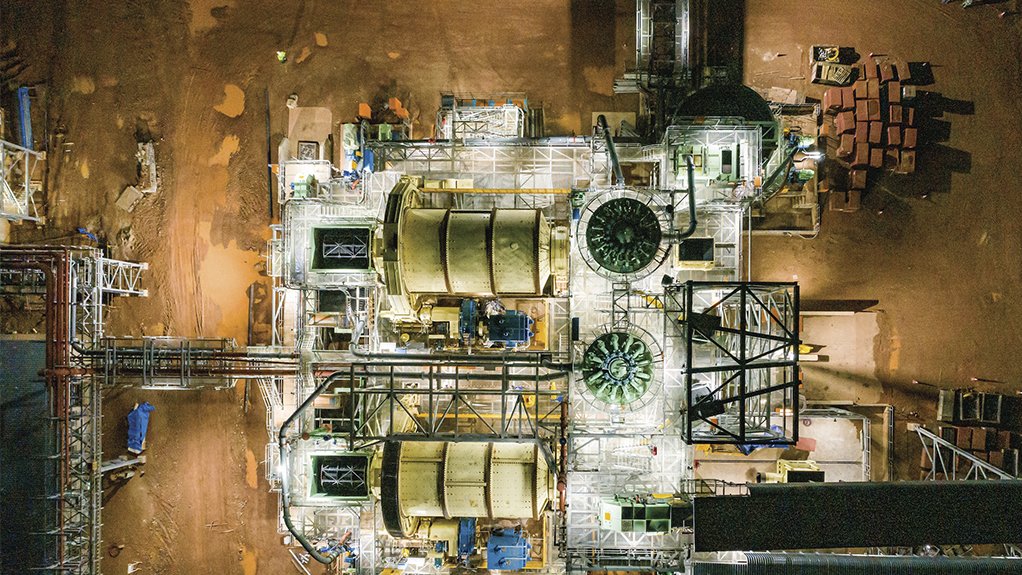 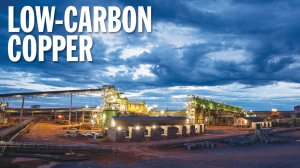 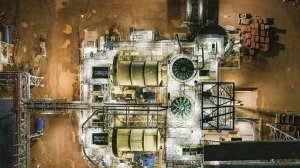 While Kamoa Copper, in the Democratic Republic of Congo (DRC), is on track to become the second-largest copper mining complex globally, and the biggest in Africa, it is also poised to be among the greenest of copper mines.

This is largely on the back of the project being completely powered by hydroelectricity, and the intention to implement a switchover to electric mining vehicles, Kamoa Copper CEO Mark Farren tells Engineering News & Mining Weekly.

The financing agreement was initially signed as a public–private partnership in connection with the restoration of the Mwadingusha hydropower plant, where all six turbines at the plant had been refurbished and the sixth turbine was commissioned early last month, generating 78 MW of power.

Under this financial arrangement, rehabilitation and upgrade activities are financed by Kamoa Copper’s holding company, Kamoa Holding, by way of a loan to SNEL, which will be repaid through a deduction on monthly power bills incurred over the loan’s term.

An estimated 162 MW of hydropower is expected to be generated by upgrading Inga II’s Turbine 5, which, when combined with the 78 MW of hydropower from the Mwadingusha facility, will give Kamoa Copper priority access to a combined 240 MW of clean, renewable electricity.

Since June, rehabilitation scoping works and technical visits have been conducted by Stucky of Renens, Switzerland, the appointed engineering, procurement and construction management company.

The hydropower that Kamoa Copper and Ivanhoe are sourcing from SNEL, which Farren says comes at $0.06/kWh, is sufficient to power the project’s Phase 1 and Phase 2 mining and processing activities. Once the Inga II project is commissioned, there will be sufficient power for the company’s expansion plans, which include the construction of another concentrator plant as well as its own direct-to-blister smelter.

The company aims to treat up to 1.2-million tonnes of copper concentrate at the proposed smelter, which will amount to a copper output of about 600 000 t/y. The balance of the concentrate in later years, once production increases, could still be treated at the nearby Lualaba Copper Smelter, which currently treats about 150 000 t/y of the mine’s copper concentrate.

Farren highlights that the mine’s direct-to-blister smelter will ensure “enormous savings” on transport costs and is in line with the DRC’s ambition to beneficiate more minerals locally.

Kamoa Copper is working with original- equipment manufacturers to create solutions for mining equipment which will be much less carbon intensive than existing technology.

Farren is set on achieving the lowest possible carbon emissions per tonne of copper produced, which bodes well as an example of what the mining industry can do.

A 2020 independent audit of Kamoa’s greenhouse-gas (GHG) intensity metrics, performed by Canadian consultancy Hatch, confirmed that the project would be among the world’s lowest GHG emitters per unit of copper produced.

UK-based consultancy Wood Mackenzie identified the project in 2016 as the largest copper discovery ever made on the African continent, and the world’s largest undeveloped high-grade copper discovery at the time.

Kamoa Copper is in the process of ramping up its Phase 1, 3.8-million-tonne-a-year concentrator plant towards nameplate steady-state design performance.

The plant achieved an average milling rate of more than 9 000 t/d at an average feed grade of more than 6% copper, producing just over 600 t/y of copper in filtered concentrate – the plant’s steady-state daily production rate.

The concentrator plant produced 14 815 t of copper in concentrate for August, bringing the total year-to-date production to 36 712 t of copper for delivery to either the Lualaba smelter or international markets.

The company will also install an additional concentrate filter on the Phase 1 plant, which will allow for higher production numbers, beyond the steady-state design capacity. It is expected that the filter installation will be completed by the end of this month, and increase the production capacity of the Phase 1 plant to beyond 200 000 t/y.

At this rate, Kamoa Copper is on track to produce between 80 000 t and 95 000 t of copper this year, after starting with initial copper concentrate production in May and achieving commercial production in July.

Moreover, Kamoa Copper is advancing the construction of the Phase 2, 3.8-million-tonne-a-year concentrator. This project is about 44% complete, with civil works completed, and structural steel, mechanical, piping and platework erection, as well as installation, under way.

The Phase 2 concentrator is on track for completion in the third quarter of 2022 and will increase the mine’s copper output to 400 000 t/y.

The company has 3.59-million tonnes of high- and medium-grade ore grading 4.77% copper on surface stockpiles, mined at the Kakula and Kansoko mines.

Kakula is poised to be the world’s highest- grade major copper mine, mining 3.8-million tonnes a year at an average feed grade of more than 6% copper during the first five years, and 5.9% over the first decade of operations.

Once the project’s phased expansion scenario comes to fruition, to 19-million tonnes a year, Kamoa-Kakula will be the world’s second-largest mining complex, with copper production of more than 800 000 t/y.

Further study work is under way to accelerate the Phase 3 mine and concentrator expansion plans, says Farren. This includes optimisation work to determine mining production capacity and costs at the various mining areas on the Kamoa complex, including the Kansoko mine, as well as the Kamoa North and Kakula West deposits.

Some of these deposits may be developed only as part of a Phase 4 expansion plan.

It is envisioned that each mining operation will be a separate underground mine, with shared processing facilities and surface infrastructure.

Ivanhoe Mines continues to progress with exploration drilling on its wholly owned Western Foreland licences, which cover a combined 2 550 km2, and are in close proximity to Kamoa.

The Western Foreland exploration project consists of 17 licences to the north, south and west of the Kamoa mining licences.

Among these is a large-scale sustainable livelihoods programme, which aims to train and support local farmers to move from subsistence agriculture to commercially viable agribusinesses. More than 350 farmers are involved in this programme, growing crops such as maize, vegetables, bananas and pineapples.

Additionally, more than 100 fish ponds have been constructed in collaboration with local farmers and more than 50 honey- producing hives have been placed with trained communities.

Kamoa Copper prioritises the participation of women in agribusiness and has established a commercial poultry and egg initiative with female participants from the local community. Like the other farming initiatives, the women sell their produce to the Kamoa Copper canteens to help feed over 5 000 employees and contractors.

Moreover, the company’s Transformation Department is heading up a training centre where Congolese men and women receive training in both basic mining-related skills and advanced mining techniques through simulators and on-the-job training.

The potential local employee pool at Kamoa is strengthened through targeted interventions, supported by Kamoa Copper at both primary and secondary schools in the area. These young students will soon be able to study mining-related courses and degrees at the Kamoa Copper-sponsored university in Kolwezi. This tertiary facility is currently in the scoping phase and will take in its first students in the next two to three years.

The establishment and support of local businesses is a priority for Kamoa Copper’s Enterprise and Supplier Development Department.

To date, a highly successful brickmaking cooperative has been established, and is delivering high-quality bricks to sustain the company’s rapidly expanding office and accommodation complexes.

Recently, a sewing programme was established to provide the linen, soft furnishing and personal protective equipment required by the company.

Farren confirms that several other local business initiatives are in the pipeline for development.

“We are immensely proud of Kamoa Copper’s outstanding commitment to social and environmental responsibility, as well as its significant investments in the development of policies and programmes for workplace safety, diversity, community development and education,” says Ivanhoe co-chairperson and founder Robert Friedland.