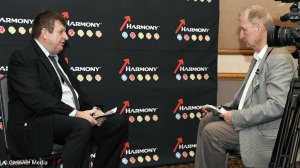 Speaking to Mining Weekly in a one-on-one video interview, Steenkamp said that it is apparent that a number of criminal syndicates had begun robbing gold plants. (Also watch attached Creamer Media video.)

“We’ve had attempts on our plants to steal gold. Gold was stolen at Kalgold. There was a further attempt at Kalgold and fortunately for us, they didn’t manage to steal anything from the plant, but it is a big concern,” said Steenkamp.

“From our side, what we’ve done is we’ve met with the Minister. We’re trying to find ways and means to combat these syndicates and we’re not just talking about the foot soldiers, but we need to find the real culprits.

“What we’ve done is to sharpen up on our security. We’ve spent more than R30-million in capital in the last three years just improving our walls around the plants and making sure we’ve got areas where people can’t get through.

“We spend a lot of operating expenditure on improving security around our plants, which has worked because we see that with the last Kalgold attempt, they could not get into the smelt house, so the things we put in place did work for us.

“But we have a fantastic team of people from a security perspective. We’re also, as an industry, really tried to influence government to help and assist us,” he said.

Bloomberg has reported that in December, a criminal platoon armed with AK-47 and R6 assault rifles stormed the smelting plant at Gold Fields’ South Deep mine.

The industry has for years struggled with illegal miners, but over the past year, attacks by organised syndicates on plants to steal concentrate or smelted gold have increased sharply.