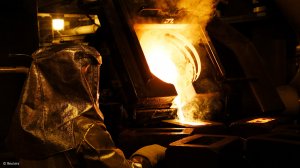 The world’s largest gold producer by output Barrick Gold reported adjusted earnings of $0.24 a share, compared with $0.11 a share in the comparable period last year. This beat analyst expectations of average earnings of $0.20 a share.

Barrick reduced its debt load by $1.4-billion so far this year and the company said it was on track to meet its 2016 reduction target of $2-billion. In the medium term, it wants to reduce its $8.5-billion debt to below $5-billion.

NEWMONT DOUBLES DIVIDEND
Meanwhile, Greenwood Village, Colorado-based Newmont doubled its quarterly dividend to $0.05 from $0.025 previously. The company also refreshed its dividend policy, which is linked to the gold price. CEO Gary Goldberg stated that the revised policy had the potential to increase payout levels by more than 100%, starting in the first quarter of 2017.

Newmont also raised the lower end of its 2016 gold production forecast to between 4.8-million and 5-million ounces of gold this year, compared with a previous forecast of 4.7-million to 5-million ounces.

Attributable output at Newmont rose to 1.25-million ounces in the quarter, up from 1.21-million a year earlier.

The miner's AISC rose to $925/oz from $879/oz before, impacted by inventory adjustments at its Yanacocha mine, in Peru, and Ahafo mine, in Ghana.

GOLDCORP BACK IN BLACK
Vancouver-based Goldcorp reported net earnings of $59-million, or $0.07 a share, compared with a loss of $192-million, or $0.23 a share, a year earlier.

Goldcorp also announced a maiden indicated resource of 4.5-million ounces gold indicated and 900 000 oz of gold inferred at Porcupine's new Dome Century project, in Ontario. A study for a potential large-scale, openpit mine is also under way.

Excluding items the adjusted net income was $56.6-million, or $0.25 a share, beating analyst expectations of earning $0.19 a share.

Agnico stated that operations continued to deliver solid production and cost performance, and it now expects to exceed the upper end of its 2016 production guidance of 1.6-million ounces.

The company reduced net debt by about $154-million, to $587.9-million, as at September 30. Cash and cash equivalents and short-term investments totalled $627.4-million; Agnico declared a quarterly dividend of $0.10 a share.