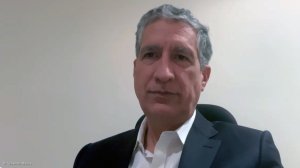 JOHANNESBURG (miningweekly.com) – Gold is poised to be a "refuge of choice" in the years ahead owing to the extent to which money is being printed and world debt is rising, AngloGold Ashanti CEO-designate Alberto Calderon said on Tuesday.

Speaking to Mining Weekly in a Microsoft Teams interview ahead of taking office on September 1, Calderon expressed excitement to have the opportunity to lead AngloGold because of its significant gold upside. (Also watch attached Creamer Media video.)

Calderon also spoke of being a big fan of copper, which in AngloGold’s search for gold has been found in large quantities at Quebradona, in Colombia, the land of his birth.

Covid permitting, the currently co-located Calderon will spend the first four weeks of his AngloGold tenure in Johannesburg.

Until March of this year, he was CEO of commercial explosives manufacturer Orica, and previously a senior executive at BHP and former CEO of Cerrejón, the Colombian coal-mining company. Christine Ramon will remain as interim CEO until Calderon takes up his new position, before resuming her role as AngloGold CFO.

In the question-and-answer interview, Calderon spoke of:

Mining Weekly: What made you decide to take up the AngloGold CEO job?

Calderon: I want to start by saying how excited and honoured I am by having been appointed as CEO. I’ve been in the mining industry for 20 years. I’ve worked with South Africans for 20 years, and I’ve known about AngloGold. I’ve worked at BHP, I’ve worked at other companies and Orica but I know of the quality of AngloGold. It’s an iconic world mining company and in the last months, I’ve studied its potential and I’m so excited by the opportunity to create value internally, organically, in the company. It has great assets, it has great people, we just need to pull all of it together and get into our projects, forecasts and costs and we should eliminate our very significant discount to fair value.

That word 'organically' tells me quite a lot. Do you see sufficient internal growth options?

I do. Look at the track record in the last year. They were able to bring in six-million ounces of resource into the company. If we keep that rate we will be fine. But look at the plans that we have and they are all organic, internal growth. We have very large projects. We have Geita, in Tanzania, and we have Quebradona, in Colombia, and those projects the market is valuing at zero. They are not being given any credence. If in one or two years we can do enough work to convince the market that they are going to happen and that, for example, Geita is going to have a ten-year life and not a five-year life, and that we’re going to develop Quebradona, then that will eliminate part of that discount. We also have issues on cash conversion and a multitude of things that combine to cause some opacity and hence our risk perception in the market.

As a former International Monetary Fund person, do you see gold’s role increasing in importance going forward in a world with unusual economic momentum?

Yes. I’m very happy to be in gold and the reason for that is we know that the United States, European and Australian central banks are printing money like there’s no tomorrow. We know that the world is full of debt and hence, at some point in the future, maybe not in the next months, but certainly in the next years, the refuge of choice will be gold. I’m actually quite optimistic and I like working in a company with such an upside from that point of view.

I know that has been an issue that has been widely discussed in the past. But I can tell you that it is not my priority in any sense of the word. I will be concentrating on other things but it is something that is one of the suite of options to address the discount to value, and at some point in time in the future, it is something that the board and I will study again. It is not something that I need to do urgently, but we need to address it in one way or another in the future. It’s rightfully something that is asked all the time and we need to say, okay, were going to do this or not, but I do say there are many other more pressing issues that I will address first.

Where will you be based?

My plan is to be co-located in different parts of the world, including in Johannesburg. Covid permitting, I would want to spend the first four weeks of  my tenure with AngloGold in Johannesburg, because that’s where the head office is. But I will also spend my time in the second-largest office, in Perth, and the third-largest office, in Denver, and I do plan to go to the operations. For the time being we’ve agreed that I will be co-located currently where I am (in Australia) and then in due time we will decide where I will live.

I see you are a believer in environmental, social and governance (ESG). Against that background, will you be prioritising the use of renewable energy?

I am in favour of ESG. Let me get my hands around the business at this stage. I can tell you that what I have seen AngloGold has made an enormous progress in reducing greenhouse-gas emissions, which have declined by 43% in the last years, and it has ambitions to be carbon neutral. So, I’m going to understand those targets. I want to make sure that we can fulfil them. I will probably get back to you in the future if this is part of the suite of options. It clearly should be at some point but I want to better understand the current plans.

AngloGold Ashanti also mines copper, an important climate change metal. Will you be putting any new emphasis on copper production?

The project that we have in Colombia, Quebradona, where they were looking for gold, is a fabulous project. It has an expected production of 130-million pounds of copper. That is significant in world-class terms. Copper is an interesting product because the world cannot reach a carbon-free environment without copper. You need copper for solar panels, electric cars, electricity transmission and so copper is a commodity of the future. I don’t know at this stage of any other plans, and the company is mainly a gold company and that will not change, but I think we’re very happy to be able if we can to develop this copper/gold project in Colombia. It is a wonderful commodity, copper. I’m a big fan of it.

AngloGold chairperson Maria Ramos expressed confidence in having the right person to lead the company forward and, drawing on his huge leadership experience in the resources sector across a variety of geographies, realise what she described as AngloGold’s outstanding potential,

The CEO-designate described AngloGold as bringing together a high-quality portfolio and a strong commitment to deliver social, environmental and shareholder value that he said he relates to strongly on a personal level.