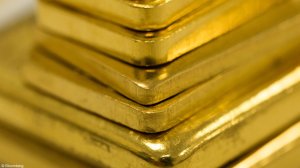 Biden said 90% of US adults will be eligible for Covid-19 vaccines by April 19, boosting risk appetites even as they linger around new strains of the virus. The president will also this week unveil major plans to reboot the US economy and boost employment.

Gold is heading for its first quarterly decline since 2018 as a nascent global recovery reduces the safe-haven’s appeal. A stronger-than-expected dollar and rising bond rates have also dragged bullion down from its record high in August last year.

Spot bullion was 0.2% lower at $1 709.34/oz by 10:18 a.m. Shanghai time, putting it on course for the lowest close since March 8. Palladium extended its biggest one-day fall since November. Platinum and silver declined. The Bloomberg Dollar Spot Index was flat.

In a speech on Wednesday, Biden is expected to focus on infrastructure as his administration aims to reshape the post-pandemic US economy and government. Investors are also on alert for any more fall-out from the implosion of hedge fund Archegos Capital Management.