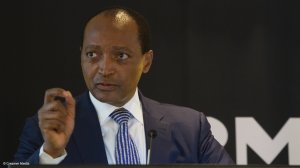 JOHANNESBURG (miningweekly.com) – Globally competitive mining legislation is critically important for South Africa, African Rainbow Minerals (ARM) executive chairperson Patrice Motsepe said on Thursday when he gave his full backing to the “once empowered, always empowered” principle currently the subject of negotiation between the Chamber of Mines and the Department of Mineral Resources.

Speaking at the presentation of ARM’s basic earnings loss of R565-million in the 12 months to June 30, the head of the diversified multicommodity company urged South Africans not to divorce themselves from the regulatory, legal, fiscal and monetary frameworks of the country and spoke of the need for mining companies to involve themselves in the laws and regulations passed that had an impact on mining and the country's economy as a whole. (Also watch attached Creamer Media video).

Announcing a more permanent and sustainable funding solution for ARM’s own broad-based economic empowerment (BBEE) trust, Motsepe said from a pure global and domestic investment viewpoint, he was convinced that the application of the “once empowered, always empowered” principle was the right thing to do.

“Because it’s a cost, certainty is critically important. If shareholders have to incur a cost, just spell it out. Don’t change the rules of the game midway,” he urged.

The issue has arisen over government's insistence on mining companies having a 26% black economic empowerment (BEE) shareholding in perpetuity.

“There’s an educational process that all of us have to do to make all the stakeholders understand that there’s a significant benefit for our communities, for the economy, for job creation and for the future of the mining industry, that we create certainty,” he said, adding that he hears shareholders all over the world expressing criticism of having incurred the BEE cost and then being expected to incur it over and over again.

“I’m a major shareholder and I have incurred that cost personally and they’re absolutely correct,” Motsepe told the presentation attended by Creamer Media’s Mining Weekly Online.

Even as inappropriate and disadvantageous as perpetual BEE was, he said, it was more populist for politicians to insist on ongoing BEE refreshing.

“The way you get long-term black participation, global competitiveness and not in-and-out participation is to create South African partnerships that are beneficial to black and white partners. Unfortunately, we’re still going to have this black-white discussion for some time,” he lamented, adding that the challenge was for the country to create a future for poor black people, who had to be made part of the economy in a meaningful way for the benefit of all.

He had personally lost sight of the company’s own BBEE trust and before he realised it, there was a guarantee over it of R850-million.

“But we’ve tidied it up and I think we’ve learnt from that,” he added.

He described a globally competitive legal, regulatory, fiscal, monetary and tax dispensation, as well as an equitable mining dispensation, as being critically important to allow mining companies to fulfil their obligations to labour, to communities, to the country and to all the country's people.

He said it was no secret where his political affiliations lay but the critical issue was to ensure that South Africa’s democracy ranked among the world’s best.

That would mean the country exercising absolute zero tolerance on crime, not only in word but also in deed.

“The beauty is that we’re really becoming a nonracial society and we have a duty to create a bright future,” he told mining investors, analysts and media.

On the company’s sojourn into copper mining in partnership with Vale of Brazil, in Zambia, he referred to the changes Zambia had made in the legislative framework, which had resulted in the partnership having to resort to ongoing engagement with the Central African government.

“When the copper price rises and there’s a perception that the mining companies are doing well, there’s almost inevitable inclination to increase taxes,” he said of the Zambian situation, where there was a need for an education process – which was also necessary in the case of community expectations at the company’s Modikwa platinum mine in South Africa.

“We’ve got to educate the governments in Africa. The good times are followed by very lengthy times of serious challenges. Those companies that have succeeded have used the profits from the good times to save and invest and to prepare for the challenge of the difficult times,” he said.

At question time, Motsepe spoke of the possibility of ARM and Vale collectively selling out of the Lubambe copper mine in Zambia, in which more than $400-million had already been invested, which followed his earlier comment on the need to “engage and educate” at the troubled Modikwa, where the expectations of communities were, he said, sometimes “unachievable”, particularly at this time of depressed commodity prices.

In the 12 months to June 30, ARM’s headline loss in copper increased by 29% to R555-million on lower dollar copper prices and a weaker average rand/dollar exchange rate at which the results were translated.

Cost-cutting initiatives had resulted in unit-cost decreases at Lubambe, Modikwa, Nkomati nickel mine, and iron-ore, manganese ore and coal operations; there were also below-inflation unit production costs at Two Rivers platinum mine.

ARM completed the sale of its 50% indirect interest in Dwarsrivier chrome mine for R450-million.

It achieved its lowest lost-time injury-frequency rate of 0.32 for every 200 000 person-hours worked in a fatility-free year; lost-time injuries also fell to 86 from 103 in the 2015 financial year.

Sales for the year decreased by 6% to R8.75-billion with sales from the Assmang joint venture almost
unchanged at R10.33-billion for the year.

The segmental earnings before interest, taxes, depreciation and amortisation (Ebitda) margins were all down, except for iron-ore where margins were maintained at 37%.

ARM's Ebitda excluding special items and income from associates and JVs was a 43%-lower R1 185-million.

These results were achieved together with ARM's partners at the various operations, made up of Anglo Platinum, Assore, Impala Platinum, Norilsk Nickel Africa, Glencore, Vale and Zambian Consolidated Copper Mines.