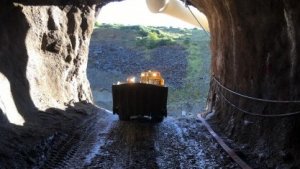 Dual-listed Galantas Gold has started underground production at the Omagh project, in Northern Ireland, with longhole drilling commencing in the first series of stopes.

Installation of the secondary egress from the 1 096 to 1 052 level is in the final stage of completion and is expected to be commissioned in about two weeks followed by the blasting of the stopes.

The mine has a series of five stopes, which will be mined in the first block, using the longhole open-stoping method, with cemented rockfill as the method of backfill. The stopes will be mined between the 1 072 and 1 060 levels on the Kearney Vein.

"Thanks to the hard work of our team on the ground, Galantas has now entered the next significant phase of the company's growth as we commence underground production,” said CEO Mario Stifano on Tuesday.

The first series of accredited training courses through the Mineral Products Qualification Council has been completed and a group of miners from the project have received their certificates. This training meets with the requirement by the Health and Safety Executive for Northern Ireland to implement a formalised training course in all mines. Training course accreditations include shotfiring, jumbo drilling, operation of load-haul-dump equipment, truck driving, services installation and shotcreting.