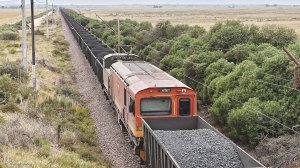 The longest production train in the world is in daily operation on South Africa’s manganese line. State-owned rail company Transnet Freight Rail broke world records on October 24 with this 375-wagon train, which is powered by the tractive effort of four locomotives. The 4 km-long train carries 24 000 t of manganese ore 860 km, from the Northern Cape to the Port of Saldanha, in the Western Cape. The train is driven by a single person, in this record-breaking instance, 33-year-old Lisa Clarkin in the lead locomotive. The three trailing locomotives are controlled through radio remote communication.