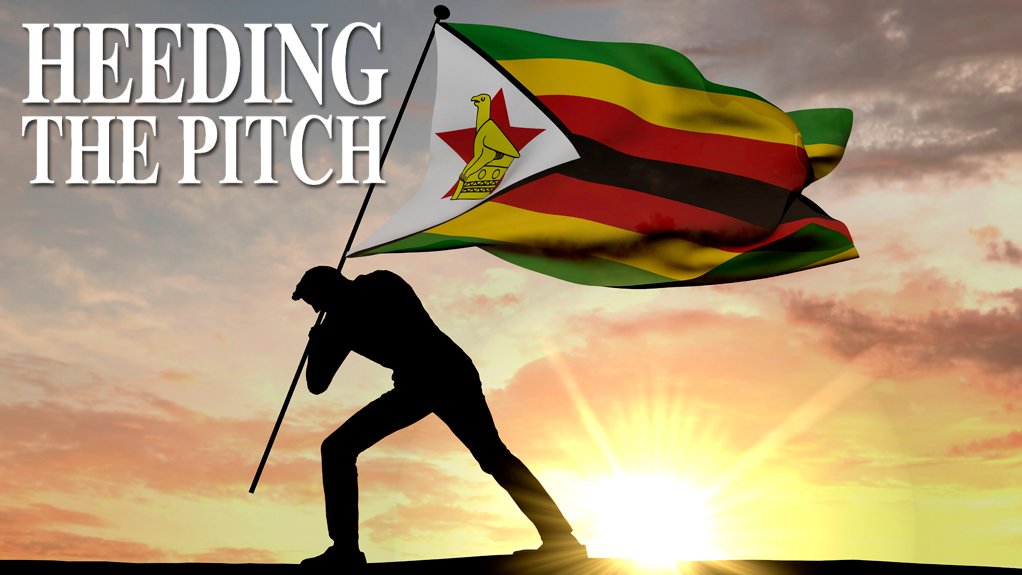 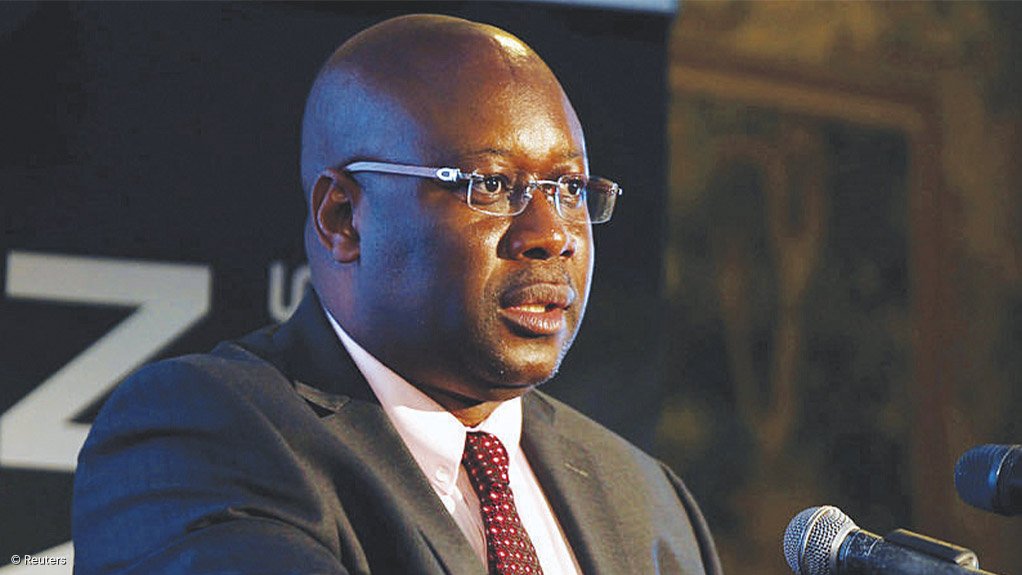 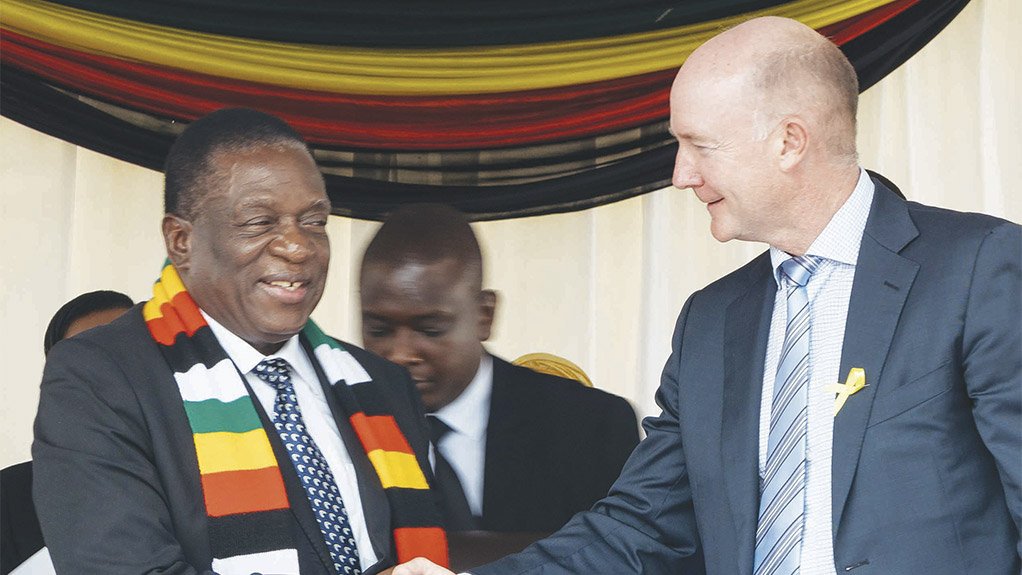 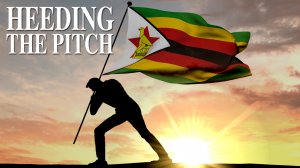 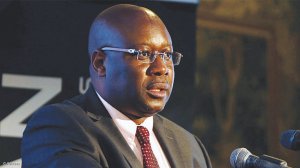 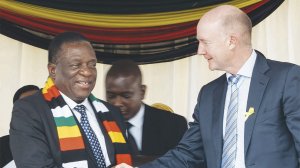 Photo by Reuters
WINSTON CHITANDO If all known lithium resources in Zimbabwe were exploited, the country’s share of global production would increase to 20%
Caption: FLASHBACK Zimbabwe’s President Emmerson Mnangagwa shakes hands with Prospect Resources chairperson Hugh Warner at the ground-breaking ceremony for the Arcadia project in December

When Robert Mugabe was forced to resign as Zimbabwe’s President in November 2017, the country had been estranged from much of the Western world for more than a decade, depriving it of much-needed investment and support from multilateral agencies. The consequences for the economy were dire: negative or sluggish growth, company closures, massive unemployment and a crippling cash shortage.

Against this background, the first order of business for Emmerson Mnangagwa, Mugabe’s successor, was to declare the country “open for business”. He moved fast to reverse a stipulation that capped foreign equity in a business or project at 49% – save for investments in the diamond and platinum mining sectors. However, in a clear indication that it is particularly keen on attracting foreign mining investors, the new administration announced in March that even these two sectors would be exempt from the so-called indigenisation provision.

That the post-Mugabe government appears to be prioritising the mining sector in its push to woo foreign investors is a no-brainer: Zimbabwe is a minerals treasure trove. Besides the world’s second-largest platinum group metals (PGMs) reserves after South Africa’s, it also hosts sizeable quantities of gold, chromite, coal, cobalt, copper, graphite, nickel, diamonds and lithium, besides others.

One of the investors that have responded positively to Mnangagwa’s charm offensive is Cyprus-based Karo Resources, which is developing a $4.2-billion mine that will produce 1.4-million tons of refined PGMs a year when it reaches steady-state production. Located on the Great Dyke – a 550-km-long geological formation that transects Zimbabwe in a north-north-easterly direction and also hosts PGMs mines owned by South Africa’s Impala Platinum and Anglo American Platinum – Karo’s new mine will comprise four openpits, the first of which is expected to start operations in 2020, with the second following suit in 2021 and the third and fourth coming on stream in 2022 and 2023 respectively.

Another megaproject, with a $4-billion price tag, is set to be developed on the Great Dyke by a company jointly owned by a Russian State-controlled enterprise, the Zimbabwe government and private- sector investors in the country, following the finalisation, in April, of a deal that had stalled since 2014.

Meanwhile, Mines and Mining Development Minister Winston Chitando revealed in April that two other PGMs projects would soon be unveiled. He declined to provide further details.

Zimbabwe’s platinum production grew at 2.63% a year over the past five years, coming in at 14.64 t in 2018, but, in light of current expansion projects and the influx of new players, government is targeting 50 t/y by 2030.

Zimbabwe has sufficient platinum resources to achieve this aspiration as, apart from the Great Dyke, there is potential for platinum mining elsewhere in the country, evidenced by the granting of 16 platinum exclusive prospective orders in the 1990s. But Lyman Mlambo, chairperson of the Institute of Mining Research at the University of Zimbabwe, in Harare, avers that much needs to be done to raise production to 50 t/y in the next 11 years. “We must create conditions that make it ‘greater’ business sense to invest in the Zimbabwe platinum sector than in other countries or other sectors,” he said in May, when he addressed delegates attending the Zimbabwe Annual Mining Conference, which was hosted by the Chamber of Mines of Zimbabwe (CoMZ).

Mlambo mentioned several key challenges, including the country’s poor performance in international investment rankings, which, while based on “perceptions [that] may not be accurate”, impacted on investment decision-making. Other major concerns were a platinum royalties regime based on gross sales instead of profit, thus obliging even marginal and lossmaking producers to pay royalties; a planned export tax on unrefined PGMs; shortages and high costs of electricity; dilapidated transport infrastructure; and inadequate foreign currency.

Mlambo also flagged limited opportunities for offshore lines of credit, owing to Zimbabwe’s high risk profile, coupled with inadequate local financing, as major hurdles for platinum miners. “The PGMs sector is currently operating at almost full capacity, which implies that growth to 50 t/y would be achieved only if adequate capital was attracted. The required capital for the sector over the next five years, for sustenance and ramp-up, stands at about $7-billion.”

The gold mining sector – which, together with the PGMs and tobacco sectors – is a key foreign currency earner for Zimbabwe, has also been earmarked as a pillar of the country’s economic revival. Gold mines’ capacity use stood at 72% in 2018, when they produced 35 t and generated revenue of $1.35-billion, compared with a low of $110-million in 2008. Mnangagwa’s government is convinced that the idle production capacity and extensive gold deposits in the country present an opportunity for output to increase to more than 100 t/y by 2023 and for revenue to exceed $4-billion a year.

Achieving this aspiration would require the injection of more than $1-billion to sustain operations and ramp production up, with 60% of the investment required by 2021. But, like their PGMs counterparts, gold producers say raising this sum will be an uphill task. “Government should mobilise affordable, long-term lines of credit for the gold industry to bridge the funding gap,” CoMZ Gold Producers Association chairperson T Gono states in a new document, titled ‘Maximising the potential of the gold industry’.

The Zimbabwe government has been highly sympathetic to the gold sector’s plight, having agreed to allow producers to retain 55% of their earnings in foreign currency and to reduce the maximum royalty payable by large-scale producers to 5%, with small-scale operators – who account for 60% of total output, compared with large-scale primary producers’ 33% and secondary producers’ 7% – paying only 1%.

But challenges linger for the gold sector, which accounts for 25% of formal mining-sector employment of about 40 000 and 18% of government revenue through corporate tax and other fiscal charges. These include a shortage of foreign currency for the import of capital goods and other essentials. “The 55% of foreign currency that we are [allowed] to retain falls short of the foreign exchange requirements of the gold industry, which range from 70% to 90% of proceeds,” Gono explains.

Zimbabwe’s gold mines are also reeling under a high cost structure, with the average all-in production cost of $1 080/oz the highest in the region. “A number of mines incur costs well above this average, with narrow-seam mines averaging $1 350/oz and heap-leachable deposits $1 300/oz. These mines are struggling to break even and some have already been placed under care and maintenance, while others are contemplating suspending operations.”

Power shortages are also a cause for concern for gold miners, as are the royalties of 3% to 5% levied on large-scale producers, which, while much lower than in previous years, are higher than the rates applicable elsewhere on the continent. In South Africa, for example, 3% and 1.5% are levied on unrefined and refined gold respectively, while producers in Senegal, Côte d’Ivoire, Mali and Ghana pay 3%, with producers in the Democratic Republic of Congo liable for 2%. It is only Burkina Faso and Tanzania that have similar gold royalty regimes to Zimbabwe’s: 3% to 5% and 4% respectively.

Despite the challenges facing the sector, foreign investors with gold assets in the country appear to have high hopes for a turnaround. One such investor is Canadian-owned Caledonia Mining, which has announced its intention to increase its stake in the century-old Blanket mine from 49% to 64%. Caledonia recently completed a $44-million shaft sinking project at the mine, which it started in 2015. The project has now moved into the equipping phase, with commissioning scheduled to start in the third quarter of 2020. Caledonia expects production at the mine to increase from 54 511 oz in 2018 to 56 000 oz this year and to 75 000 oz in 2021, once the new shaft has been fully commissioned.

In the diamond mining sector, Zimbabwe has been able to attract the likes of Russia’s Alrosa – the world’s largest diamond producer by volume – which concluded a deal to explore for and mine the precious stones in the country in July. “We are hoping that exploration will start in September. We see a lot of potential and we will invest more in the coming years, depending on the outcome of the exploration,” Alrosa CEO Sergey Ivanov said at the time.

Another new kid on Zimbabwe’s diamond mining block is Aim-listed Vast Resources, which announced in April that it had sold its gold interests in the country to concentrate on the development of its new partially owned diamond concession in Chiadzwa, in the east of the country.

Beyond precious metals – platinum, gold and diamonds – foreign direct investment is also set to flow into the industrial minerals sector, with Australian-listed junior Prospect Resources currently engaged in financing negotiations for its 87%-owned Arcadia lithium mine, near Harare, the capital city. According to a definitive feasibility study completed in November 2018, the mine, whose development will require $163-million, will produce 212 000 t/y of 6% spodumene, 216 000 t/y of 4% petalite and 188 000 lb/y of 25% tantalum in concentrate over the envisaged 12-year life-of-mine, generating cumulative revenue of $2.93-billion. Both spodumene and petalite are lithium- bearing concentrates.

About 34% of production for the first seven years is already under offtake with China’s Sinomine and its subsidiary, Dongpeng, the Asian country’s largest petalite chemical converter.

A special economic zone was declared over the project area in February, affording the mine significant concessions, including the right to operate exclusively in foreign currency.

Zimbabwe accounts for a tiny fraction of the world’s lithium, used mostly in electric vehicle batteries, but Chitando said in February, when he addressed the Investing in African Mining Indaba, in Cape Town, that, should all known resources in the country be exploited, the country’s share of global production could increase to 20% – an achievable target indeed, but only if the challenges of inadequate foreign currency, an uncompetitive fiscal regime, a high country risk profile and inadequate electricity supply could be addressed.