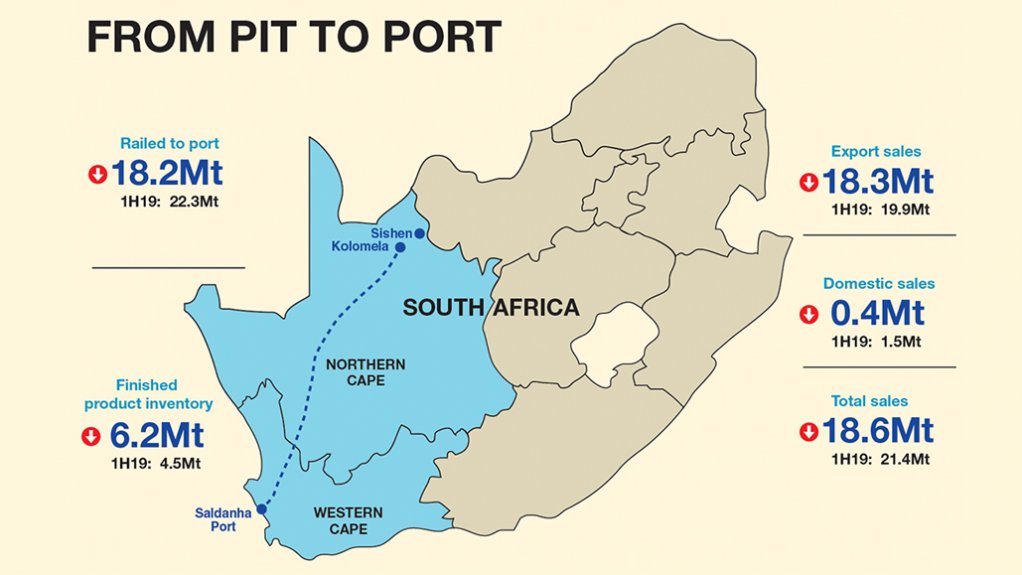 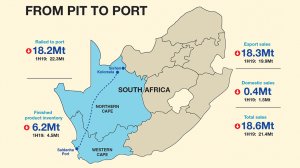 Illustrated is Kumba Iron Ore's pit-to-port performance in the six months to June 30.

JOHANNESBURG (miningweely.com) – The flight to iron-ore quality, driven by environmental concerns and the need for cleaner production and less air pollution, is a demand trend that favours South Africa’s high quality iron-ore.

That is the view of Kumba Iron Ore executive head marketing and seaborne logistics Timo Smit, who was responding to Mining Weekly’s questions at the media conference that followed Kumba’s presentation of half-year results.

In the half-year, Kumba realised an average iron-ore export price of $93/t, against the background of the Platts 62% IODEX cost and freight China index averaging $91/dmt during the first-half of the year, after surging 23% in the second quarter.

Following disruptions caused by the Covid-19 pandemic, economic stimulus measures in China have fuelled a strong recovery within the infrastructure and property sectors, which has driven up demand.

Kumba’s break-even price increased to $42/t, $10/t above that for the comparative period owing to $16/t lower price and lump premia, and $3/t from increased cost inflation. This was partially offset by $8/t from a weaker currency, lower freight rates and increased royalties, as well as $1/t from lower mining volumes and cost savings. Kumba's high-quality products delivered an additional $13.2/t in lump and iron premia in the half-year.

Elaborating in response to questions, Smit said that the flight to quality worked very much in South Africa’s favour because of Kumba’s a high-quality niche-products portfolio.

“It also works in Brazil’s favour,” he added. “Brazil’s qualities and South Africa’s qualities tend to be a bit higher than what we’re seeing out of Australia. Longer term, that flight to quality will support 62 to 65 differentials high-grade  premia.

“We’re expecting to see longer-term $16 there, above 20% of the Platts 62 index. That will continue to play in our favour. Right now, we haven’t seen that premium. Right now, steel mills outside of China are very much in survival mode.

“That will kick in longer term, while in the short term, there’s pressure on the premia. That is also driven, by the way, by the pressure that we’re seeing generally with steel margins,” Smit noted.

Though the steel market in China has been developing inordinately, at a time of high iron-ore prices, that has not necessarily translated into high steel-mill margins: “And when mill margins are under pressure, we typically also see pressure on the quality premium. So, that’s what we’re seeing right now. But those are short-term effects. Longer term, we believe that the flight to quality will underpin high-grade premia,” Smit reiterated.

Kumba CEO Themba Mkhwanazi concurred and added that from a macro perspective, the bigger price drivers were not necessarily going to be the current trade defences of sovereign States, but rather emission reduction efforts.

“Again, from our perspective, we’re well placed, given the fact that the quality of our product bodes well for their use as direct charge ores, which are quite critical in terms of emission reduction.

“The other point as well that I’d also like to make is the advantage of our geographical positioning. Whilst we may be far from China, and some of the end-user markets, we’re able to service both the Far East and also Europe, and we’re technically equidistant, so we have that flexibility,” Mkhwanazi pointed out.

Geographical positioning is key differentiator, and in Kumba’s case, it ticks all the resilience boxes.

Iron-ore prices are expected to come down in the longer term. The prices being fetched now are seen as being exceptional, brought about by global supply disruption from inclement weather conditions in Brazil and Covid-19 restrictions in several countries, providing further price support.

“There’s been an exceptional combination of strong Chinese demand on the back of the property and infrastructure sectors, as well as supply constraints at the same time,” said Smit.

“Longer term, we should see prices come back down a bit. On the one hand, supply should pick up from Brazil, putting a little bit of pressure on prices, and China cannot continue to grow forever, at least that’s what people are thinking.

“Then, also longer term, what’s going to be important is that steel production isn’t just going to be blast furnace based but we’ll see electric arc furnaces pick up, the scrap cycle kicking in, which will mean steel will be produced not from virgin iron-ore any longer but from scrap instead.

“So, we should be seeing lower prices in the longer term, but still at a healthy level, nonetheless,” Smit said.

On some of the political unease between Australia and China, he added: “We’ll have to see how that plays out, but Australia is simply too important a producer of iron-ore in the overall scheme of things. China simply cannot go without Australian ore. Even Brazil, as big as it is in iron-ore, cannot fill China’s iron-ore need on its own. Australia will have to be a key player, no matter what.

“But there have been some interesting developments, of course. Just this past week there were announcements made that a further four ports in China will be able to handle Valemax carriers, the very large  400 000 t carriers that deliver iron-ore to China from Brazil,” Smit said.

The vessels are some of the largest ships ever built and were designed to help reduce the cost of shipping ore to China from Brazil, helping Vale better compete with Australian rivals who are closer to the largest market for the steelmaking ingredient.

“Clearly, that’s another avenue for Brazil to regain some market share in China, so that’s definitely an important development, but despite that, Australia is too large a player in the overall scheme of things and China simply cannot do without it,” Smit emphasised.

Owing to Transnet’s logistical capacity being limited to 80%, iron-ore railed to port decreased by 18.4% to 18.2-million tonnes from 22.3-million tonnes.

Maintaining flexibility across the value chain, from pit to port, is therefore essential to ensure that Kumba had the right quality and quantity of buffer stocks.

Additionally, Kumba, along with industry peers and Transnet, work together to ensure optimal use of the rail network and port.

Initiatives are under way to provide training support and increase the number of operators available to supplement the vulnerable staff members unable to work owing to the Covid-19 pandemic.

Total volume shipped for the period declined by 8% to 18.4-million tonnes, compared with 19.9-million tonnes in the first six months of last year, owing to Covid-induced port constraints plus an increase in severe coastal weather conditions preventing ships from berthing at the Saldanha port.

To mitigate these risks, optimal levels of finished stock are being maintained at the port, and direct loading from rail to ship has increased as well as double loading to improve Kumba’s loading rates further.

The company’s integrated sales and operational teams ensure that its value chain remains flexible, with the right quality and quantity of buffer stocks across the chain. A joint industry and Transnet management team has been established to manage capacity and optimise the logistics system.

Both production and sales are closely managed in line with Transnet’s logistical capacity, which increased to 80% in June. As a result, total production was 11% lower at 17.9-million tonnes, relative to the 20.1-million tonnes delivered in the same period in 2019.

Full year 2020 guidance was revised on April 23 together with Kumba’s Covid response update. With operational performance now in line with expectations, total sales of 38-million tonnes to 40-million tonnes are being guided.