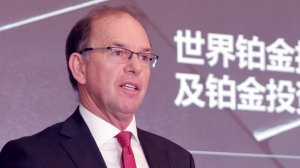 JOHANNESBURG (miningweekly.com) – Extremely strong demand for platinum bar and coin is being seen around the world, particularly in the US, along with growth in demand for platinum exchange traded funds (ETFs), mainly out of North America and Europe, World Platinum Investment Council (WPIC) head of research Trevor Raymond said on Thursday.

“On investment demand, we can certainly see the growth in ETFs and how those ETFs have been growing.

“We also have a lot of partners around the world, and particularly in the US, and we talk to our partners, and they’ve been seeing extremely strong demand for bar and coin.

“Another indicator we have is a significant increase in the exports of those physical products between Switzerland and the US year to date. In fact they are up by over 250% to about 216 000 oz.

“It appears that particularly a retail investor in the US still has a strong appetite for hard assets, anything other than US equities. They certainly own a lot of gold and silver. But most definitely the demand for platinum is still significantly up on previous years,” said Raymond.

There is also a likelihood of hybrid vehicles having to be part of the power train mix together, meaning that there will be a lot more gasoline and diesel hybrids for a lot longer with that demand growth being slowly factored back in.

A constantly increasing number of hydrogen fuel cell heavy-duty vehicles and medium-sized vehicles are also being developed and built for municipal applications in China.

Mining Weekly: Could you give us some insight into hydrogen economy uptake in Europe?

Raymond: The hydrogen economy is more global than just Europe. Europe has published its hydrogen strategy, and there they are committing to produce about 40 GW of green hydrogen by 2030. Europe has a lot of plans and the Biden administration committed to the Paris climate accord in its first week in office. Certainly, the amount of fiscal stimulus that’s going into the hydrogen economy is quite remarkable. What we see that doing is reducing the cost of producing hydrogen and making hydrogen an attractive alternate to fossil fuels. In terms of developments, yes, a lot is happening in Europe, particularly Switzerland. We have heavy-duty trucks delivering goods in Switzerland and they've done over a million kilometres already with that project. It’s 140 vehicles initially, growing to 1 400 vehicles. So, that’s going very well. But the main news flow on the hydrogen economy development is coming out of China. There is significant news flow of continuously more and more heavy-duty vehicles and medium-sized vehicles in municipal applications being developed in China and being built. It’s very good news for that rollout. On the other side of the hydrogen economy is the generation of green hydrogen, where the proton electrolyte membrane (PEM) fuel cell and then the PEM electrolyser that converts water into hydrogen is the preferred technology. It’s more efficient and also has some advantages with variable power generation that comes from wind and from solar. So, significantly more interest in the platinum-based production of green hydrogen. That, combined with platinum’s use in PEM fuel cells, certainly provides short-, medium- and long-term demand growth.

Mining Weekly: How is the substitution of platinum for palladium going in petrol vehicles?

Raymond: Again, it’s been a real struggle for us. We’ve been quite convinced that that substitution has been happening since 2018. In 2020, Johnson Matthey confirmed they were putting on units that must have been developed in the year or two prior to that. But the news flow has been very limited from the manufacturers of catalysts and also from the auto makers. What we have seen more recently is BASF has been more vocal. Some of the others have mentioned it but are trying to make it less profound. But Sibanye-Stillwater, who partnered with BASF, has been a lot more detailed in their statements. Initially, they were talking around 100 000 oz to 150 000 oz this year, and growing to 1.5-million ounces in 2025. They have increased that. They certainly believe that there is about 200 000 oz of demand for platinum substituting palladium in gasoline engines this year and  they’ve increased their target to between 1.5-million ounces and 1.7 -million ounces in four years’ time. That demand growth is quite profound, particularly in the face of constrained supply.

Mining Weekly: What are the main drivers of platinum demand going forward?

Raymond: Substitution is certainly the most significant and material demand growth that we’ve seen in the six years that we’ve been doing what we do, and that is to try to give investors more information to make informed investment decisions. That demand growth in terms of substitution is quite huge, 1.7-million ounces of extra demand on an eight-million ounce market, that really is material. The other thing strong is industrial demand. As the fiscal stimulus packages around the world come out, people are trying to basically spend money on building infrastructure to try and dig themselves out of the Covid hole. All of that infrastructure certainly does rely on industrial metals and platinum is certainly part of that. Glass production, chemical production. That all seems to be increasing demand and we’ll have a better read on that in September. Just in general the platinum group metals are all in demand. The issue is around whether it will be possible to switch to 100% electric vehicles within ten years. That seems to be increasingly unlikely.

We are waiting for a pronouncement on Euro 7 emission. There certainly has been a recent ruling on collusion so I think there is a likelihood that hybrid vehicles will have to be part of the power train mix together with electric and the electric will be battery as well as fuel cell. That hybrid means that there will be a lot more gasoline and diesel hybrids for a lot longer and that demand growth is being slowly factored back in. We are between publications but we certainly do get the news flow from production and production remains constrained. We know Anglo American Platinum is doing well at processing some of the ACP material. But certainly the impact of Covid on their operations and other operations seems to be keeping supply constrained, and the projects that are being considered at the moment certainly have three- or four-year lead times. That investment case for platinum ­is being taken up. What we’ve seen in the first six months of the year is that there have been more than 200 000 oz of demand in platinum ETFs, mainly out of North America and Europe. Even though there has been some selling in Asia and a little bit in South Africa, the total year to date is still up 130 000 oz, on top of all those important bars and coins. That investment demand is extremely strong. The market is tight. We’ve seen a big spike in the lease rates, which has been incredibly unusual over the last eight or nine years. So, there seems to be slightly less availability of platinum. Certainly, a lot more going into Chinese heavy duty trucks as well as substitution. A combination of significant demand growth and constrained supply, and right now far less availability than people might think.