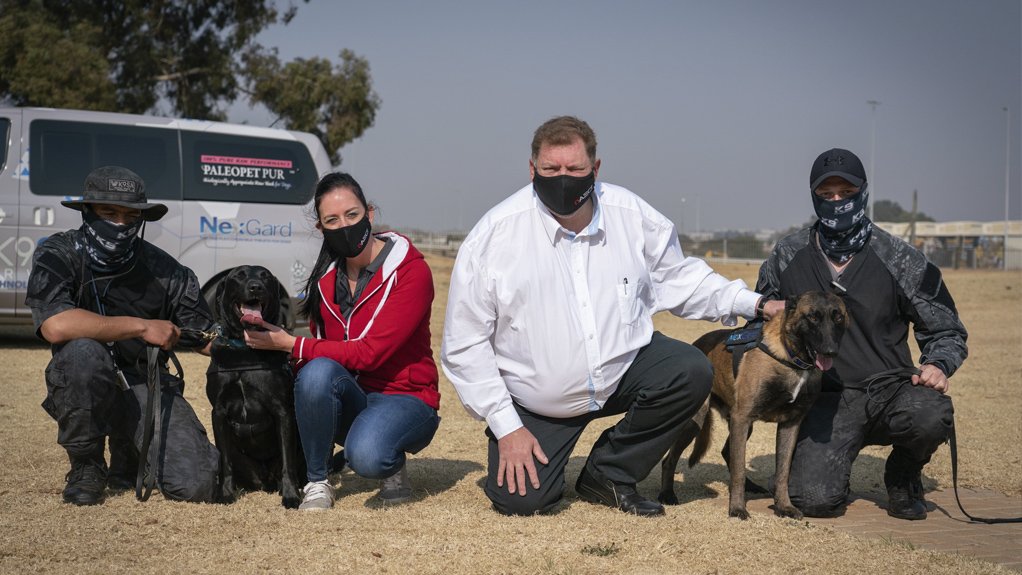 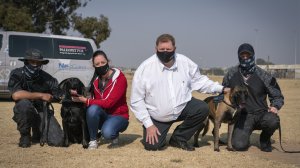 To promote the fight against the illegal use of explosives, commercial explosives supplier AECI Mining Explosives has partnered with private-sector canine programme Vapor Wake K9 South Africa (VWK9SA) by providing explosives samples to assist in the training of its dogs.

Criminal activities that involve the use of illicit explosives in South Africa, especially cash-in-transit (CIT) heists and ATM bombings, have been on the rise and have been dubbed a national emergency.

At least one CIT heist a day was recorded between January and mid-February this year. Although there was a complete lull in the number of CIT cases recorded during the hard lockdown, from March 27 to May 1, there has been a dramatic increase in CIT robberies following the relaxation of lockdown regulations.

Meanwhile, terrorist attacks using explosives endanger public safety on a large scale and can severely impact on the economic and political stability of any country. The fast detection of explosives from the vapour phase would be one way to enhance the protection of society against terrorist attacks.

VWK9SA owner Brad Wood explains that the teams, consisting of South African Civil Aviation Authority- (SACAA-) certified dogs and handlers, are the most effective counter-measures available for the detection of explosives. These teams are experts in conducting searches for various explosive materials in the vicinity of numerous assigned facilities.

“[Our] teams play a critical role in comprehensive preventive security measures, by supporting strategic explosive detection activities. They also provide immediate and specialised responses to bomb threats where unattended packages at airports, for example, or other dangerous items are detected,” says Wood.

He commends AECI Mining Explosives for the provision of samples of commercial explosives that are crucial in the training of dogs.

“AECI’s involvement in this initiative goes a long way in strengthening our training regime, which is really important in fulfilling our mandate.”

AECI Mining marketing manager Michelle le Roux is impressed by the work being done by the VWK9SA team and its dogs.

“It’s really a passion for them and they treat these dogs like family. The dogs are heroes with a nose, and we commend them for sniffing illicit explosives out of communities,” she says.

AECI Mining Explosives risk and safety manager Christo Peltz explains that the products supplied by the company range from pyrotechnics to propellants and various other types of high-impact explosives. However, there are plans to supply noncommercially available compounds as well.

“We are not only supplying popular commercial explosives but have also undertaken to prepare explosive compounds in a registered explosives laboratory.”

This is considerably important as the materials used in terror attacks, for example, are sometimes prepared in illegal basement and/or backyard operations and could be inherently unstable and are, therefore, not available commercially.

“We can produce these energetic materials in a licensed, controlled and safe manner, and provide small, safe amounts, and legally dispose of them once their purpose is served,” notes Peltz.

The amounts required for training of the dogs are relatively small. A few grams of each material is sufficient, explains Peltz.

VWK9SA is fully accredited with the Safety and Security Sector Education and Training Authority, the SAPS Explosives Section and the SACAA.

Through its Zero Harm campaign, AECI Mining aspires “to operate sustainably, without harm to people, the environment and the communities in which we operate”.

“As a supplier of explosives, we believe there is a social responsibility to assist initiatives that work to keep the community safe from the illegal use of explosives. Collaboration with VWK9SA is a natural flow from this philosophy,” concludes Peltz.