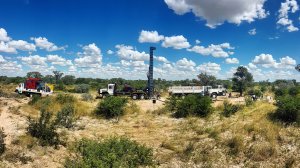 Botswana Diamonds is involved in joint ventures (JVs) with companies in the mining industry in Botswana. These include the Maibwe JV and, until recently, a JV with with Russian diamond company Alrosa, says Botswana Diamonds MD James Campbell.

He elaborates that for the Maibwe project, drilling was completed close to Gem Diamonds’ Ghaghoo diamond mine in the central Kalahari.

The Maibwe project is a JV company owned by Bamangwato Concessions (51%), mine and exploration of minerals and metals company Future Minerals (20%) and mineral company Siseko Minerals (29%). Siseko is 51%-owned by Botswana Diamonds.

Campbell says Bamangwato Concessions is in liquidation and unable to finance an agreed work programme.

Botswana Diamonds has a 15% carry-through to a bankable feasibility study, where ten licences are held by the Maibwe project in the Gope area.

A drilling programme in 2015 on PL 186 resulted in the discovery of kimberlites containing significant quantities of microdiamonds. Botswana Diamonds has drilled verification holes and analysis is ongoing, Campbell notes.

Meanwhile, fieldwork started with Alrosa in April 2017 in the Orapa and Gope regions.

Botswana Diamonds previously held a 50:50 JV with Alrosa on ten blocks - seven in Orapa and three in the Gope regions - and is currently in discussions with a major producer to step into the shoes of Alrosa.