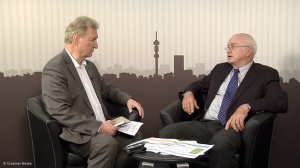 JOHANNESBURG (miningweekly.com) – Unless South Africa starts exploring again and finds new ore deposits, the country will continue to turn out the lights of the mining sector.

With poor policy added, disinvestment and lack of interest will ultimately stop South Africa’s mining industry in its tracks, which will deal a colossal blow to the South African economy.

“We need the leadership to look at where we take this industry, and it’s a resources industry and not just mining. We need to go back to the value curve and we need to go and work on the front of the value curve, which is exploring and finding new orebodies,” said Bristow, who added that South Africa could emulate many global models, not the least being that of Peru.

Exploration expenditure in Peru grew to $151.8-million in the first half of the year, a 28% increase compared to the same period in 2016. Exploration in Peru is reactivating as pricing for key commodities such as zinc and copper increase.

Required is a combination of exploration, development and mining, helped by enabling policy.

Instead, South African mining is on a downward trajectory because the legislative framework is frightening away investment.

Local companies with expertise, though domiciled in South Africa, are doing much of their work outside of the country.

The enabling policy needs to be tailor made for all the different facets of  the value curve, there has to be easy, transparent access to mineral rights and the mapping of the country needs to be resumed using state-of-the-art techniques.

Leading on from that, the industry needs to transform and support the ingress of educated entrants and owners.

“We can fix this business, but it needs leadership, passion and a vision, which we don’t have at present,” said Bristow, who is credited with co-developing a unique micromineral (perovskite) age-dating technique at the Research School of Earth Science (RSES), Australian National University, Canberra, with Hugh Allsopp of the Bernard Price Institute, of the University of the Witwatersrand, and RSES's Bill Compston in the 1980s, courtesy of De Beers.

In an interview with Mining Weekly Online, De Beers Consolidated Mines CEO Philip Barton last week stated that South Africa continues to have two significant plusses going for it, the first being that it remains highly prospective and the second that it is still underexplored.

“We haven’t covered a fraction of South Africa yet from a diamond exploration perspective,” Barton commented.

Another big bonus is new technology, which is creating far-reaching new potential.

Unsurprisingly, De Beers has a lot of data to which new technologies and new knowledge can be applied that will result in discovery that benefits the South African economy and creates jobs.

But for now, De Beers is cutting its South African exploration budget to zero from its previous levels of R30-million and R40-million a year owing to the hold-up by the Department of Mineral Resources (DMR) of 54 of its prospecting licence applications for as long as two years.

Many are also decrying the inefficiency of the DMR’s mineral rights management system and emphasising the need for South Africa to be re-explored from first principles.

Efficient mineral rights assessment is seen as a potential significant stimulator of South Africa’s entrepreneurial spirit, which many believe would be optimised though enabling policy and a mineral rights management system to match systems in widespread use in virtually all mining jurisdictions.

Chile has a mining model that integrates small and big private mining companies as well as State mining corporations.

Even Argentina expects exploration activities to rise by 2% in 2017, stimulated by mostly Canadian and Australian input.

The 47 mining projects under way in Peru have a combined value of $49.5-billion, with 24 of them being advanced stage exploration projects.

Exploration in the South American country is expected to receive a boost in the second half following the implementation of new regulations aimed at improving exploration conditions, such as speeding up the permitting process.

The new set of rules will shorten permit approval times, leading to a more dynamic flow of exploration.
“We’ve got lawyers that could write a new charter and a policy in weeks when you consider the expertise of the lawyers and mining companies,” Bristow commented to Mining Weekly Online.