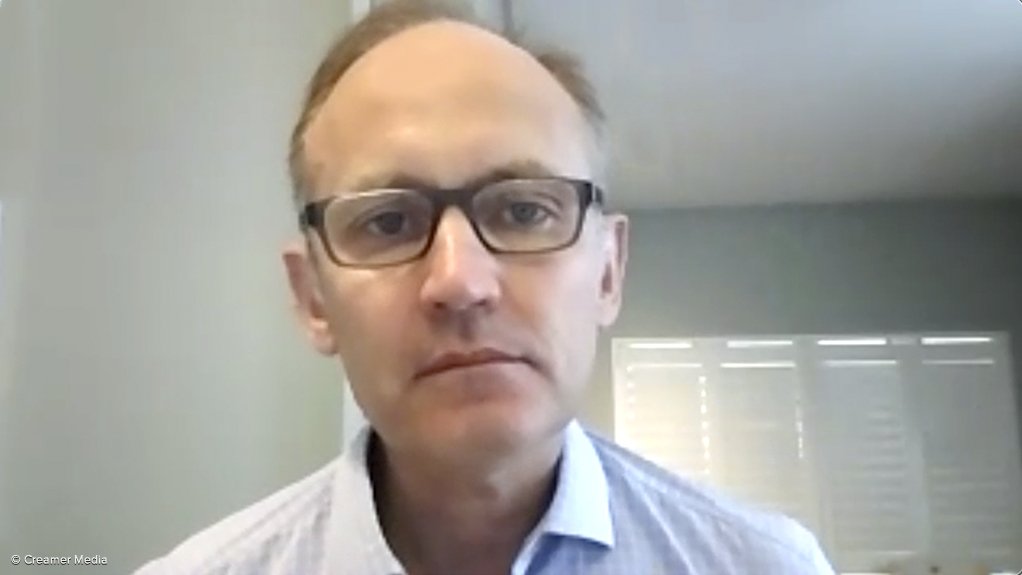 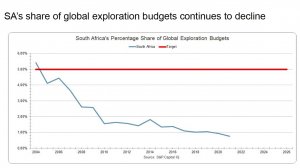 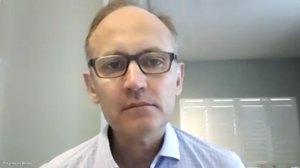 JOHANNESBURG (miningweekly.com) – Because of the collapse of investment in greenfields exploration in South Africa, any mining graduate entering the profession today can expect to be unemployed from the age of 40, said AmaranthCX director and founder Paul Miller on Monday, when he pointed out that South Africa is now at an all-time exploration low of 0.76% of global exploration spend.

Miller warned that with the global standard of taking a tier 1 deposit from discovery to full production being between ten and 20 years, South Africa would likely have fewer than ten long-life operating mines in the next couple of decades.

He could thus not recommend to any 18-year-old in South Africa, who wanted to remain employed in mining past the age of 40, to enter the mining industry – ­ “not until we see significant additional investment in upfront greenfields exploration, and there’s nothing in our policy environment that suggests it’s going to happen”, he added.

“A mining industry, by definition, is a declining industry. Every mine, on the day it opens, is in decline until the day it closes, and the only way of sustaining the industry is through exploration, discovery of new deposits and building new mines to replace those that have been mined out.

“We know, from the statistics, that exploration spending in South Africa has collapsed. Inevitably, that means that in ten to 20 years only the very longest life mines will still be operating. The rest are going to close. There’s nothing to replace them,” said Miller, who advocated in a recent opinion piece that existing legislation and policy needed to be:

Only then, he stated, would South Africa have any chance of reaching the target set by Mineral Resources and Energy Minister Gwede Mantashe of attracting 5% of global exploration expenditure in five years.

South Africa was, meanwhile, lagging very badly behind other mining jurisdictions, which were poised to attract orders of magnitude more investment in exploration in 2021, with:

“To give you some perspective, if we were to attract 5% of global exploration, we would have to attract between R6.5-billion and R8.5-billion a year in exploration spending but we’re doing just more than R1-billion at the moment, so it's a sixfold increase that we would require in our current exploration spending. The question is what actions were taken between when the Minister set the target and two-and-a-half-years later, which is halfway to the target, and I’m afraid, I haven’t seen any at all,” said Miller.

Mining Weekly: Why is it that our neighbours Botswana and Namibia are continuing to knock South Africa into a cocked hat when it comes to attracting exploration investment?

Miller: These countries, as geologically endowed as they are, have tiny populations. They have tiny economies and yet, collectively, Botswana and Namibia now attract more exploration budgets than South Africa does, with its vastly bigger mining industry. In fact the number is around $10-million more exploration budgets than South Africa attracts. Botswana allows explorers who discover deposits to own 100% of the asset and they have had a policy over many decades of retaining geological data at the relinquishment of a prospecting licence and then making that data available to newcomers. What you see is this cumulative effect of more and more data – knowledge generated by every explorer – being reinvested in the country’s geological endowment, and then used again. For example, De Beers has done decades of exploration in Botswana for diamonds but that geophysical data is available to the next party, who might want to look for base metals, for example. They’ve cumulatively over time gathered all that information. Likewise Namibia, and in Namibia if you don’t spend money on your prospecting right, you lose your prospecting right, and that’s not something that happens in South Africa. In South Africa, we routinely issue prospecting rights to parties who do not have either the money or the skills and experience to implement the prospecting right and then they hold that prospecting right, initially for eight years, and then on a never-ending renewal process. So we are not reinvesting in our geological endowment, we are not generating knowledge and we are not turning the properties over. That’s a quick summary why I think Namibia and Botswana are deservedly doing much better than the much bigger South African mining industry.

Mining Weekly: What must South Africa do to reverse this hugely negative downward trend?

Miller: First of all, if we set a target in 2019 to achieve something in five years, we shouldn’t then in 2020 repeat the same target. The Minister said in 2019 that in three to five years we would aim to attract 5% of global expenditure on exploration. We should not then walk the target forward and in October this year repeat the target of attracting 5% of global expenditure in five years. It’s not a target if it keeps getting walked forward. Will we say again next year that we want to achieve 5% in five years and take no action? You’ve got to reform a broken system. We’ve gone from 5%  of global exploration to below 1%. We’ve gone from 35% of African exploration to less than 8% of African exploration. What it says is that grand compromise between big miners, big government and big labour, the original Mineral and Petroleum Resources Development Act (MPRDA) and the original Mining Charter, had no voice in the debate for explorers, nor for mines that had not yet been built. Now, after all these years, we realise that the MPRDA and the Charter do not make South Africa a competitive environment to attract exploration spending. The statistics are there, not only S&P Capital IQ statistics, that just shows a year-on-year decline to the 0.76% of global exploration budget now. But the South African Reserve Bank’s own data shows that South African companies are spending less on mineral exploration and evaluation than at any time since 1994. I don’t know what more evidence you need to say that the MPRDA and the Charter fail to attract exploration investment. We can have big debates about where funding should come from but the fact is you’ve got to compete for funding and we’ve got to take it from approximately R1.5-billion to about R8-billion. Government can crack investment funds of R100-million here or there, but it’s a rounding error in an effort to go from R1.5-billion to about R8-billion and spending.

Mining Weekly: Where will South African mining end up if this trend is not reversed?

Miller: I’ve often asked that very question to rooms full of experienced mining people. I ask them how many long-life mines that currently operate will still be operating in 15 years’ time and generally everyone can think of a few. I mean Mogalakwena, Amandelbult, Venetia clearly will be operating and remember we have about 400 to 500 commercial non-industrial minerals mines. If we start counting them up, I’ve not yet met anyone who off the top of the head can identify with all the fingers on their hands more than ten mines that will still be operating ten or 20 years into the future. We also know that the global standard of taking that tier 1 deposit from discovery to full production is between ten and 20 years. So, what will we have in ten or 20 years? Well, we’ll have fewer long-life operating mines than the fingers on my hands.

The Department of Mineral Resources and Energy informed Parliament earlier this year that it had a backlog of more than 5 000 applications for mining and prospecting rights and renewals and cessions of rights.

Regional offices of the department, which continue to have paper-based processes, have in the past reported being without basic office supplies like paper and printer toner. Moreover, the now 11-year-old Samrad administrative system is severely criticised and a tender for a new system has not yet resulted in a new acceptable cadastre system being installed.