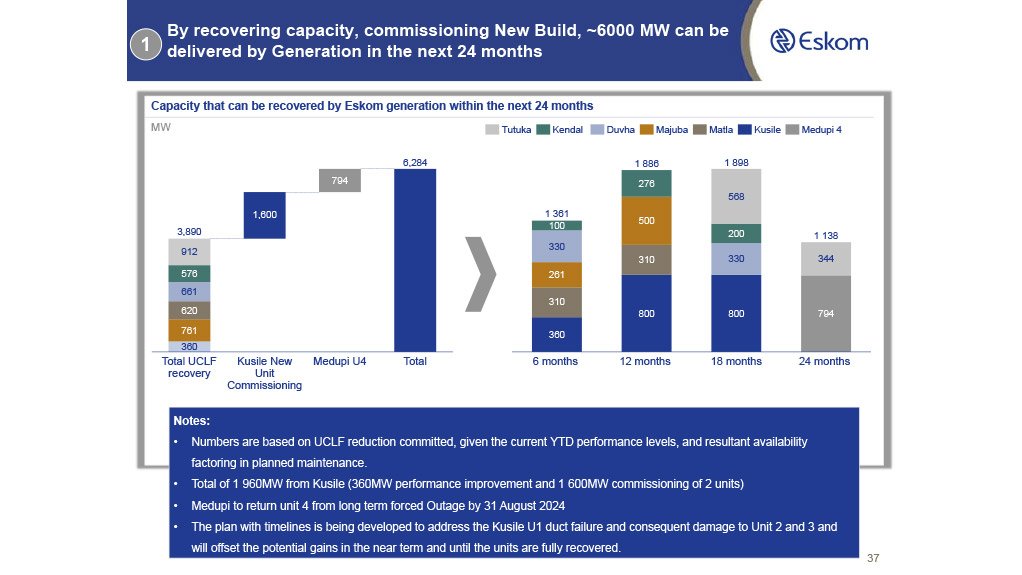 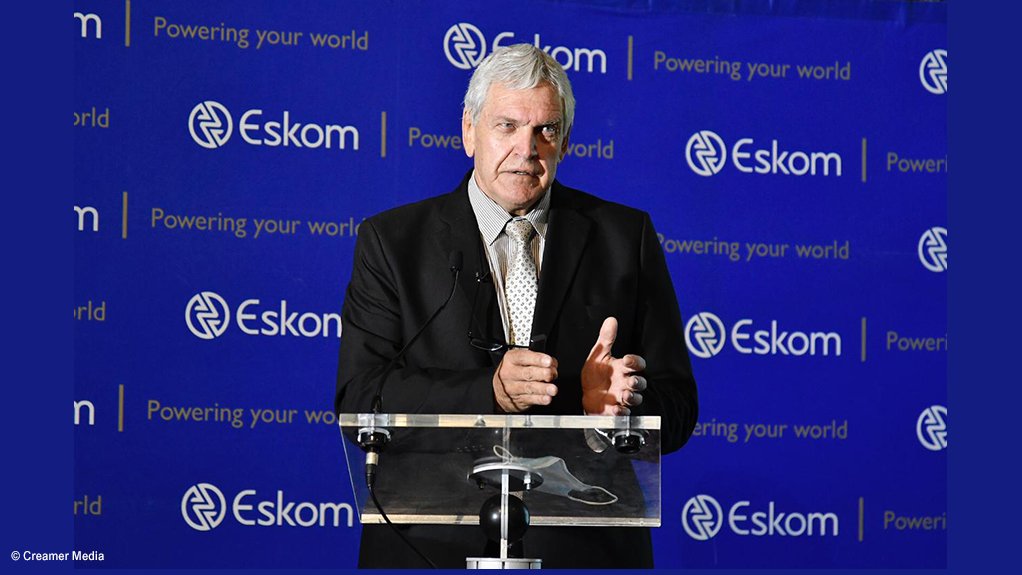 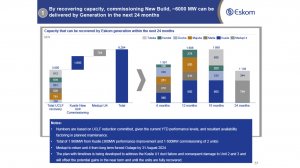 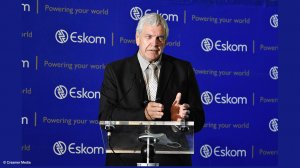 Electricity utility Eskom has outlined a plan to deliver 6 000 MW of much-needed capacity over the coming two years from its own fleet, primarily by recovering production at six underperforming coal stations and also by completing its much-delayed build programme.

However, the utility again stressed the need for between 4 000 MW and 6 000 MW of non-Eskom supply to help stabilise the loadshedding-prone system and to provide its generation division with the time and space required to implement maintenance across its neglected coal stations.

These stations had not only been severely undermaintained but were still being run extremely hard, with Eskom confirming that the energy utilisation factor (EUF) across its coal fleet stood at above 90% year-to-date.

This high EUF was contributing to the high levels of unit breakdowns, with Eskom suggesting that an EUF of between 60% and 70% would be more appropriate and sustainable for its aged fleet. Given intensifying loadshedding, however, such an EUF was unlikely in the near term.

COO Jan Oberholzer admitted during a system briefing that the recovery initiatives would not be sufficient to meet the new board’s target of recovering the generation fleet’s energy availability factor (EAF) to 75%; a target which Oberholzer called “daunting”.

Several commentators have described the target as inappropriate and have urged the board and the shareholder to, instead, support Eskom in ensuring that new private generation capacity was added urgently.

Delivering the briefing against the backdrop of ongoing loadshedding, which had impacted 155 days between January 1 and November 11, Oberholzer said that the board’s 75% “challenge” had been accepted, while adding that no definite deadline could be provided for achieving the goal.

The year-to-date EAF for the full Eskom fleet stood at 58.53%, its lowest level yet and well below the utility’s target, while the coal-fleet-only EAF had slumped to 53.9% on the back of high levels of full and partial load losses and a rise in planned maintenance.

Acting generation MD Thomas Conradie reported that specific maintenance attention was currently being given to Tutuka, Kendal, Duvha, Majuba and Kusile, which were seen as having the highest potential for recovery.

The newly-built Medupi power station was also still included in the group of six priority stations, despite its performance having already recovered strongly, with its five producing units said to be operating at an EAF of about 90%.

Medupi Unit 4, however, remained out of service after its generator was damaged catastrophically in a hydrogen explosion, which occurred on August 8, 2021. Eskom expects that the unit will be returned to service only during August 2024.

Conradie said the priority being given to the stations was expected to result in 3 890 MW being recovered by reducing the risk of unplanned outages, while another 2 394 MW would be added over the coming two years from the completion of Kusile and the rebuilding of Medupi Unit 4.

Over the coming 12-month period, Eskom expected its interventions to have recovered about 3 200 MW and, thus, expressed the need for new non-Eskom capacity to be added urgently in parallel.

Conradie presented the update on the generation division’s performance following the resignation of the acting generation MD Rhulani Mathebula, who himself stepped in to replace Phillip Dukashe, who resigned in May.

Oberholzer expressed regret at Mathebula’s resignation, precipitated by the extreme pressure associated with the position, which had placed strain on both Mathebula’s health and his family life.

Given the ongoing breakdowns across the coal fleet, Eskom had resorted to the extensive use of both its own diesel-fuelled open-cycle gas turbines (OCGTs), as well as the two operated by independent power producers, to partially cover the shortfall.

It was operating its Ankerlig and Gourikwa OCGTs at a load factor of 17.5% and had spent more than R12-billion between April and November against a budget for the year of R6.1-billion. In addition, the private OCGT plants had been operating at a load factor of 11% at a cost of nearly R6-billion year-to-date.

Oberholzer said Eskom did not have the financial resources to continue spending on diesel and indicated that loadshedding was likely to be deployed more intensively as a result.

“There has been no policy decision [not to burn diesel], it’s just that as Eskom we do not have any more money,” he said, adding that he could not offer precise insight into what it would mean for loadshedding, as it would depend largely on how other components of the system were performing.

He did confirm, however, that upcoming extended maintenance at the Koeberg nuclear station would increase the risk of power cuts, with Unit 1 set to be taken down for between 180 to 200 days from December 8 for extended refuelling and maintenance, including the replacement of its three steam generators.

Unit 2, which was meant to have its steam generators replaced this year, but saw the project abandoned as a result of a lack of preparedness by Eskom, would undergo a similarly protracted period of maintenance towards the end of 2023.

Therefore, the outlook for loadshedding remained precarious into next year, with Transmission MD Segomoco Scheppers reaffirming the summer outlook presented to lawmakers in October, which pointed to a steep escalation in rotational cuts every time unplanned outages exceeded 13 000 MW.

He noted that the threshold had already been breached for more than 23% of the time since the start of September, when outages had averaged above 15 000 MW during evening peaks.

The early prognosis for the coming winter months, starting in May, was equally precarious.

Scheppers also reported that more than half of the 155 days of loadshedding from January 1 to November 11 had been implemented at Stage 3 or above, with Stage 6 having been implemented on six days during the calendar year.