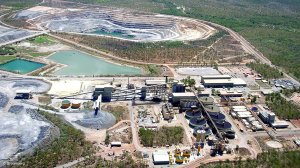 PERTH (miningweekly.com) – Mining major Rio Tinto has trashed an independent valuation report of uranium miner Energy Resources of Australia (ERA), saying it failed to recognise the long-standing opposition to the development of the Jabiluka uranium deposit.

ERA’s Independent Board Committee (IBC) engaged an independent valuation expert to determine a fair value for the company after it failed to get shareholder support for a non-underwritten, renounceable entitlement offer to raise some A$300-million in interim funding for rehabilitation work on an optimised basis, until the end of 2023.

The IBC had proposed pricing the interim entitlement offer at between 10% to 15% discount to ERA’s prevailing share price.

Rio, which holds an 86.33% interest in the company, was unwilling to take part in the scheme at the price suggested, arguing that further investment into ERA was unlikely to generate financial returns, given that the funding would be used for rehabilitation work and that the offer price of any interim raising should reflect fair value to that expectation.

ERA on September 26 released the independent expert report, which valued ERA shares at between A$0.159 and A$0.243 a share, with a mid-point valuation of A$0.201 a share.

However, the valuation report was based on the development of the Jabiluka deposit, which is located on the Jabiluka mineral lease, and contains some 302-million pounds of uranium oxide at an average grade of 0.55%.

A long-term care and maintenance agreement was entered into with the Aboriginal Mirrar Traditional Owners in 2005, who are the custodians of the land, and a key condition of this agreement is that ERA is prohibited from mining at Jabiluka without the approval of the Traditional Owners, who are currently publicly opposed to the development of the deposit.

In response to the valuation report, the Mirrar Traditional Owners put out a statement saying they were ‘appalled’ by the report, saying the Jabiluka site was of ‘enormous cultural heritage significance’.

The site contains extensive rock art galleries of World Heritage significance and the ore body itself is associated with a complex of sites known as the Boyweg-Almudj Sacred Site Complex. The site is also the location of the 65 000-year-old Madjedbebe archaeological site, Australia’s oldest human occupation site.

“It seems nobody has learned anything from the Juukan Gorge disaster. I’ve been telling the world about the sacred sites for forty years and still they don’t listen. We have said “no” and “no means no”. I stood up with my family and with people from everywhere, all over the world, we all said no,” Senior Traditional Owner Yvonne Margarula said.

Rio has echoed this sentiment.

“We are actively seeking to reflect the wishes of the Mirarr People in our approach to the funding of ERA’s rehabilitation commitment having long understood their opposition to further mining on their country,” said Rio’s chief executive for Australia, Kellie Parker.

“We believe the successful rehabilitation of the Ranger Project Area, which is of critical importance to the Mirarr People, Rio Tinto and ERA can be achieved in a way that is consistent with the Mirarr People’s wishes. This remains our utmost priority and commitment.

“We are again asking the ERA IBC to urgently develop a workable plan to fund the increased rehabilitation costs.”

Rio said that ERA”s funding solution should reflect a fair value taking into account the material cost overruns and the interim funding requirements for the Ranger uranium project, and that the funds raised would be dedicated strictly to rehabilitating the asset, and not to any future developments.

The fair value should also reflect that the Mirrar People’s consistently publicly stated opposition to the development of the Jabiluka uranium deposit.

Rio said on Friday that the company remained committed to ensuring the rehabilitation of the Ranger project is completed to a standard that would establish an environment similar to the adjacent Kakadu National Park and continues to provide technical support to the project.

When ERA failed to raise enthusiasm for its A$300-million capital raise initiative, Rio submitted a proposal to ERA to provide additional project support, on a cost-recovery basis, which included organisational and technical support and the secondment of Rio personnel into certain specified roles.

The major on Friday said that this offer to ERA remained in place.

ERA previously stated that total rehabilitation costs for Ranger would range between A$1.6-billion and A$2.2-billion, and that the outstanding amount to complete this work is currently between A$1.19-billion and A$1.79-billion. At the end of June, ERA had A$132-million of cash on hand.

The federal government earlier this year introduced a Bill to Parliament to amend existing legislation to allow the government to oversee the clean-up of the Ranger uranium mine beyond 2026, and to ensure that ERA completed rehabilitation.