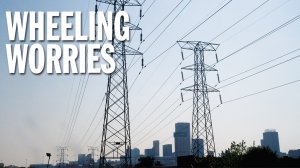 Tariffs and the legal framework governing the wheeling of electricity from independent power producers (IPPs), which are taking advantage of the recently declared 100 MW licence threshold, will be key factors in IPPs’ ability and willingness to feed surplus power into regional and national power grids, according to experts who spoke at a Nedbank Energy Dialogue on September 30.

Mineral Resources and Energy Minister Gwede Mantashe gazetted an amendment to Schedule 2 of the Electricity Regulation Act on August 19, following a directive from President Cyril Ramaphosa earlier this year, to increase to 100 MW the licensing threshold for private power producers, as part of government’s effort to mitigate load-shedding.

Eskom research, testing and development senior engineer Dr Ulrich Minnaar says the South African electricity landscape is changing rapidly – which has not been the case for many years – with recent changes including the planned unbundling of Eskom, the new licensing threshold of 100 MW, a decline in electricity sales, the fifth renewable- energy bid window and the Risk Mitigation Independent Power Producer Procurement Programme.

A report by business management consultancy Nova Economics, commissioned by Eskom, found that every 1% of sales lost due to load-shedding results in a 0.4% contraction in South Africa’s gross domestic product, with the overall cost of load- shedding being about R9.53/kWh.

The 100 MW licence exemption threshold is expected to significant accelerate the roll-out of solar photovoltaic (PV).

“This will happen across the board, and we will see an acceleration in PV growth. PV [will] generally grow faster than what [was previously] expected; . . . mining and heavy industries will be the first movers, [and] will install the sort of systems and system sizes that will be closer to the 100 MW limit,” says Minnaar.

This, combined with other smaller installations, will ultimately result in surplus energy being generated by various businesses, leading to conversations about potentially selling this surplus to offtakers and, ultimately, the wheeling of that energy into power grids.

However, this will also lead to pressure points in the electricity supply sector, as the National Energy Regulator of South Africa (Nersa) will become flooded with requests and applications from power producers to connect to the grid.

“This will put pressure on [Nersa’s] processes and their people, until such a time that they get an automated and online system to conduct registrations,” he suggests.

This would affect municipalities and Eskom alike, as those wanting to feed into the grid would need to have power selling and buying agreements in place, and deal with the administrative and technical applications arising from the licensing and connection of these plants.

Minnaar says that, ultimately, wheeling will add variable power to grids, adding that this will require enhanced flexibility in transmission and distribution infrastructure, as well as steeper ramp rates during evening peak periods.

Nonetheless, additional wheeling might remove the need for Eskom to provide emergency power to keep its grid stable, including through firing up its open-cycle gas turbines – which are costly to run – during peak or emergency periods.

Minnaar adds that wheeling has been taking place across the national grid since 2009 and Eskom has had policies in place to deal with that since then.

Where the transmission and distribution infrastructure is operating at full capacity, grid strengthening may be required, which, Eskom estimates, will cost nearly R90-billion at current planning estimates, says Minnaar.

This investment includes more than 8 000 km of additional transmission lines and 53 000 MVA of transformers over the next 10 to 12 years.

“However, as each day passes, we are getting behind on this schedule,” Minnaar cautions.

The conditions under which the wheeling of energy between IPPs and offtakers can materialise require legal system agreements to be in place. These will either be with the buyer or the seller; where one of the parties is situated behind a municipal boundary, the municipality also has to sign an amended agreement, he says.

Commenting on regional and municipal wheeling connections, City of Cape Town green energy head Brian Jones says municipal electricity entities are locked into a regulatory regime and structure which limits them in terms of third-party involvement regarding the buying, selling and wheeling of electricity.

He says the city is aware that Nersa is working on an energy trading framework for the future. “We are not sure what it looks like, but we are compelled to act now and to facilitate the wheeling of energy.”

Jones describes electricity wheeling as an “awkward energy trading solution [but] it’s the best we have under the current regulatory regime”.

In terms of legal compliance, several issues require consideration, such as “who wheels to who”, wheeling energy balancing rules, tariffs and contracts, as well as Eskom-to-municipality wheeling metering data exchange.

The standards and operating procedures associated with connecting large generators to the grid is another challenge, Jones adds.

When energy is wheeled, that consumption “very rarely” balances exactly with what is being generated, he explains.

This brings about metering issues, with the City of Cape Town having adopted a half-hour metering schedule where, every half hour, metering will reveal either a surplus or a deficit of electricity on the city grid, providing an opportunity to add wheeled IPP electricity.

The city has chosen half-hour balancing because it is the “supplier of last resort; if there is a deficit, the city has to provide that energy and has to get it from somebody, which is currently Eskom”.

However, Jones notes that the city might buy electricity from any of the numerous generators through wheeling agreements in the future.

Half-hour balancing also prepares for real-time pricing in the future, and is a lot closer to near real time than monthly balancing.

It also facilitates the development of an energy market – allowing for the ‘greening’, to a limited extent, of consumption, which occurs outside generation times, he adds.

As for the City of Cape Town’s potential to add wheeled electricity to its grid, generators and offtakers must be connected at 11 000 V and higher, which is the same voltage as that supplied by Eskom.

As such, the City of Cape Town’s wheeling tariff is based on a half-hourly consumption rate, taking into account deficit and surplus energy figures that are aggregated monthly on a time-of-use basis.

However, the city has established a pilot set of wheeling rules, approved pilot-phase wheeling tariffs, and drafted an offtaker wheeling contract, a generator grid connection contract and use-of-system contract.

City Power renewable-energy chief engineer Paul Vermeulen says the prospect of wheeling from IPPs presents a “fantastic opportunity” for a fair share of distribution-connected embedded PV generation in metropolitan municipalities and other municipalities.

Wheeling of such regional electricity, connected to existing medium-voltage grids, has thus far proved to be “quite robust”, he adds.

Vermeulen says large shopping centres that have installed PV systems on their rooftops have had a minimal impact on local grids, as the surplus electricity fed into City of Johannesburg grids has dissipated quickly, mostly being absorbed and consumed by those in close proximity to the generator.

In terms of principles and rules for wheeling, the discussions that City Power has had so far concern permitting wheeling to a 400 V connection point to include smaller generation systems that are coming on line.

“The average size of commercial PV systems coming on line is around 350 kVA. That might still be big enough to consider for wheeling purposes.”

Vermeulen adds that, for wheeling purposes, City Power has proposed a time- discriminated embedded generation wheeling tariff, providing for nondiscriminatory access to any party that requires it.

However, the proposal still requires approval from the City of Johannesburg and Nersa, and this approval will be based on tariffs outside the normal tariff cycle.

In its proposal, City Power intends to charge an IPP network access charges on a per kilowatt/hour basis, aligned to a proportional share of the current yearly average gross margin on time-of-use-based energy supply to customers. That average margin is about 32 c/kWh, which would need to be increased by 14% to meet Eskom’s latest tariff increase, he points out.

This tariff structure is designed, Vermeulen says, to try to encourage the use of energy storage systems or to shape the profile of dispatchable generation on City Power’s side of the Eskom meter at the “right time”.

“Anybody who can generate power for us during peak on our side of the Eskom meter is doing us a favour and, in return, we will allow the price of the wheeling for that particular period to be the lowest,” he states.

As such, the speakers concur that for wheeling to become legal would require careful planning and implementation of tariff structures and associated contracts.