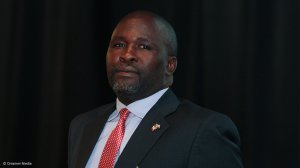 KEMPTON PARK (miningweekly.com) – South African mining industry stakeholders must collectively adopt the fundamental stance that if mines cannot undertake mining safely, they should not mine at all, until the necessary measures have been put in place to protect the lives of all mineworkers, Department of Mineral Resources (DMR) acting mines chief inspector Xolile Mbonambi said on Friday.

Speaking at the Southern African Institute of Mining and Metallurgy’s 2016 MineSafe conference, he emphasised that the DMR was “gravely concerned” about the continuing loss of life at mines across the country.

“The repercussions of fatalities go well beyond the boundaries of mines and have substantial socioeconomic impacts, impacting the hardest on the poorest of the poor in the country and in the communities of neighbouring countries as well,” Mbonambi stated.

He remarked that it was very important for the DMR to continue to determine the reasons for the occurrence of fatalities at mines.

Mbonambi added that, based on the DMR’s preliminary findings, it had issued a number of Section 54 and Section 55 work stoppage notices this year. He explained that the department had found that such stoppages were needed to prevent workers operating in unsafe work areas, which provided mines with the opportunity to ensure they fixed these problem areas.

“I would like to urge all employers, and mine managements teams in particular, to take more responsibility for the health and safety of their workers. We should not place more value on profit margins than the lives of workers.

“Without mineworkers there would be no mining sector. We should, therefore, continue to work together to improve health and safety of mineworkers,” Mbonambi stressed.

Moreover, he pointed out that that it was of “great concern” to the DMR that, in the year to date, there had been 61 fatalities recorded in the mining sector with gold (27) and platinum (22) having been the biggest contributors to this “worrying tally”.

Mbonambi pointed out that this was a major setback for the industry, which had consistently recorded improved health and safety records over the past 20 years, and which had achieved its lowest ever fatality number (77) in 2015.

He urged gold and platinum miners to pay more attention to preventing falls of ground, transport-related accidents and the spread of respiratory diseases which continued to be major causes of loss of life at mines.

He said the DMR would continue to work with mining companies to support all health and safety initiatives. “However, we expect companies to fulfil their commitments and that they do not just look good on paper, but strive to achieve genuinely positive results in preventing the loss of life.”

Further, he noted that there was also a need to ensure that mineworkers had the knowledge and skills to exercise their rights to withdraw or refuse to undertake unsafe work or to work in dangerous environments. “The DMR continues to receive reports of intimidation and victimisation of mineworkers, who decide to exercise their rights in this regard,” Mbonambi revealed.

He stated that “all employers should walk the talk”, as the department could not continue to condone poor compliance with mine standards, as this was resulting in the loss of life at mines.

Mbonambi also called upon mineworkers to not risk their lives in an attempt to achieve production bonuses.

“The DMR has issued directives for all mines to be more vigilant and implement measures which will safeguard the lives of mineworkers to ensure the industry aim of causing zero harm to all mine employees,” he noted.

INDUSTRY AWARDS
Meanwhile, during the MineSafe conference, industry awards were presented to those companies that had achieved outstanding safety, health and environmental performances in the South African mining industry.

The health and wellness award was presented to the company that had made a significant advancement with regard to its employees and/or the surrounding community in which it operated. Diversified miner Vedanta Resources’ Black Mountain mine, in the Northern Cape, was the winner of this category.

The award for the top environmental programme went to the company that had implemented a project that had a significant positive impact on the environment. This was awarded to diversified miner African Rainbow Minerals’ Nkomati mine, in Mpumalanga.

The top award for the diamond industry went to diamond miner Petra Diamonds’ Finsch mine, in the Northern Cape. Glencore’s Magareng mine, in Mpumalanga was first in the base metals category.

A JT Ryan Trophy was awarded to a surface miner and an underground miner, respectively, which recorded the lowest TFIR during past year. The trophy for surface operations went to gold mining company AngloGold Ashanti’s Savuka gold mine, in Gauteng, while the underground trophy was won by platinum producer Lonmin’s 4B/1B shaft in the North West.

The final award of the event was the award for the most improved mining company in terms of safety performances, which was won by the Glencore’s ferroalloys division.