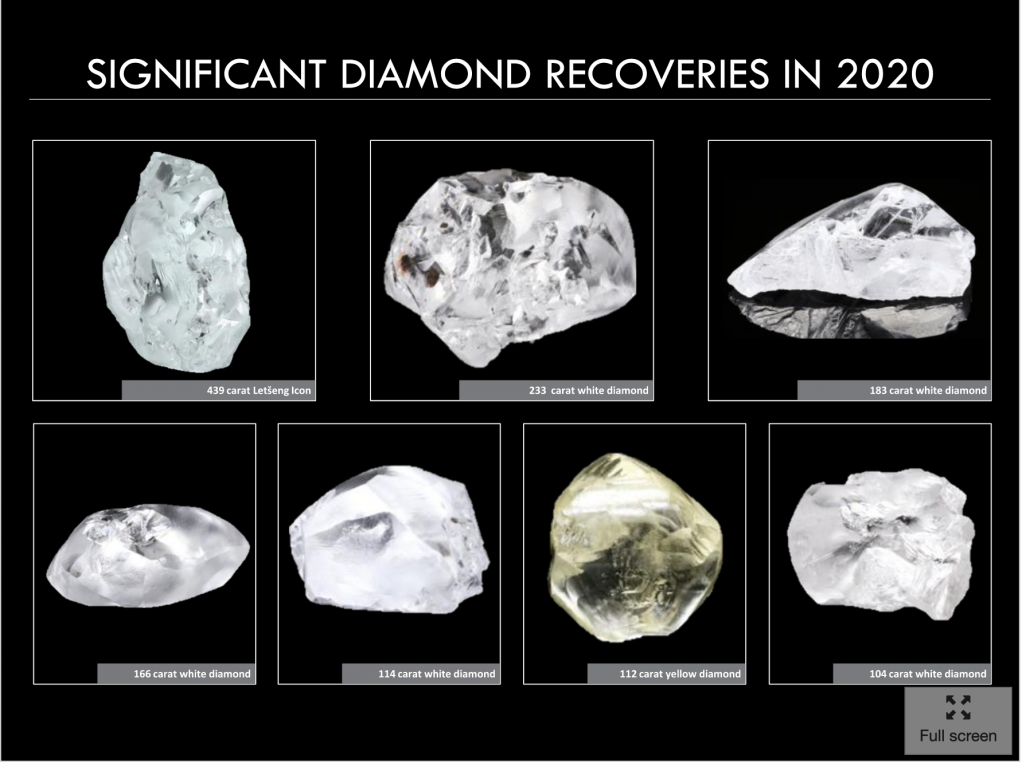 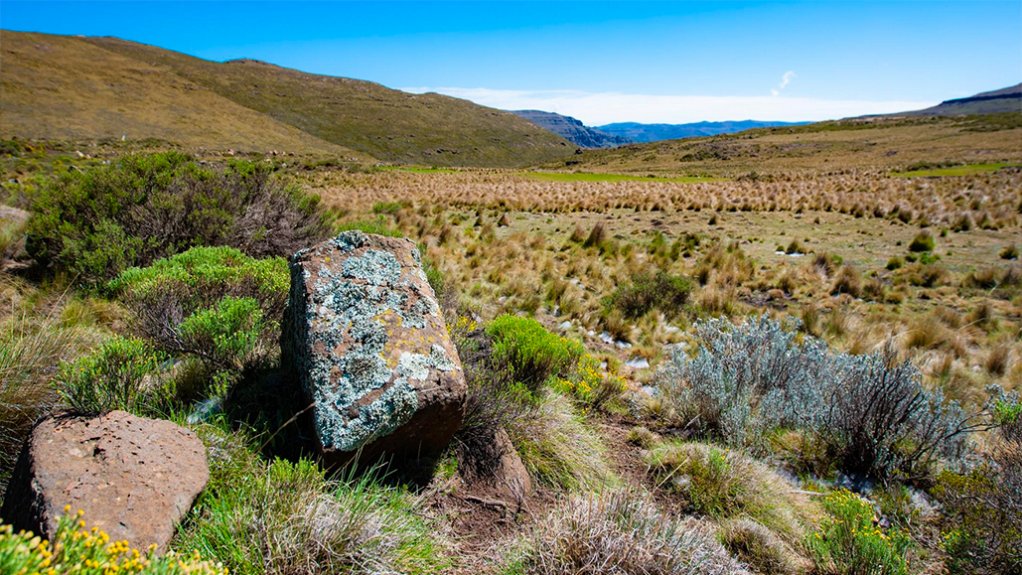 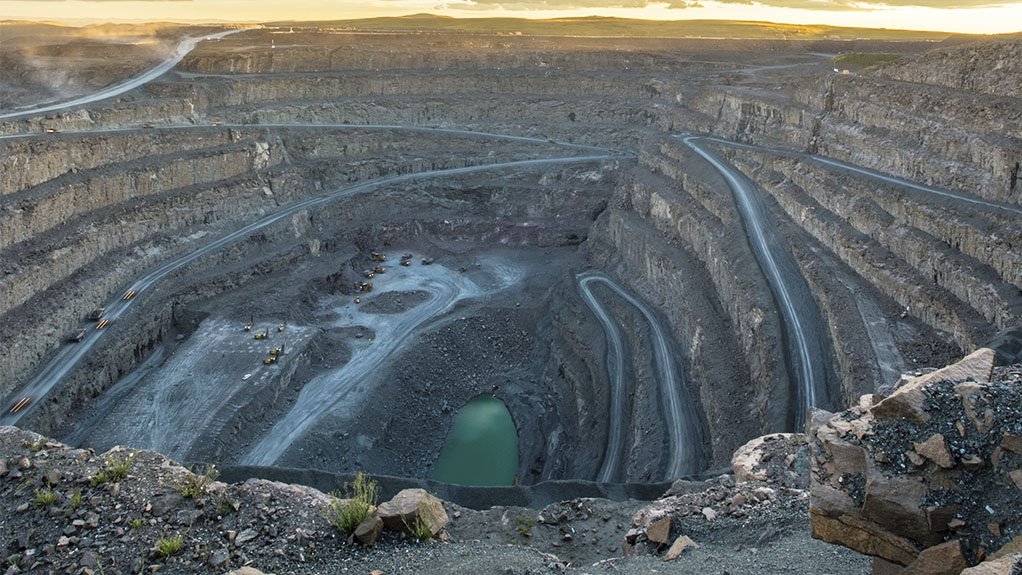 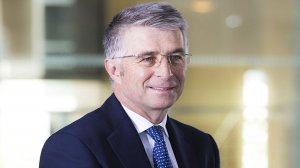 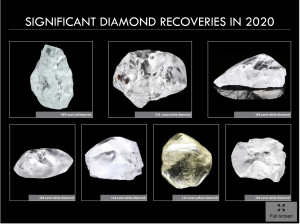 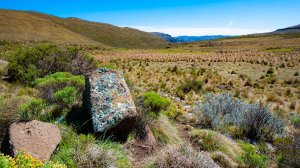 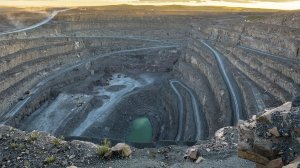 On revenue of $189.6-million and underlying operational earnings of $53.2-million, Gem directors have proposed dividends of 2.5c a share in a year in which it recovered 16 diamonds larger than 100 ct each compared with 11 in 2019. (Also watch attached Creamer Media video.)

Its Letšeng mine, located in the Maluti mountains of Lesotho, is known for the recovery of large quality diamonds, including 2020’s 439 ct Letšeng Icon, which the company displayed during the presentation, along with six other large stones, one of them an 112 ct yellow diamond.

Elaborating on damage-reducing technologies, Elphick said at the presentation covered by Mining Weekly: “There are two aspects to it. The one is to get the diamonds out of the rock using non-mechanical means. We’ve ticked the box there. That has gone well and we're very comfortable with the final stage of the process.

“The first stage of the process was to see the diamonds in the rock. That didn’t deliver as well as we thought it might do. We have brought that plant back to Johannesburg. We have pulled it apart, taken out what wasn’t working. We're busy putting it back together again. Of course, as things move, computing power improves. The detection units are improving as well as the pixilation capabilities, and so we are upgrading that plant and moving to pilot plant two.

“The ambition remains the same: to be able to see diamonds in a certain size of rock and then to be able to eject them at the speed which is required to meet a commercial need. We can do this at slow speeds but that doesn’t really help us. It’s a question of improving and making this faster. So, technology advances, we seem to rush forward and then crawl forward and then have a rush forward, and that’s exactly where we are. We’ve got a team coming here from Europe in the next month to take this forward to the next step,” Elphick outlined.

Letšeng has an opencast life-of-mine that stretches to the 2030s. “We’ll need to start looking at the underground, and that will come at some point in time,” said Elphick.

On Gem’s climate-change adaption plan, Elphick spoke of the company’s adoption of the United Nations Sustainable Development Goals requiring considerable effort: “A lot of work goes into this and we make a major effort there,” he said.

On the 2020 diamond market, he noted that demand growth, particularly in China, the US, India and Australia, was showing strong post-Covid recovery, which was pushing its way through to stock market valuations. “And we know there’s a correlation between stock market valuations and diamond prices; that correlation was a little bit disturbed, but is now back, we think, with diamond prices rising quite strongly. Inflation started to appear but very much recent information it seems as it’s not quite as frothy as one might have expected, but no doubt as the world roars back from the Covid crisis, we may well see some inflation, and, of course, that’s helpful for diamond prices,” he said.

He described the 2020 holiday retail season as being strong, with the maturing Chinese and Indian consumer markets continuing to show strong growth trends.

Midstream inventory and debt levels decreased substantially and this part of the diamond pipeline was in relatively much better shape than for some time.

“And we’re not finding, at this point, the synthetic diamonds are having any impact on the demand or the prices for the sorts of goods that the Letšeng orebody delivers,” he said, adding that being the highest dollar per carat kimberlite producer was a good position to be in.

“We’ve had a good year in terms of recoveries on almost all categories, but particularly the top end,” he said.

Elphick said Gem had been participating in trials to capture additional value, involving its goods being polished into the high-end luxury brands strategy, and the company was capturing some of the additional value between rough and polished and finding its way into the brand. So far we’ve had a good experience and we’re pushing these trials out further to see what it might mean in the longer term. We're quite excited about that,” Elphick said.

In response, Elphick said: “Diamonds are carbon so it is difficult to sell non-carbon diamonds. I’m not trying to be facetious, but we haven't got into this in as much detail as your question is assuming.

“If you wouldn’t mind us coming back to you in time with a more considered answer to get into best practice, but at this point, frankly I don't have an intelligent answer to give you. Buying carbon offsets – that’s the same issue.

“With respect to replacing fossil electricity with renewable energy, we have looked at this in some detail, particularly solar and wind, and the combination. We have assessed this quite often and unfortunately the outcome of that is not good enough from a cost perspective to make a transition right now.

“It is moving in the right direction and there will come a minute when that is right. Of course, we have to also assess, not just a straight-forward cost question, but the cost of not doing this and what that does to our contribution to the planet. It’s not just a simple cost answer, but just to give you comfort there that we have looked at this in great detail over a number of years,” Elphick said.

Earnings a share from continuing operations were 12.1c and cash on hand $49.8-million as at December.