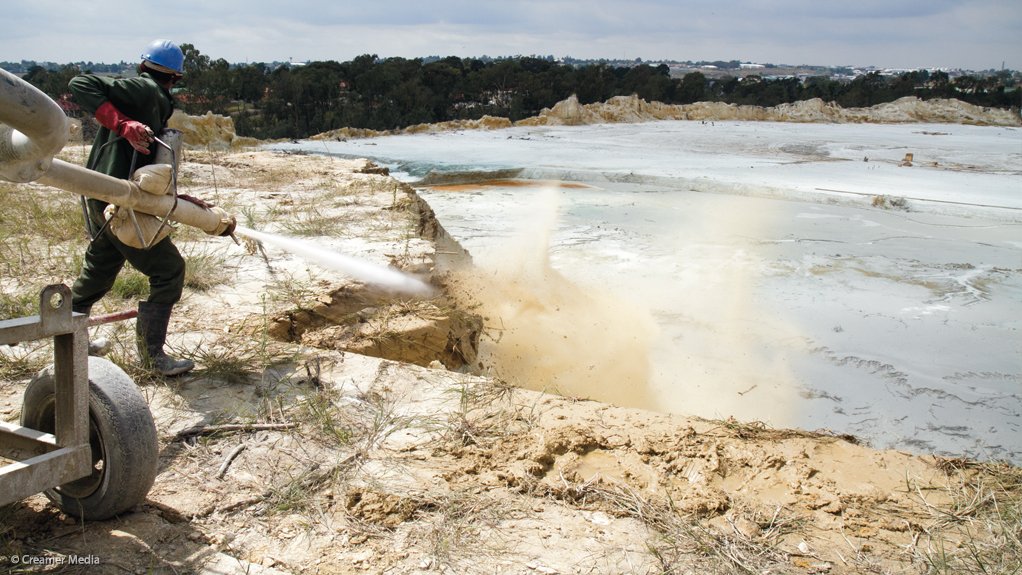 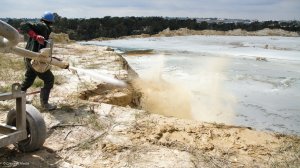 In the late 1880s, when the first miners started driving their tunnels through the hard quartzite rock below the Witwatersrand, digging deep to extract the region's vast gold wealth, they could not have foreseen the dangerous legacy their activities would leave for future generations. Now, well over a century later, the derelict shafts give up no precious yellow metal, but hundreds of millions of litres of acid mine water.

Acid mine water is produced when a mineral known as iron pyrite -- commonly found in gold mines, and often called fool's gold because of its similarity in colour to the real thing -- comes into contact with the water that starts rising in disused mine workings. Sulphuric acid is produced once the iron pyrite reacts with air and water.

It is a problem the Department and Ministry of Water and Sanitation has had to get to grips with in recent years. Acid mine water, also referred to as acid mine drainage (AMD), poses a great environmental challenge for those mandated to ensure a secure supply of safe, potable water to the region's inhabitants. Left unmanaged, the water

level will increase in old mine workings until it reaches the surface, overflowing into nearby streams, rivers and wetlands.

Long before it overflows, however, AMD may contaminate groundwater, which many communities depend on for drinking. It also has the potential to threaten ground stability.

In 2010, a growing awareness of the rising water in the Witwatersrand's old mine workings led the Cabinet to set up an Inter-Ministerial Committee on AMD. The committee brought together several ministries, which were tasked with ensuring an adequate and timeous response to the threat.

Five years later, much has been accomplished, and there are plans to do more.

Those dealing with it have divided the Witwatersrand into three distinct entities: the Western Basin, beneath Krugersdorp and Randfontein; the Central Basin, under Johannesburg; and, the Eastern Basin, beneath the towns of Springs, Brakpan, Benoni and Nigel.

The department has adopted a two-phase approach to tackle the problem. The first and most urgent involves neutralising the acid mine water, and reducing the level of dissolved metals it contains.

Between December 2011 and May 2012, an emergency treatment plant was established in the Western Basin, where water had started overflowing from old workings. The operation involved refurbishing an AMD treatment plant near Krugersdorp. The plant belongs to Sibanye Gold. It makes use of a shaft pump station which also belongs to the company.

This plant is currently treating about 30 million litres a day, which is discharged into the environment.

While the emergency operation stopped the overflow of acid mine water in August 2012, the level of the water in the Western Basin remains above the environmentally critical level (ECL) of 160 metres below surface. The department estimates that, at current pumping rates, dropping the water below the ECL will take about four years.
Sporadic surface decant still occurs in this region following periods of high rainfall. To prevent this, additional work to increase pumping capacity was started at the plant in October last year, and is scheduled for completion in June.

In the Central Basin, a fully-fledged AMD treatment plant is ensuring that AMD is neutralised and discharged to the environment. It is currently treating an average of 60 million litres a day. At this rate, it is keeping the acid mine water below the ECL.

A similar plant is being built in the Eastern Basin. Set for completion in April next year, it will be capable of treating between 80 and 110 million litres a day. This is expected to keep the water below the ECL.

While the first phase involves neutralising the acid mine water and minimising its environmental impact, the second will require desalinating the still salt-laden water the treatment plants discharge.

The department believes it is critical the impact of this salt load on the Vaal River system (VRS) be reduced. Currently, this is done through the periodic releases of large quantities of fresh water from the Vaal Dam.

A study carried out by the Department warns of potential risks to the Vaal system from 2017/18 onwards, because there may not be enough water at that time to continue such dilution. The study further predicts that, even taking into account the increased flow of water into the VRS from Phase Two of the Lesotho Highlands Water Project from 2022, there may still be a water deficit.

The Department is aware the challenge to the VRS is critical, but believes this can be overcome by desalinating the AMD. After removing the salt load, the purified water can be re-used.

It has conducted a feasibility study, and identified a long-term solution to address the Witwatersrand's AMD-associated social, economic and environmental risks. The proposed aim is to ensure water security in the VRS and a concomitant beneficial re-use of treated AMD.

Pending the agreement of those Ministers serving on the Inter-Ministerial Committee on AMD, relevant agencies will be directed to implement this solution.

The Department is also talking to other government departments and state structures on further initiatives to manage AMD in the Witwatersrand. These include, among others, research to support future planning and optimize decision making, and applying cost-recovery mechanisms to ensure that the mining sector contributes to AMD mitigation.

The Department is also intensifying its efforts to pro-actively respond to AMD and mine water challenges nationally. While the main focus is currently on Gauteng, a lesser though still serious threat from AMD exists in the Free State, KwaZulu-Natal, Limpopo, Mpumalanga and the Northern Cape. These potential threats have been recognized, and the Department has started assessments to quantify the problem and ensure new mines and mines that are still active take steps to mitigate AMD.

An internal AMD and Mine Water Management Unit will be established to ensure an integrated and composite approach. The functions of the unit will be aligned with the objectives of the Department's annual performance plan.

Eliminating the challenges posed by AMD is a priority, and the Department will not take its eye off the ball.