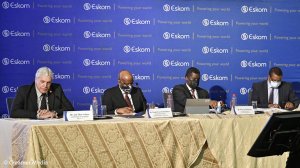 When Eskom announced the RMR in early 2020, it indicated that it expected that the intervention would help ease, albeit not eliminate, the risk of load-shedding by about October this year.

However, COO Jan Oberholzer reported on Monday that the recovery effort was taking longer than initially envisaged and had also been set back, initially, by the onset of Covid-19 and, more recently, by the hydrogen explosion at Medupi Unit 4 in August, which caused severe damage to the generator, as well as a fire, in September, at the Kendal Unit 1 generator transformer.

“Initially, we believed that 18 months of implementing reliability maintenance would take us to a situation where we could minimize and reduce the risk of load-shedding – we never said that we would eliminate load-shedding.

“However, what has happened with Medupi 4 and Kendal 1 has set us back quite drastically,” Oberholzer said, while restating Eskom’s long-standing position that the country required between 4 000 MW and 6 000 MW of additional capacity to create the space required for Eskom to implement the RMR.

Progress to date has been disappointing, with the energy availability factor (EAF) of the coal fleet having slumped to below 65% for the year-to-date, precipitating periods of load-shedding.

The current EAF is well below Eskom’s 70% target and is also significantly below the 67.9% reported for the same period to the end of September 2020.

As of October 25, Eskom had resorted to 29 days of load-shedding since the start of its financial year on April 1, most of which having been implemented at Stage 2, representing simultaneous rotational cuts of 2 000 MW.

During Eskom’s full financial year to the end of March, 47 days of load-shedding were declared.

The load-shedding prognosis for the rest of the current financial year remained precarious, owing to high levels of unplanned outages and Eskom’s commitment to continue with the RMR.

Oberholzer said the poor performance had been exacerbated by the Medupi and Kendal incidents, which added 1 300 MW to the utility’s long-term unplanned losses, which have averaged above 11 600 MW for the year to date

Breakdowns had typically surged to above 15 000 MW during bouts of load-shedding, as was the case with the most recent cuts in late October.

Unplanned load losses have averaged 23.1% for the year-to-date, against a target of 18%, with partial load losses contributing a whopping 4 612 MW.

Planned maintenance has been sustained at the 9% target level, or above 4 500 MW.

Group executive for transmission Segomoco Scheppers reported that the summer plan had been adjusted for what would be a protracted outage at Medupi Unit 4, where the final incident report was still to be published.

The plan pointed to a higher-than-planned dependency on diesel generation to manage the power system this summer.

The utility had already spent R2.44-billion on diesel by October 11 to operate its open-cycle gas turbines (OCGTs) and was poised to exceed its projection of spending R4.1-billion on the fuel for the year as a whole.

Eskom’s reliance on the OCGTs was unlikely to be sufficient to shield South Africans entirely from load-shedding, however.

In fact, Scheppers cautioned the public to “expect an increased risk of load-shedding while the RMR programme was being implemented”.

“For the most part the System Operator will need to source operating reserves from demand response products, as well as from emergency reserve sources, such as interruptible load-shedding and OCGTs,” Scheppers explained, when delivering a presentation on the ‘summer plan’.

The plan’s base case – which models for ongoing RMR at about the 9% level, as well as unplanned losses of no more than 12 000 MW – assumes only a day of load-shedding at Stage 1, together with a R2.5-billion diesel bill.

Once an additional 1 000 MW of unplanned losses was added to the base case, however, the number of days of load-shedding increased to 40, at Stage 2, while the cost of diesel rose to R6.7-billion.

The prognosis worsened considerably in the event of 2 000 MW being added to the base case, with 94 days of Stage 3 load-shedding and diesel costs of R13.5-billion.

Group executive for generation Phillip Dukashe stressed, however, that Eskom had no intention of pulling back from the RMR to lower the risk of load-shedding, arguing that the maintenance backlog remained at the heat of the generation plant’s lack of reliability and unpredictability.

Nevertheless, the programme was facing financial, skills and planning headwinds, which had delayed implementation.

The utility had been planning to implement 84 outages during the current financial year, but ten have already been deferred to the 2023 financial year, while 22 were deferred from earlier in the year into the second half. By the end of September, only 18 outages had been completed, nine were in execution.

“Most of these were deferred because funds were released late,” Dukashe said, indicating that, given Eskom’s poor financial state, there was also a trade-off between the resources used for diesel and those available for maintenance.

Eskom has set aside about R8-billion for maintenance this year.

He said the lack of skills and experience in planning had also become a serious impediment to executing the maintenance programmes on time.

In addition, the backlog at certain stations, such as Tutuka, had risen to “shocking” levels, owing to neglect and “wrongdoing”.

“RMR has been running for more than year, but it will take much more than a year to go through all the stations, all the units that we have and to do so thoroughly.

“RMR is the right programme, but it needs to become the norm – that’s how you plan outages, that’s how you execute them – so we need to go through that process and re-instil the disciple that used to be in generation in the way we carry out our maintenance programmes,” Dukashe said.